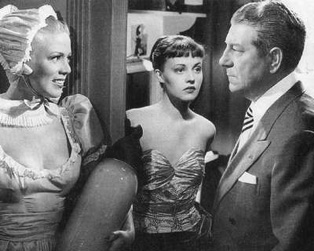 Film noir was originally a French invention, a definitional concept or generic construct imposed on certain American films of the mid-1940s by post-war French critics beginning in 1946. Touchez pas au Grisbi is a paramount example of cultural cross-fertilization between France and America. French crime films, after the self-consciously theoretical ‘invention’ of film noir by such key critics as Nino Frank and Jean-Pierre Chartier, as well as Raymond Borde and Étienne Chaumeton (whose 1955 Panorama du Film Noir Américain was the very first book-length analysis of the mode), took on a harder, tougher edge. They were faster paced and more kinetic; there was more overt violence, so the body counts got higher, and glossier women were more forcefully roughed up by thugs who dressed in sharper suits and hats than their 1930s counterparts. Crooks even started driving oversized imported American convertibles around Montmartre, refusing to keep a low profile. In terms of location, these films moved out of the working-class neighborhoods or provinces and started inhabiting the more glamorous parts of Paris. Thus, the ‘poetic realism’ of such pre-war crime films as Le Jour se lève (Marcel Carné, 1939) and La Bête humaine (Jean Renoir, 1938) gave way, in the late ’40s and early ’50s, to the série noire films like Quai des Orfèvres (Henri-Georges Clouzot, 1947) and Touchez pas au Grisbi (Jacques Becker, 1953) that announced their American stylistic influences up-front. American crime narratives (cinematic and fictional) struck a meaningful chord in the French after their traumatic experience of World War II, and writers like David Goodis, James M. Cain, Cornell Woolrich and Jim Thompson were lionized by the French in ways they didn’t experience at home.

In fact, in its day, Becker’s film was well-respected enough for Jean Gabin to be awarded the Best Actor prize at the Venice Film Festival for his carefully contained and rueful performance as an aging hood out for one last heist to put him on easy street (he played virtually the same part again ten years later in Mélodie en Sous-Sol, with Alain Delon). A comfortable retirement is the ultimate desire for many criminals who are also, deep down, good bourgeois Frenchmen. And this hood is quintessentially middle-class in his style of living and highly performative sense of domestic proprietorship (there’s a great extended sequence of Gabin and his partner-in-crime eating a midnight snack of paté, washed down with a special white wine in an apartment that has an elaborate industrial-strength lock on the inside of the front door). We don’t get much of an indication that he’s even a criminal, since we don’t see him pull off the job, only the desperate, and doomed, effort to preserve the spoils of crime a month after the job.

One of the great things about Grisbi is that the carefully delineated procedural conventions of the post-war heist film established by such influential American entries as Criss-Cross (Robert Siodmak, 1949) and The Asphalt Jungle (John Huston, 1950) aren’t of interest to Becker. Indeed, Becker’s film doesn’t even bother to show the heist itself, merely a newspaper report of it. What’s of more interest is the complicated and violent aftermath. Presumably the heist of 96 million francs in gold bullion from Orly Airport was easy; the hard part is waiting out the period it takes for the loot to ‘cool off’ so that it can be fenced. Beset by a rival gang coveting the swag, and in danger of inadvertent betrayal by Riton (René Dary), a sexually insecure and cuckolded partner-in-crime, Max (played by Gabin) serves as the subdued center of a noisy and cluttered world of tawdry nightclubs, sinister restaurants, and explosive roadside shootouts. Max is weary of the greed and stupidity of the underworld from which he wishes to escape. And out of Gabin’s thin lips come such muttered, grim phrases as “Je m’en fous” (“I don’t give a damn”) and “J’en ai marre” (“I’m fed up”), expressing an exhaustion that might seem defeatist or even nihilistic, except for the unassailable loyalty to the pathetic Riton that gives Max his nobility and admirable moral strength.

So Grisbi patently elevates male homosocial desire above any other kind of love, and Max’s seeming indifference to, or contempt for, underworld women (like Jeanne Moreau’s lacquered Josy) exemplifies the degree to which post-war French crime films, like their American counterparts, could reduce women to dangerous and decorative objects. One of the most startling examples of the genre’s retrograde sexual politics is embodied by Lola (played by the too-aptly named actress Dora Doll) in her baby outfit, carrying a huge bottle of milk as a prop for a nightclub routine and proud that her bib is short enough to reveal acres of cleavage. Betty (played by Marilyn Buferd) is one woman, at least, who merits Max’s amorous attention, but only because she’s not one of the molls or showgirls who swarm around suckers like Riton and Angelo (Lino Ventura) and, in Max’s words, “use [them] up.” She’s got ‘class,’ even though she’s as ornamental and materialistic as every other woman on display in the film. Betty represents a world to which Max aspires, but can only attain through illegal and illegitimate means. Gabin gives a great performance of a man who wants to be in a totally different milieu, but only knows one way to gain access to it – a futile and destructive way of living which he himself has come, tragically, to recognize well before the film ends with a harmonica tune spun mechanistically on a Wurlitzer juke-box imported from America.