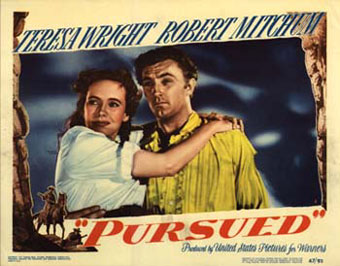 Terminally interrelated by an unseen narrative event, the obsessively stubborn characters found in Raoul Walsh’s 1947 nightmare-western Pursued all but shadowbox with the demons they have inherited from dubious ancestors. Just as blood ties are hopelessly intertwined and family bonds are made tangible by deceit, extremes of denial here prove to be the rule rather than the exception as Pursued sets about regurgitating the repressed with a vengeance.

Shot for United States Pictures from a Niven Busch screenplay, Pursued is less a traditional western than it is a collision course for the disparate elements of genre. Configured as a confessional flashback evoking at once the fatalistic narratives of film noir and one of its masterpieces, the other great Robert Mitchum vehicle released that year, Out of the Past (Jacques Tourneur, 1947); sharing almost interchangeable titles, both films advance per the popular ’40s precept of having the key male character recount an anguished back-story to a female beloved. But unlike Tourneur’s detective thriller, the hero of Pursued, Jeb Rand (Mitchum), is suspended for most of the movie in ignorance. Haunted by an abstract childhood memory (and perhaps the sight of Judith Anderson on all fours), the younger Jeb is first glimpsed being prised by his soon-to-be surrogate mother from the remains of an abandoned shotgun shack. What might be a model for Jack Ruby’s Skyline Lounge, this ruinous location provides perhaps the only clue accounting for Jeb’s suspicious past. “If that house was me”, intones Mitchum much later in the film, “what part of me was buried in those graves?”

Justified paranoia aside, much of the movie’s potency derives from what lies beneath. With most of the significant action staged at night, Walsh’s honed nocturnal atmosphere corresponds with the shrouded psychological headspace of Mitchum’s rancher. Implored from an early age by Ma Callum to forget his recurring nightmares, Jeb, oblivious to a vendetta held against his blood relatives, evolves into the film’s resident minority figure for whom the more established men of the town will continually direct their murderous anxiety. A moving target (sometimes quite literally), Jeb, despite Ma’s inference that he belongs to her family, continually finds evidence to the contrary. Insofar as the lissom narrative proves pathological in dispelling this misnomer, Jeb by all evidence might inhabit the role as quintessential outsider better than all others on offer. And there’s a bunch going begging. Failing to fulfil the parts of son and brother, he’s also an uneasy fit with the traditional romantic figure, his surrounding community, the army and the dusty landscape (often obscured as an insignificant presence against New Mexico’s rocky mesa). Immediately establishing a rivalry with half-brother Adam (played as an adult by John Rodney), constant brawling and the latter’s Old Testament name alone imply a biblical pairing far closer to Cain and Abel. Meanwhile their sister Thorley (Teresa Wright), laboured with the responsibility of juggling her sympathies between the two lads, represents the extreme polarities of Jeb’s escalating neutral estrangement. Forgoing any semblance of a traditional marriage, she puts a real dampener on their wedding night, when as if proving she still has some hereditary ties with their crackpot mother, materialises at once into the ultimate noir heroine: Jeb’s potential lover and killer.

Although the mother figure in a Walsh film quite often plays a pivotal part in the hero’s psychological (under) development, this patently oedipal theme would not reach an explosive apogee in such action films (or at least for Walsh) until White Heat (1949). However Pursued, like that subsequent gangster movie, raises a question predicated upon the “unknown quantity” located within an American family. Much like Edmond O’Brien’s infiltration of the Cagney gang in White Heat, Mitchum’s restless existence is wrought mainly from his otherness. Defined for the most part as a loner, he finds suitable support and even friendship from casino-saloon owner, Jake Dingle (Alan Hale). Dingle might be his only mate, but sometimes in a western (especially those being made by Howard Hawks or Delmer Daves) that’s all you need in order to survive.

For all the western iconography and James Wong Howe’s typically high contrast lighting, the performances of Pursued are often inflected towards psychological melodrama. Wright especially, (having had her part written for her by then husband Busch) spends much of the movie a borderline neurotic, moving in front of the camera with her back arched like she’s running into a 50-knot headwind. In contrast, Mitchum, during a period where being framed by crooks and sometimes the cameraman seemed like the most natural thing in the world, plays the troubled Jeb with fatal insouciance. His attempts to avert a shootout with milquetoast Harry Carey Jnr (after he steals a dance from Thorley) might be one of the most impassively violent duels in Walsh’s oeuvre. A staggering sequence of deep focus, chiaroscuro lighting occasionally illuminated by flashes from the reports of the guns, is virtually wordless save for a barking dog disturbed somewhere in the distance and the oppressive summer night echoing with incessant cicadas. While on animals, the best scene-stealing moment of the film goes hands down to Mitchum’s pony. During another gunfight with an unidentified enemy who’s raining fire on him from atop a ridge, the beast continually distracts from the actor (no small feat) by raising one of its hind legs every time a squib explodes as if in heightened suspense of the scene’s outcome. Other visual evidence of Walsh’s brogue humour comes when Ma Callum scoops a pail of water from a horse trough and spills it with disregard over her boys, entwined in a fight like they might be two mad dogs. Yet insofar as the charming interludes provide brief respite from the mounting tension and Jeb’s deteriorating sense of self, this is an essentially cruel world. Porches are less designed to capture the panoramic view then they are platforms for men to be repeatedly knocked off while the closest thing to a Haymaker in this southwest province just might be a landed punch.

Equally forthright, Walsh’s camera surveys the action and the faces of the anguished actors in swift gliding moves. Barely eschewing the schizophrenic genre leap that takes place in the second half of Walsh’s They Drive By Night (1940), Pursued with its own distinctive after dark beat melds baroque stylistics with the brooding issues concerning the hero’s tortured identity. The overall effect like much of Walsh’s work is akin to attending an engagement party where the guests are all strangers. As the night builds to drunken climax, characters come to blur so closely in the memory that once it’s eventually over you might feel like you’ve just woken up from a five dollar night with a five hundred dollar hangover.