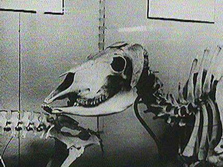 Arthur Lipsett’s N-Zone is the longest, loosest and last of the collage films he produced at Canada’s National Film Board (NFB). It marks the end-point of his trajectory from feted young genius to discarded problem child/eccentric within the NFB. Lipsett’s N-Zone begs comparison as poor cousin to Chris Marker’s Zone in Sans Soleil (1982) and Tarkovsky’s in Stalker (1979).

Lipsett’s first film Very Nice, Very Nice (1961) had been a finalist in the short fiction film section of the 1961 Academy Awards. It started as an impressive sound collage with images added at the suggestion of his superiors within the NFB. The mythology goes that this work also captured Stanley Kubrick’s attention and consequently Lipsett was invited to make the trailer for Dr. Strangelove or: How I Learned to Stop Worrying and Love the Bomb (1964), which he declined. The sampled nature of the eventual trailer was possibly influenced by Lipsett’s style and compositional strategies. Another celebrated connection with the mainstream cinema of ‘Spectacle’ was that Lipsett’s 21-87 (1964) impressed George Lucas in his student days and influenced his short student film that explored issues of surveillance and identity: Electronic Labyrinth: THX-1138 4EB (1967), a film that was later the basis for Lucas’ first feature of the same name THX-1138 (1971) (1).

One of Colin Low’s (producer and defender of Lipsett at the NFB) anecdotes suggests how far Lipsett’s star had fallen by the time N-Zone was made. Low relates the viewing of some rushes (possibly from N-Zone):

He showed me the rushes of a later film, and I thought it was incredibly self-indulgent, and I told him that. There were scenes of people high, on pot or something, staggering around an apartment – I just didn’t understand. I got very upset, and I said, ‘Arthur, the Film Board ought to fire you because that’s dumb stuff’ (2).

In an article that offers telling insight into Lipsett’s troubled life and character, Lois Siegel documents that after his departure from the NFB his creative output became more problematic and his behaviour more erratic, culminating in his suicide in 1986, just before his 50th birthday (3). It is important to understand that his mother had also killed herself, an event he had witnessed at the age of ten. The trauma of such a defining childhood experience may well have influenced his own final act as well as contributing to the dark and disjointed world-view so articulately presented and replayed in his apocalyptic films.

Lipsett was a gleaner, scavenger and collector of discarded odds and ends of sound and film. He was familiar with the work of his contemporary, Bruce Conner with whom he is sometimes compared. In this digital age of media jamming, sampling and repetition, such fossicking, collecting and re-ordering have become pervasive and often oppositional artistic strategies. That he was able to pursue this then distinctive line of investigation within a cultural institution like the NFB is today quite surprising in itself.

What helps his work stand apart is its emotional dimension. Pre-eminent Culture Jammer Craig Baldwin has noted that in his films, Lipsett “is trying a choreography of emotional expression” (4). Using society’s discarded “offal” to critique consumption and Cold War dread to signify a kind of “anti-will” to mass suicide, he invites us all into his nightmare. Such activity resonates with the inner world of this tortured soul, this split and fractured self. The snappy, dark and intense collage of Lipsett’s short work speaks directly to the contemporary sense of disconnectedness and fragmentation many feel in our over-mediated environments.

N-Zone shoots for a larger canvas. Lipsett wants to go inside these disruptions and dissociated spaces, to inspect and contemplate their emptiness. The ritualised intimacy that dissipates like a slowly deflating lead balloon is not communicated in the same didactic and serial manner of the earlier work. We are dealing with more than collage here, in the teetering, slightly unwieldy labyrinthine structure of this film. The body of the film consists of footage of gatherings of folk Lipsett shot himself. Fred Camper notes that in N-Zone Lipsett “knew very well the origins of the footage of groups of people, also having filmed a friend’s family and a group of friends himself for it” (5).

Clearly Lipsett sees the connections between humans as problematic: “Their own connection to other people are rotten. They are based on deception, lies!” (6) It gradually transpires that all that is communicated between these actors – in their various phases of immobility, in their domestic spaces, through their deflating absurdity of gesture and half sentences – is nothing. Have they become vegetables? At one point the “z” of “zone” is replaced with an “n”(and zone becomes none).

This nothing is punctured by segments of recycled film that shock/displace/panic the group dynamics. Mesmerised mice chase their tails in an infernal/eternal returning. Exotic emblems of elephants, camels and dead fish make their deaths and entrances. Do the fish represent a festering inertia? Is the loyal elephant the keeper of Lipsett’s secret burden, the keeper who never forgets? Is not the camel the ideal animal to carry this load across the most searing of territories: the N-Zone?

It has been suggested that the idea of the fugue is a useful one in analysing the structure of N-Zone (7). This word has both a musical and medical meaning: “A fugue in music is the foremost type of contrapuntal composition and is a dialogue between the parts or voices, which together weave the tapestry of the whole” (8); while “Fugue is also a psychiatric term, first used in 1901, with a figurative meaning of ‘a fleeing [from one’s self]’ and a more precise meaning of ‘a dissociative reaction to shock or emotional stress’” (9). These meanings can be woven through this film to construct its Janus-like face. The idea of the non-narrative structure using repetition and emotional resonance is a musical one that relates to the long tradition of visual music in film art. A Buddhist chant and some oriental singing are used on parts of the soundtrack. The relationship of all the elements, the objects moved from hand to hand, the words spoken, the images and sounds, are like a cast of characters woven together in a musical score, echoing each other.

So let’s try to get to the question of what the film means; the idea of fleeing from one’s self clearly fits in with an erasure or refusal that is communicated to me by N-Zone. We are witness to Lipsett’s psyche hitting the wall. This is a not a celebratory experience. The N-Zone is a landscape of fumbling denials. A sense of “non-being” is communicated, a state often situated within the colonial experience: It is The Seekers singing “Island of Dreams” without the dreams. There is no magical inner chamber called “The Room” within the “Zone” as in Tarkovsky’s Stalker, where your innermost wishes are granted. Here your dreams don’t come true.

Towards the end of the film, some footage is repeated of two men in white coats passing through a gate marked with a nuclear danger sign. They methodically inspect and record details of the plants in this fenced-off zone. Is this what is left of the asylum? In the end we are left hanging with the thought that Lipsett became what he collected: a discarded reflection suspended in a landscape of denial.