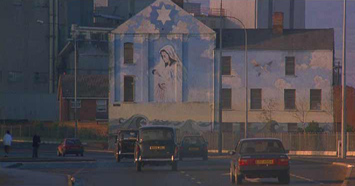 Alexander Walker died earlier this year. It may seem perverse to begin the annotation for a film by stating that a curmudgeonly film critic has passed away instead of referring to the work’s director or writer. But Hidden Agenda had its first, loudest and most vehement critic in Walker. His outburst during the film’s Cannes press conference at Loach and screenwriter Jim Allen sparked off the controversy that surrounds the film in the UK to this day. Walker, a Belfast born critic, used his widely read column to attack many releases – The Devils (Ken Russell, 1971), Crash (David Cronenberg, 1996) and Oodishon (Takashi Miike, 1999) are just a few examples – provoking many a censorious campaign. But Hidden Agenda was the only time he unleashed his vitriol for political, as opposed to moral, reasons. To look at the problems Loach and Allen caused their detractors is probably the best way to assess the effectiveness and power of Hidden Agenda.

The most obvious condemnations attack the film’s veracity. The plot revolves around the illegal execution of a civil rights lawyer and subsequent investigation conducted by a police inspector, Kerrigan (Brian Cox), and the victim’s partner, Ingrid Jessner (Frances McDormand). Although the story is told through fictional characters, the film links it to the existent conspiracy theory put forward by a former British Intelligence whistle-blower, that during the ’70s a consortium of politicians, high-ranking members of the security forces and heads of industry operated a dirty tricks campaign to unseat the two main political parties’ leaders, Prime Minister Harold Wilson and Conservative opposition leader, Edward Heath. The right-wing British press dismissed the claims in the ’80s but the left-wing press noted Loach’s inclusion of them within his film. “The film combined the John Stalker and Colin Wallace affairs effectively enough to be described as ‘the IRA entry at Cannes’ by one Tory MP.” (1) Loach sidesteps his audience’s scepticism about this secret history by first placing it in the mouth of marginalised rogue agent, Harris (Maurice Roeves), in a dingy backroom of a breeze-block social club. Loach allows his audience’s avatar Kerrigan to initially reject the theory as nonsense – “You want wrapping up in a blanket!” – just as he suspected the British public would. It is only once the theory is repeated to Kerrigan by the British head of security in a country house that Loach assumes the audience now considers his fiction to be based on fact (2).

Loach accentuates this method of slowly immersing the audience in a pool of evidence by filling his frame with extreme close-ups of objects when his protagonists get near the truth: a parcel, a tape recorder, a surveillance report, a Polaroid. Yet he often keeps the information supplied by these objects obscure, blurred, unheard. Kerrigan and Ingrid are framed tightly whenever they make a discovery yet are lost in expansive off-centre long shots whenever they are compromised. The film seems lit only by natural light and there is little camera movement adding to an impression of cold, hard evidence being presented unadulterated.

The still remaining contention surrounding Hidden Agenda is one of representation. “It misrepresented the British Army in Ireland as the forces of darkness and the IRA as a cheery bunch of folk singers, democrats and humanitarians.” (3) Loach is famous for using non-actors from the milieu he is working in to play roles in all his films. Jim McAllister, a Sinn Fein politician, takes the role of an area representative for the party. McAllister’s character lays down a justification for IRA activities comparing their actions to the historically vindicated campaigns of George Washington, Jomo Kenyatta and Archbishop Makarios. How far you agree with these comparisons depends on your own politics but Loach and Allen’s film took the unprecedented step of allowing Sinn Fein a free voice in the mainstream media. In a period when Republican politician Gerry Adams could only appear on the news with an actor’s voice dubbed over his words and The Pogues were pulled off a live broadcast when they sang “Streets of Sorrow” on terrestrial television, this was a bold and dangerous move. Critics who accuse Loach of presenting the Republican argument without objective balance ignore the fact that at that time no one was allowing Sinn Fein or the IRA to enter into any mode of formal debate.

Loach never glorifies the Republican movement, even if you can tell his sympathies lay with the socialist ideals of some of its factions, but as a documentation of the untold side of the Northern Ireland conflict Hidden Agenda does fail to address one vital group: the innocents who have to live with these hostilities on a day-to-day basis, who are only ever cursorily mentioned and never shown. Loach may avoid images of the civilian dead to evade cheap ‘girl in a red coat’ sentimentalism or to avoid entering into a tit-for-tat argument over how much collateral damage the IRA have caused over the security forces. More likely, however, he is attempting to show how little either group cares about those that get slain, a callousness unforgivable for a group of “freedom fighters” and even worse for a police force from a democratic country. Still Loach wisely sets his film “a few years ago” as by the time he was filming in Belfast the IRA had all but abandoned any left-wing ideals and were funding their violence through drugs and prostitution, criminal activity for its own sake having replaced reunification as the end goal.

Loach not only challenged perceived conventions of the terrorist organisation but attacked the RUC as an out-of-control militia (4). Loach used the film to publicise the evidence pointing to an unofficial “Shoot to Kill” policy concerning the six counties. During a press conference Ingrid is prompted to read the statistics that the mainstream press seemed reluctant to publish. Between 1969 and 1980, 130 people had been shot dead by the RUC, UDR and British Army, half of whom proved to be civilians. Loach’s intention was to make clear that there was a civil war going on in Britain and that the cruel calculations of the government were just as reprehensible as the terrorists. A face-off between Kerrigan and Belfast police Chief Brodie (Jim Norton) reveals the crux of Loach’s assertion.

BRODIE: The RUC do run covert operations but so do the IRA. If you want to bring home the bacon, you first of all have to kill the pig.

KERRIGAN: What the fuck are you people running here? Your own private shooting war?

BRODIE: Checks and balances, Mr Kerrigan, but between the jigs and the reels we are winning and innocent lives are being saved.

Whether he had previously been powerless to find funding in the Conservative dominated ’80s or unable to choose which problem needed addressing first, Hidden Agenda can now be seen as Loach’s renaissance as an important director. The last 13 years have proven to be the belle epoque for a director whose politics and devotion to his own truth means he still faces as many critics as supporters. This has culminated in the masterworks My Name is Joe (1997) and Sweet Sixteen (2002) but Hidden Agenda, made just as Thatcher was usurped by her own party, was where Loach rediscovered his inimitable voice.

As Britain emerged from the spell that Thatcher had put on it, I and perhaps some other filmmakers, felt very dissatisfied with ourselves. We felt we hadn’t really put on the screen the appalling cost in human misery that aggressive Thatcherite politics had brought on everybody. We should have made films in the early ’80s that really showed what was happening, but I know that I didn’t. I think the last few years have been an attempt to remedy that. (5)