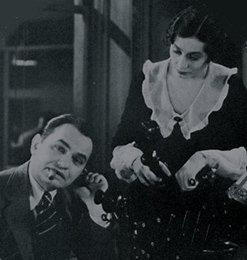 Phillip (Anthony Bushnell): “I hate these plays that make heroines out of…”
Jenny (Marian Marsh): “ladies with a past?”

When, midway through Five Star Final, Jenny Townsend finishes her fiancée’s sentence for him, she has no idea that she is a product of just such a past. It’s all her mother (Frances Starr) can think of, and the tension on her face is excruciating. Twenty years ago Nancy Voorhees was a stenographer impregnated by her boss and acquitted by a jury after shooting him to death. Today she is Nancy Townsend, no longer an unwed mother, anticipating the imminent wedding of her own daughter, and deeply in love with her husband, Jenny’s stepfather Michael (H. B. Warner). But she correctly senses that her constructed life is on the verge of being shattered.

Five Star Final is perhaps the darkest in the cycle of journalist-themed films produced in Hollywood during the early 1930s (1). The central character, a self-destructive tabloid newspaper editor named Randall (Edward G. Robinson), manufactures so much enthusiasm for an assignment to dredge up the Nancy Voorhees case for a sure-fire hit serial that he destroys her in the process. This character was modelled on former tabloid editor Louis Weitzenkorn, author of the hit play of the same name that opened at New York’s Cort Theatre on December 30, 1930. Soon after, “Boy Wonder” director Mervyn LeRoy scouted the production on a trip to New York and agreed to film a version of it, which was then released on September 26, 1931. Weitzenkorn’s play underwent some interesting changes during the nine-month gestation period between its initial performance and the film’s first screening (2). For one, the self-referential quip from the dialogue cited at the opening of this article is an addition to the film version. It’s notable in that hearing it takes the movie-goer momentarily out of the story, but also reminds him or her that it’s not necessarily so different to read the salacious detail of a woman’s fall than it is to watch a film or play about it.

There are numerous more substantial differences between the film and play. Much of the play’s first act is reshuffled in order to give Edward G. Robinson a dramatic entrance. After several scenes featuring Randall’s secretary Miss Taylor (Aline MacMahon) fending off inquiries regarding his whereabouts from reporters, readers, and even the publisher of the Gazette (Oscar Apfel), Robinson’s character is shown in faceless close-up, scrubbing his hands in a speak-easy washroom, seizing a shot glass from the hands of an underling and downing it as the camera pulls back to reveal his face. This is efficient movie storytelling at its finest; in just a few frames we are shown the three habits Randall has cultivated to help him cope with the trauma of his predatory profession: drinking, mistreating his staff, and trying to wash the dirt out of his scandal-stained hands. This hand-washing is never mentioned in the play, which portrays Randall as an extremely effective muckraker, but doesn’t provide many cues that might have guided Robinson to play him as guilt-ridden bluffer, over-exuberantly heeding the will of his publisher as if he knows it will somehow prove how wrong he is.

The alteration of a clergyman character named Dr. Isopod (Boris Karloff) is particularly interesting in light of the Motion Picture Production Code of 1930 (3). In Weitzenkorn’s play Isopod is the Gazette’s Religious Editor, a minister who has lost his congregation as a result of his association with the tabloid. He is assigned by Randall to don a collar and insinuate himself into Nancy Voorhees’ life for just long enough to extract a scoop. A masher and a heavy drinker, he is clearly a disgrace to his profession. In the film version, Isopod is essentially the same, but it’s emphasised that he was kicked out of divinity school. Robinson exclaims at one point “No minister in the world would touch this kind of stuff”, a statement seemingly aimed directly at local censor boards. For good measure, a scene is added in which Michael Townsend appeals to an authentic minister to help keep the story out of the Gazette.

Though the Production Code was not taken seriously by most filmmakers until 1934, it did contain a section on religion that stated: “Ministers of religion… should not be used in comedy, as villains, or as unpleasant persons”. Boris Karloff’s portrayal of Isopod arguably flouts all three, or would if not for the technicality that Isopod is not actually a minister in the film version. Clearly there was a certain amount of self-censorship that took place even before enforcement of the Code in 1934. Still, Five Star Final, filled with semi-salty reporter dialogue, sympathy for criminals, and allusions to rape, adultery, and suicide, could not have been made a mere three years later (4). This is ironic, as the moral debasement the Code was aimed at halting in the movie industry closely parallels the debasement of news media standards attacked in Weitzenkorn’s play and LeRoy’s film.