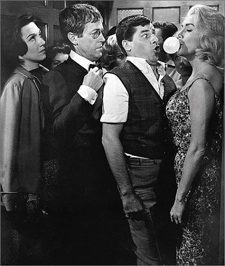 While four anthologies of writing from Cahiers du Cinéma have been published in English, it’s taken 50 years for the release of a similar collection from their peers and rivals at Positif. The Cahiers anthologies reflect the magazine’s many changes, but unlike it, Positif has stayed true to its original vision. While Cahiers currently seems to be desperately searching for an identity (taking in new media, pornography, video games and television – the American TV series 24 made their Top 10 list last year), Positif has retained the same basic format for years. Each issue includes relatively lengthy Q&A interviews, reviews, a ‘bloc notes’ section (a sort of monthly diary in which a critic offers his or her commentary on events in and outside the film world) and a ‘dossier’ containing several essays on a theme or filmmaker. While the magazine is edited by an unpaid committee of 21 writers, Michel Ciment has nevertheless become its public voice.

By necessity, this anthology gives only a partial view of the magazine. For one thing, given the book’s space limitations, it only includes reviews, albeit some long enough to qualify as essays. They range from the snappy to the scholarly; at best, they’re both. Almost every review is filled with literary references. While the magazine’s proclaimed connections to surrealism are sometimes difficult to spot (apart from its love for the gameplay of Luis Buñuel, Peter Greenaway, David Lynch and Raul Ruiz), its writers’ erudition is quite impressive.

A further limitation imposed on the anthology is that it only includes positive reviews. While Positif has certainly toned down its polemics, it’s still capable of blistering attacks. During its Cannes coverage, several writers accused Irreversible (Gaspar Noé, 2002) of being a grossly immoral celebration of violence. A handful of films, like Funny Games (Michael Haneke, 1997) and Sombre (Phillippe Grandieux, 1998) have divided the editors so strongly that they ran positive and negative reviews side by side.

Cahiers du Cinéma and Positif have been rivals for almost their entire existence, with seemingly innocent films and filmmakers getting caught in the crossfire. Safe Conduct (Bertrand Tavernier, 2002) was seen by Cahiers as a defence of the Tradition of Quality and implicit attack on the New Wave, even though it’s mostly about the French Resistance. Positif‘s endorsement of the film – which included an entire dossier devoted to it – certainly didn’t raise Cahiers‘ opinion. However, no issue of Positif goes by without a potshot at Cahiers. The entire editorial of its November 2002 issue is an attack on the latter’s trendiness and ongoing dismissal of British cinema.

The book never acknowledges the back-story behind this debate. Positif always considered itself as a magazine of the left, while Cahiers started out apolitical at best and conservative at worst. Ciment’s introduction glosses over the aesthetic impact of this rivalry, mentioning only that the magazine ignored Hitchcock and Rossellini because other critics defended them on quasi-religious grounds. One has to turn to Jean Douchet’s book on the New Wave to read some of Positif‘s vicious pans of Godard films. This anthology only contains a handful of casually disparaging references.

Ciment’s introduction proudly proclaims the magazine’s leftist politics, yet they’re hardly perceptible in every review. Not surprisingly, they’re most evident in the reviews from the ’70s, though even then the magazine refused to treat politically progressive films as sacred cows. Paul Louis Thirard’s review of The Sorrow And The Pity (Marcel Ophüls, 1971) kicks off with a proto-Serge Daney discussion of the relative freedoms inherent in film and television, before revealing Ophüls’ complicity in fictionalizing his documentary. As it turns out, he allowed several of his subjects to script their interviews. However, Thirard doesn’t condemn the film, preferring to ponder the wide range of possibilities available between pure fiction and pure documentary.

In The American Cinema, Andrew Sarris took an anonymous dig at Jerry Lewis specialist and lookalike Robert Benayoun. Benayoun’s piece on Lewis is one of the high points of the collection, although it’s bound to reinforce stereotypes about the mysterious love ‘the French’ have for the comic. Before analyzing the films, Benayoun contributes an effusive ode to Lewis’ entire persona and lifestyle. It would be impossible to write such a piece today without sounding sarcastic. However, Benayoun’s enthusiasm and willingness to put himself on the line, even at the risk of looking ridiculous, are refreshing.

Four out of five of our magazine’s writers were present that evening at the cinémathèque where, without fanfare and an audience of, at most, twenty people, the masterpiece A Generation was screened, and at the end we looked at each other the way people do at a moment of discovery. For us a director had been born…enthusiasm and a lack of caution won out and we all agreed: “Wajda is important.” With hope and apprehension we waited for the second film by this young Pole. Was he what we imagined? (43)

The book and magazine rarely use the word auteurism, but its impact on their taste is unmistakable: every film by Robert Altman, Theo Angelopolous or John Boorman is guaranteed a spot on Ciment’s annual Top 10 list.

Positif‘s interest in covering new filmmakers has remained, but brio has faded in later pieces. In some cases – Yann Tobin’s review of City Of Sadness (Hou Hsiao-hsien, 1989) and Philippe Rouyer’s review of Lost Highway (David Lynch, 1997) – the short reviews are too superficial. Other, longer pieces such as Stéphane Goudet’s Abbas Kiarostami article are too dry. (By contrast, one of the longest and most scholarly pieces in the book, on Agnes Varda’s 1961 Cleo From Five To Seven, still has room for in-jokes.) These flaws may stem from the final section’s commitment to the canon of late ’80s and ’90s world cinema: Hou, Kiarostami, Edward Yang, Jane Campion, Krzysztof Kieslowski, Mike Leigh and the Coen brothers. No genuine discoveries here for anyone who paid attention to film festivals during this period.

Frustratingly, this anthology makes a great case for the vitality of Positif‘s first 30 years and then suggests that it gradually petered out. However, the most recent issues of the magazine challenge that impression by incorporating reviews – which may not be Positif‘s current strong point – into a larger context. Even the feud with Cahiers, as silly as it often gets, sometimes leads to lively debate. Positif Fifty Years presents a one-sided view of the publication, which doesn’t do its recent period any favors.