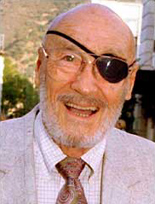 Life is a betrayal. And you know, sometimes you betray yourself too you know. Let’s have the guts to admit it. There isn’t anybody born here lately, who didn’t play dirty sometime somewhere in his life. So why do you hide it? Truth, honesty, that’s my key.

André de Toth is one of the most elusive and deceptive of all directors who worked in classical Hollywood cinema. Few of his films are regularly screened – except perhaps the often gruesome 3-D extravaganza House of Wax (1953) and the Gary Cooper vehicle Springfield Rifle (1952) – and little critical writing exists on his work. Routinely overlooked in histories of the medium, de Toth is a largely forgotten figure, often merely cited as the one-eyed director who surprisingly made a brace of 3-D movies. (Two exceptions to this critical orthodoxy are the directors Bertrand Tavernier and Martin Scorsese, who provided evocative introductions to de Toth’s 1994 autobiography.) Even those critics who do refer to de Toth’s work struggle to differentiate it clearly from that of his more lurid American contemporaries such as Sam Fuller, Robert Aldrich and Anthony Mann, though the astringency and sober matter-of-factness of many of de Toth’s best genre films actually provides a fascinating contrast to the bold, primary-coloured iconoclasm of the work of these other directors.

De Toth’s cinema often sounds as if it is soaked in the violence of American individualism – it is a notoriously difficult cinema to evoke or describe without falling into a set of blunt existential clichés – but on closer inspection his work is often chaste, with violence mostly suggested rather than directly seen. When violent actions are shown they tend to appear with little fanfare, often confusing the audience in terms of what has happened, to whom and why (simultaneously opening up questions of justice, moral right and the multiple, complex repercussions of any single action). De Toth is more accurately compared with his émigré contemporaries such as Robert Siodmak, Max Ophüls, Curtis Bernhardt and Fritz Lang. His focus on tortured domesticity – even in a number of his Westerns – finds a counterpoint in several Lang films (Scarlet Street [1945], Clash by Night [1952]), but de Toth’s measured, quizzical but predominantly humanist tone contrasts to Lang’s coldness. 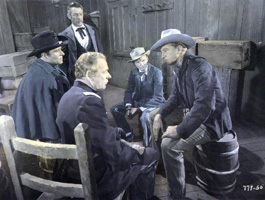 De Toth is mostly discussed as a maker or master of B-movies but his output is more internally consistent than this suggests, and the intimate scale of his often psychologically focused, distanced and domestic films, is less predicated by budget than design. (For example, the less-than-spectacular trappings of the A-grade Springfield Rifle – including its choice of rather generic locations – are a matter of aesthetic choice rather than economic constraint.) De Toth made films that are obsessed by the complex psychological impact of violence, betrayal, and exterior and interior space upon characters. It is in this respect that de Toth’s films can often seem so remarkable, or, in some respects, so mundane. The director’s best work combines an underlying ferocity with a surface muteness, a churning underbelly with an implacable, almost somnambulistic surface, a kind of slowness and attentiveness to the details of intimacy seldom associated with the action genres he predominantly worked within. Despite many similarities, the garish, histrionic and eye-popping landscape of Robert Aldrich’s genre-busting cinema contrasts with the equivocal, drifting quagmire of secrets and betrayals that characterises many of de Toth’s films.

Martin Scorsese classes de Toth as a ‘smuggler,’ a director who imported unusual and questioning ideas within the framework of Classical Hollywood cinema. This description is predominantly true as de Toth’s films rarely radically transform the genres they exist within. Nevertheless, they often do perform a transformation of a subtler and less spectacular nature. For example, Pitfall (1948) is amongst the most unusual of all domestic film noirs. Closer in tone to many of the family melodramas of the 1950s, it is notable for the emphasis it places on the subtle psychological effects of domestic incarceration. Almost everything in the film exists on a small, intimate scale, and though its elements are often quite menacing they often appear stumbled upon, or unfold in an equivocal or anti-climactic fashion. This film sets up conventional character types – the femme fatale, the brutal heavy, the aggrieved wife, the anti-hero whose one mistake sends him spiralling to inevitable doom – that it subsequently transforms into more complex and less dismissible or readable forms. Every character in the film is given the space to justify and explain their actions, and the ultimate fate of each is predicated upon the multiple connections that exist between each and every action and choice. Although the married couple are reunited in the film’s final, tortured moments, we are left with a stronger impression of the ‘other’ woman cut adrift by the choices that others have made for her. (And de Toth’s films are often remarkable for the living-and-breathing female characterisations they put on display.) In de Toth’s cinema everything is related, the triumph or uniting of any two characters counterbalanced by the fall, exclusion or death of one or two others. As Scorsese has stated, de Toth’s films are tales of survival in which “there are no happy endings, only ambiguous ones” (2). Even those endings which pose as ‘happy’ can be read in other ways, can be said to cut off other possibilities or point to a character’s withdrawal from the social world. (Ultimately, though de Toth’s characters are often alone it is their interactions with the social worlds around them, and the choices they make, that define them.) In the final shots of Ramrod (1947), the camera is finally contained within the domestic space, co-existing with the couple who have just closed the door. This portrayal of a hermetic world suggests the closed-off future domesticity of the couple, but also implies that the outside world is just too messy – and complex – to let such a blissed-out, if somewhat rushed-to, union exist within it. The film must exclude this world with its allegiances and treacheries in order to produce this ending.

The subtle rendering of space in de Toth’s films is one of their most remarkable characteristics. For example, the opening sequences of Pitfall and Ramrod predominantly eschew the use of point-of-view shots, routinely placing characters in a two-shot or the camera to the side of a character’s vision. This sense of removal contributes to the harshness of de Toth’s worldview that Fred Camper astutely discusses (3). While the characters often seem to be summing up their options, making their choices within the complex and treacherous world set out before them, we also are forced to watch them acting, moving and thinking within this environment. For de Toth context is everything – of society, human relationships, and the surrounding physical space. Although de Toth’s films routinely present sympathetic or at least plausible characters, it is these characters’ psychology and motivation that is the chief preoccupation. Unlike in many other psychological, even Freudian, noirs and Westerns, we are explicitly shown these characters from outside – we watch them make decisions while summing-up and judging their actions accordingly. This focus on the psychology and philosophy of characters within a labyrinthine environment is highlighted by the role that landscape plays in de Toth’s films. Whereas most Westerns or film noirs rely upon the overt symbolism of the landscape and what it embodies – as refuge, moral arbiter or living hell, for example – de Toth’s films in these genres de-emphasise these qualities. Like the audience, the landscape acts as mute witness to and stage for the entwined actions of the characters. 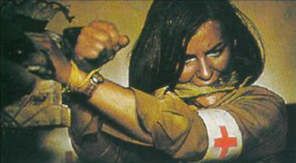 In many respects de Toth’s final, great film, Play Dirty (1969), can be seen as a crystallisation of his work. The underlying dystopian cynicism and bleakness – if de Toth made a comedy it would indeed be a very black one – of the director’s work pushes explicitly toward the film’s surface. The clear foregrounding of ideas of duplicity, treachery and disguise (hinted at in the title) is detailed in the opening scene: a British officer returning through enemy lines swiftly changes hats and twirls the radio dial from “Lili Marleen” to “You Are My Sunshine.” The clear moral distinction between Germans and Allies found in countless war films is here reconfigured as merely a question of affectations of style, a set of markers that are quickly exchanged and discarded. Although certainly about impure characters with questionable motivations, the film has a purity of purpose, offering a distillation of themes, character types, philosophies and actions. De Toth’s characters often wonder how long they will have to do penance for the mistakes and choices they have made. In Play Dirty, such venal speculations are jettisoned in favour of boldly presenting a set of increasingly obsessive but absurd actions against the shifting demands and allegiances of the bigger world that supersedes, crowds and, ultimately, belittles the characters. After completing their mission, the surviving members of the team, disguised in Italian uniforms, are carelessly gunned down by an arriving British soldier. In this moment, one can finally stare directly at the spare, blunt, muted anti-romanticism that clouds much of de Toth’s cinema.