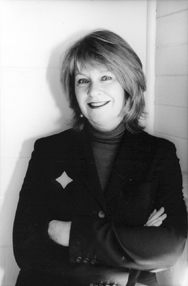 Rose Capp: Let’s start with a straightforward question: How did you get involved in the film industry?

Jan Chapman: When I was at university studying English and Fine Arts I met people who were making independent films, one of which included Phillip Noyce, who was my first husband. Then, I just got involved working on other people’s films. It was very hands on, very ‘pick up a camera, have an idea and express yourself’. At the time, Phil and people like Albie Thoms had started the Sydney Filmmakers Co-op; it was right at the beginning of all of that, in the late ’60s.

So I was just involved with a whole lot of people who were making films, and I was involved in the distribution and exhibition of them, which is very relevant [to her career today – RC]. One of the things about the Co-op was that they believed that you had to control the means of exhibition and distribution, which in fact I still believe!

RC: The issue of distribution, particularly the predominance of American films over local product, seems to be part of an ongoing debate in Australia.

JC: It’s frustrating, I don’t have trouble with them [overseas product] being shown, but there is a lot of issues, i.e., the returns to filmmakers, even on a successful film, are not reasonable given the investment. Also, the kind of film that’s shown is limited by those decisions but I also think some of them are very good. For instance, Palace has taken on a lot of films that may have been a little difficult.

But at that time [with the Sydney Co-op], it was terribly thrilling and exciting, to be right in the thick of it. I did learn an awful lot about the whole process, I drew on film, I knew how to edit, how to work a Bolex. I honestly think that is surprisingly powerful, and as I said at the Annual Longford Lyell Lecture, part of the Co-op was the Sydney Women’s Filmgroup and when I look back on those days and the influence of those women, I do think it had an enormous effect on me without me realising it at the time.

RC: Those initiatives, particularly women’s film collectives, were also developing all over the world during that period.

JC: It was very strong here. I remember going to England and meeting the people who worked for Spare Rib, which was a magazine over there. There were a lot of filmmakers, like Laura Mulvey, who were radical filmmakers. They were a lot more radical politically perhaps than I was. I was 19, and very shy. It would take me the whole meeting to get the confidence to say something. It wasn’t like it was easy!

RC: But those early days were clearly very formative experiences?

JC: Yes, I had a lot of encouragement from a lot of people, men and women. So I got a couple of grants to make very small films.

JC: Yes, I directed two or three short films, a drama and a couple of documentaries and one was called I Happened to be a Girl, which was about four of my women friends at the time who were basically pretty middle class. They talked about their aspirations. Now, historically, it seems amazing in a way. I guess it was true that in the early ’70s it was a great place to be a woman, that you were orientated towards thinking about being able to do whatever you liked.

RC: The ’70s represents a really interesting period, where there is an intersection between the feminist movement and filmmaking, so that a lot of the films of that period were personal and autobiographical.

JC: Yes, it’s true that that was to do with feminism, but it was also to do with a general film movement that was about self-expression, much more art-based. My whole thing about film has always been about personal expression. I’ve never really thought: I’ll get a job and I’ll have a career. It’s honestly true. Maybe we were lucky, that we could afford in that atmosphere somehow to have that freedom in our approach.

RC: You describe yourself as having a really intense relationship with all the films that you’ve produced, which I suspect is not necessarily a typical comment from a producer!

JC: A lot of them do, you’d be surprised!

RC: Maybe it’s just not something they admit to in public. But I wondered whether it also had something to do with the nature of the material you were working with. Your filmography is dominated by films directed by women featuring complex, central female characters.

JC: They are not all women, for a while that was kind of accidental. The things that attract you to an idea are so different all the time. As well as the films that I did with Jane [Campion] and Gillian [Armstrong], I also did a series of films for television about men. It was the Naked series, where I worked only with men. I guess I started thinking maybe I’d like to understand the other side! But I am interested in the nature of being human, how people handle life, what they want to do with it. In this short time you have, what really matters to you. In the early days it was a lot about romantic love and female consciousness.

RC: How and why did you make the shift from directing shorts to producing features?

JC: I didn’t chose it, it just happened, unfortunately in a way, though I think it’s where I should be. I worked at the Australian Broadcasting Commission (ABC) in the Education department. You’d made a film a week there; it was wonderful, again, dramas and docos. But I wanted to get into the Drama department, and I directed my first episode of a series, and again, there weren’t that many women doing that then. Sandra Levy was there at the time; then I was asked if I wanted to produce this series called Sweet and Sour. It was great fun, a mixture of drama and music.

Because I’d had all that experience both making short films and in the Education department, I was very used to starting an idea, getting the writers together and basically casting. Often when you are the producer on a TV series, you’re the one who does all that – some things that are actually more director roles on a feature film perhaps. So in a way, it sort of didn’t feel like I’d absolutely stopped directing, it felt like I was still creatively involved in the formation of the whole. The other thing that happened is that I did meet a couple of people who I thought were quite brilliant directors, Jane [Campion] of course, and Phillip [Noyce].

I think some people have a natural ability visually. Jane for example. For me, I couldn’t work it out. I didn’t feel it was quite as clear. I guess the script is what has always attracted me – the idea and the overall nature of what you’re going to do. It turned out to be a good thing that I ended up there, again in the Drama department, producing for about 10 years.

RC: When you are considering new projects, or reading a script, what is it that you are looking for, what attracts you to a script?

JC: It’s a hard question to answer because it’s a bit abstract. Consciousness, the sort of struggle people have getting along with each other, with themselves. I think there is humour in that, there is drama in that. I’m reading a lot of books at the moment, which is fabulous because I haven’t been doing that for quite a long time.

RC: What are you reading in particular, what’s on your beside table?

JC: I’m reading Nicky Gremell’s Love Song and a book by Emily Perkins. They’re both novels by women about women, so I guess there is still that interest.

RC: Do you read unsolicited scripts these days?

RC: I was looking at Walk the Talk (Shirley Barrett, 2000) again the other day, a film I admire very much but one that did not do particularly well in Australia. How do you feel about that film?

JC: It’s funny you should say that because this year I got the Chauvel award at the Brisbane International Film Festival, which was very sweet. David Stratton had me on stage and there were all these clips of the work that I had done, and I found it quite wonderful to have the chance to go back and look at it. He showed a section from both Shirley’s [Barrett] films, Love Serenade (1995) and Walk the Talk. They were both incredibly well put together directorially, such a strong vision that was funny and quite deeply moving.

Shirley was interesting to me because I kind of liked absurd comedy, and that was what I was attracted to in Jane’s early films, and Helen Garner’s too. I loved the awkwardness of the humour in those films. Jane suggested Shirley to me because she had seen her short film, Cherith, about a girl who is part of a very religious family who speak in tongues, and she feels she doesn’t fit in because she can’t quite do it. Again, it’s completely off the wall humour.

RC: I think that particular brand of humour is what is so distinctive about Walk the Talk.

JC: Certainly, when I read the script, I thought it was fabulous. I guess when I talk about liking films that deal with relationships and what matters in life, it can be hilariously funny as well as dramatic.

RC: You refer in your recent Longford Lyell Lecture to some pretty depressing statistics for women working in key creative roles in the Australian film industry. Do you want to expand a bit on this theme?

JC: I wasn’t particularly trying to make a big feminist statement, I was reflecting on how interesting it is that women have contributed to the overall nature of Australian films. I was trying to say, we are quite unique because of that, with Gillian Armstrong and Jane. You’ve got The Piano making its mark in Cannes and the Academy Awards, and My Brilliant Career (1979), which for its time was a landmark film. Americans are very interested in Gill; again, she’s got a slightly ironic take on women and her heroines are not conventional at all.

I just wanted to say, let’s not lose that, let’s not get back to all the boy’s stuff. There is a lot in stories that have a female perspective that may be epic, that may be more intimate and domestic, or they may be comic and absurd, like Shirley’s films. I think the convention that women do find it a little more difficult to take to the technical side of filmmaking is actually true, and I think this does need encouraging. Maybe this new movement, where people are making digital films might mean the technology is more accessible for women.

I was kind of surprised myself when I went along [to the Australian Film Television and Radio School] and there was this one year when there were no girls in the directing course. Personally, I’ve never felt that anyone was making it tough for me because I was a woman. I’ve actually had a lot of encouragement from people. Sometimes you just wonder if it’s being in the right place at the right time.

I do feel very fortunate, you know. I feel like I’ve had a fantastic time and I hope we’re half way there at the moment.