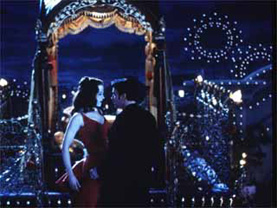 Rose Capp: This interview is part of a series of interviews with prominent women working in different areas of the film industry, and we were particularly interested in speaking to women who were involved in more technical, perhaps less conspicuous areas of filmmaking. You have a long and distinguished career as a sound and dialogue editor and a sound designer. Could you begin by telling us a bit about the distinctions between those designations?

Livia Ruzic: I don’t actually call myself a sound designer, except for non-feature productions where I was the only postproduction sound worker. It seems like everyone who works in sound adopts the sound design label, but I regard it as something very special. I see myself primarily as a sound editor.

On big budget feature films, the postproduction sound work is almost like an assembly line, with many sound editors working on different sections of the sound – effects editors, atmosphere editors, foley editors, music editors and dialogue editors. When I started out we were still working with magnetic sound and dialogue editing was probably the most time consuming of all the editing. It was and still is like patchwork – removing sounds from the original production recordings that shouldn’t be there, borrowing bits of sounds from other takes, smoothing out the edits, replacing any dialogue that isn’t clear with dialogue from other takes or with post sync dialogue. Now that we’re working with digital sound, it has become easier than it was back in the sprocket days.

RC: Your success as a dialogue editor is measured in effect, by the fact that no one would actually be aware of your work?

LR: Yes and the same might be true of the music. If the music is working, you generally don’t notice it. Dialogue is something that already exists in the original production recording; most people, even those working in other areas of filmmaking find it hard to understand what a dialogue editor needs to do to it.

LR: I was a film buff when I was in high school. At the end of high school, I went to Flinders University (Adelaide) to do a science degree. At the time, Flinders University was running a filmmaking course as part of their drama course. It was a 1/6th of an Arts degree. It was also the beginning of the South Australian Film Corporation. Sunday Too Far Away (Ken Hannam, 1975) and Picnic at Hanging Rock (Peter Weir, 1975) had just been made. Working in films suddenly became an option. When I was in high school I never knew that one could study filmmaking. After completing my first year towards the science degree, I changed all my subjects to arts, drama and filmmaking.

RC: What sort of jobs did you start off with?

LR: The first couple of jobs I did was as a sound recordist on documentaries and shorts.

RC: So in those early jobs, you chose to work in the area of sound recording?

LR: Yes, when I was at Flinders Uni doing the film course, I just always liked sound. I was always doing sound, I did sound on other student’s films.

RC: When you first started working on shorts and documentaries, were there many other women working in that area?

LR: No. I used to look at the names on the credit rolls of Australian films, and at that time there was only one woman, Helen Brown, who still works in postproduction sound.

RC: And what was that like, working in such a male-dominated environment?

LR: The majority of men working in sound editing are pretty decent individuals. But males still tend to edit FX. Women are much more likely to be dialogue editors.

RC: You’ve been working in the industry around 18 years; can you talk about some of the changes during that time?

LR: The 1980s were the busiest time in Australia. The first mainstream job I had was on Robbery Under Arms (Ken Hannam, 1985) in Adelaide. I got to know the sound editors who were all from Melbourne. At the end of the job I followed them and moved to Melbourne. In Robbery Under Arms I was an assistant, but by the end of the film, I was editing dialogue. The next job I did was as an editor, because there was so much work around. As soon as you had a bit of training, and knew a bit about what to do, you’d be promoted because there was so much work.

RC: In the course of your career, you have worked on shorts, documentaries, features and dance productions.

RC: You have worked on some pretty big budget features, most recently The Quiet American (Phillip Noyce, 2001). Can you tell us a bit about the experience of working on the film?

LR: That was more of an assembly line experience. I hardly had anything to do with Phillip Noyce. I was working under a sound supervisor.

RC: You’ve worked as dialogue editor on two Baz Luhrmann films, Romeo and Juliet and Moulin Rouge. In both these films, sound is a really critical element.

LR: Moulin Rouge was not such a big job for me as one of the dialogue editors because the characters sing—they sing a lot! Romeo and Juliet was a more dramatic experience, for everyone involved. At a certain point, the Americans (studio bosses) realised they had a big film and it had to be released on a particular date. It was a massive job. Everyone was working around the clock and having nervous breakdowns! I was just doing my little part in it. The politics of those big films is so messy. We went to (George Lucas’s) Skywalker Ranch to finish it off from there. Once we got there, the mixing date was already set, but there was still so much editing to be done. Every week, there would be test screenings in LA followed by a new version, followed by new rough mixes and all the tracks had to conform to that version.

RC: Romeo and Juliet is considered as one of the most successful of the contemporary Shakespearean adaptations for the screen.

LR: I think that if people really didn’t care to listen to the words being spoken they could listen to the music and watch the images—and the images are amazing. And all the performances were excellent, you couldn’t fault the Shakespearean English.

RC: The issue of collaboration is an interesting one. In your film work, when does the sound editor/designer get involved in the process, and does this depend on the approach of the director you are working with?

LR: It does depend very much on the director. If you have developed a relationship with the director, you become involved much earlier. With Sue Brooks and Sue Maslin (on the forthcoming Japanese Story), I went to the location where they were shooting and spent a week there. Often, postproduction sound starts when the film is locked off. It’s different on every production. Many decisions about the sound are made during the film edit stage. A lot of films now require rough mixes and the sound crew does become involved before picture lock off.

RC: How do you go about selecting which project to work on next?

LR: So far I have mainly chosen to work on certain productions because of the people involved; at times it was the director, but other times it might have been the film editor or the other members of the sound team.

RC: Do you think there is more awareness now of the role of sound design?

LR: I think that is true, though I still think that most people, when they think about sound in film, they still focus on the music.

RC: When you yourself are watching a film, can you ‘switch off’ from the sound and technical aspects of the film, or do you find you are always acutely aware of those elements?

LR: I do switch off. I am still a film buff. It is often on a second viewing, if I really like the film, then I focus more on the sound. But then it is often also the lack of sound, or the use of silences, that really interest me.

RC: Have you ever worked on a film that has no score?

LR: No, the only local feature I know of without a music score is Kiss or Kill (Bill Bennett, 1997). Shine (Scott Hicks, 1995) had many scenes where other filmmakers might have chosen to use music.

RC: What do you regard as your best work on film?

LR: I think I am most proud of my work as sound editor on the documentaries Pozieres (Wain Fimieri, 2000) and Sadness (Tony Ayres, 1999).

RC: What would be your advice to young women looking to work in the area of sound editing/design?

LR: I think the best way to approach it is to attach yourself to a facility. When I started out, each sound crew had several assistants and each feature sound crew was quite large. Now so many postproduction sound crews don’t have assistants.