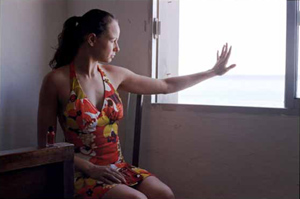 The WOW International Film Festival runs from 17- 20 October 2002 in Sydney, Australia, before embarking on a national tour. For more information, visit the Women In Film and Television NSW website.

As Oprah and gushing fans embrace the Divine Secrets of the Ya-Ya Sisterhood (Callie Khouri, 2002) and the syrupy sentiments therein, the 12th WOW International Film Festival is set to deliver a festival that shirks the “chick flick” label and truly represents the breadth and depth of women’s cinema.

As in all previous WOW Festivals, this year’s program includes the latest works by female directors, producers and screenwriters from Australia and overseas. However, organisers believe this Festival will be a signature event for WOW and its umbrella body, Women in Film and Television NSW (WIFT NSW), through both repositioning and content.

The repositioning comes primarily in the form of WOW’s relocation to the glamorous and cosmopolitan Cinema Paris, in the heart of the Fox Entertainment Precinct. Not only will WOW relish all the prerequisite features expected of modern day cinemas (Cinemaxx screens, surround stereo sound and comfortable seating with ample legroom), it will also benefit from the nightly and weekend human traffic drawn to Fox Studios’ restaurants, bars and other special events.

Significantly, the diverse content of this year’s Festival reflects a central, overriding theme – women’s quest for satisfaction, independence or command within workplaces, relationships and society. Simply stated, the search for a more meaningful existence.

This year’s Festival opens with an American favourite, My Big Fat Greek Wedding (Joel Zwick, 2002), a romantic comedy about Toula’s (Nia Vardalos) wedding to Ian (John Corbett), a tall, handsome teacher who is definitely not Greek. While experiencing the trials and tribulations of assimilating her fiancé into her typically huge Greek family, Toula becomes at peace with her own heritage and cultural identity. The film is based on the one-woman show written by and starring Nia Vardalos. Interestingly, a production team comprising Tom Hanks and his Greek wife, Rita Wilson, adopted the project. Australian audiences will welcome the role of cousin Nikki, played by Gia Carides.

Continuing the matrimonial theme is the feature-length documentary, Always a Bridesmaid (2000), directed, produced and written by Harvard graduate, Nina Davenport. Always a Bridesmaid is a confronting film as Nina investigates her obsessive desire to be a bride with the bemusing cooperation of her current boyfriend, ex-boyfriends, one-night stands, clients, friends and family. Underpinning Nina’s candid story is the irony of her chosen vocation – a wedding videographer.

Shifting continents, Satin Rouge (Raja Amari, 2002) is a French/Tunisian co-production that has been a festival favourite worldwide. This sumptuous feature takes the audience on a Tunisian widow’s journey of self-discovery. Brilliantly played by Hiam Abbass, Lilia is drawn into an exotic nightclub netherworld of sensual belly dancers and male admirers while investigating a suspected liaison between her headstrong teenage daughter and a cabaret musician. Through friendship and dance, Lilia redefines her status in a complex and ambiguous society and exchanges dowdy tunics for costumes of colour and glitter.

From women of Mohamed to women of Buddha, A Cave in the Snow (2002) is an SBS Independent documentary about Tenzin Palmo, one of the first Westerners to be ordained as a Tibetan Buddhist nun. The story takes us on a pilgrimage through Tenzin Palmo’s British childhood, conversion to Buddhism and an extended period of solitary meditation in a Himalayan mountain cave. Our journey ends on the road less travelled as Tenzin Palmo establishes a nunnery dedicated to the Buddhist teachings of women. The film includes a meeting between Tenzin Palmo and the Dalai Lama where they discuss the spiritual “glass ceiling”.

Back home in Australia, Teesh and Trude (Melanie Read, 2002) depicts a day in the life of two flatmates residing in the heartland of Perth’s social underbelly. Often humorous, we endure Teesh’s “time of the month” and ex-con father, while Trude puts up with an insensitive yobbo boyfriend and has an unexpected visit from her estranged family. To top off a bad day, the toilet’s playing up. Excellent performances from Linda Cropper as Trude, Susie Porter as Teesh and Peter Phelps as Trude’s boyfriend.

As usual, the range of features and documentaries at WOW include short films from first time filmmakers, filmmaking students from AFTRS (Australian Film Television and Radio School), UTS (University of Technology, Sydney) and Murdoch University, as well as from to established talents such as actor Rachel Griffiths. Of the 180 entries received, countries represented in the program include Denmark, England, Germany, New Zealand, USA and Australia. The prize pool of over $30,000 is one of the most lucrative filmmaking prizes of any Australian festival and demonstrates WOW’s mission to encourage, promote and reward talented women filmmakers.

When questioned about the relevance of a women’s film festival in the 21st century, two-time Festival Director, Jacqui North, commented “As long as the media and industry continue to differentiate, so will we. A media piece about talented Australian filmmakers Robert Luketic, John Polson or Gregor Jordan isn’t prefaced with ‘male director’ unlike articles about their female counterparts”. She added, “While the balance of perception and industry presence still needs to be redressed, WOW and WIFT NSW will continue in their roles to assist launching the careers of women filmmakers. In the meantime, WOW remains relevant (…) And our Festival proudly supports and showcases the cinematic output of women and the range of stories they want to tell”.