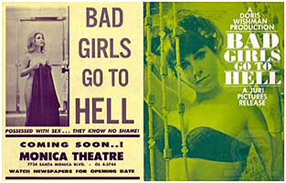 The full version of this essay was originally published in Cinesonic: The World of Sound In Film, ed. Philip Brophy (AFTRS Publishing, Sydney, Australia, 1999), and can be purchased online here.

The final image to Doris Wishman’s 1963 movie Bad Girls Go To Hell is a freeze-frame of the film’s central character Meg (Gigi Darlene). She is about to be raped. Her mouth is open in a silent scream – frozen by film technology, superimposed with the words ‘THE END’. The soundtrack contains a blood-curdling scream – well, maybe not so blood-curdling. Let’s hold the freeze-frame for a moment and discuss Meg’s voice.

Bad Girls Go To Hell is wholly post-dubbed – brutishly so, as is the case with most early ’60s American sexploitation movies. It was and remains cheaper to shoot without synch-sound in acoustically problematic locations (downtown streets and hotel rooms) and later post-synch all the dialogue. The post-dubbing process is invariably rushed, and employs amazingly emotionless and unconvincing voice-actors. Most scenes contain off-screen dialogue: easier to record, edit and mix due to not having to synchronize the Automated Dialogue Replacement (ADR) with on-screen lip movement. These factors contribute to an awkward alienation effect wherein the on-screen being achieves and projects a disembodied state. Visually, he/she inhabits a mobile screen space – within the frame, across edits – but acoustically they remain fixed, boxed in a sonic realm devoid of the subtle phasing which accompanies location microphone movement.

The result of this technological process does not instantly guarantee ‘bad acting’ as most would have it. Firstly, the ownership of the ‘act’ of acting is bipolar – distributed between the efforts of on-screen bodies and post-synced voices, each belonging to their respective persons and therefore difficult to attribute under conventional definitions of holistic acting. Secondly, finding fault in such ‘disynchronization’ belies an unfortunate trust in the unification of screen-based projections – more so due to the presumption that those who populate the screen void do so under the laws of physics which govern our worldly reality. Thirdly, any investment in screen characters on grounds of rounded, motivated and justifiable psychological traits amounts to a desperate avoidance of the emotional schizophrenia which the cinema – and drama in general – works hard to dissolve, neutralize, sanitize. The voice of Meg – detached, divorced, undynamic, ill-performed, artificially joined to her other’s lips – can perhaps rightly be accepted to be unconvincing, unacceptable, unbelievable.

But to ridicule this is severely problematic.

That scream – that corny, carney, carnivale cry – has been heard before. Too many times. Next to the sound of a gun being fired, the scream of woman is one of the most iconic sound effects in the cinema. This is not to say simply that it is ’employed’ extensively across histories, genres, forms and media (which it has been), but that its nature as a ‘sound effect’ – as a repositionable fragment within the post-production process – suggests that there are operations undisclosed by such perfunctoriness which reflect on wider commingled issues of sex, gender, violence and drama. Rather than dismiss its cheapness – its tawdry obviousness, its lack of substance – let us loop that scream from Bad Girls Go To Hell. Let us structurally, syntactically and sexually live the hell that sound effect signals. Let us voyage through the many synchronized, stretched and silenced screams which sail between the cinema and our social reality – screams whose tactile renderings are acoustically blurred, and whose significance is dulled despite the violence which prompts their release. I ask a simple question: what does it mean when a woman screams?

In Bad Girls Go To Hell, a circular story unfolds. Meg – an oversexed bored housewife, the type of which rampantly populates sexploitation movies of the ’60s – cleans the house in her negligee while her husband goes to work. After taking out the garbage – in her negligee – and arousing her lecherous landlord, she is raped. While she is being ravaged by her landlord, she awakens from her dream. She then gets up, cleans the house in her negligee, takes out the garbage in her negligee – and is attacked by her lecherous landlord. Scream – freeze frame – the end. The circularity of this story is more important than its originality. To use a classical and clichéd paradigm, the story’s ‘journey’ – as is the case with pornography in general – is more a bodily passage which mimics sexual dynamics (sensation, arousal, orgasm) than it is a three act tale. Pornographic narratives – both those that show and those that suggest – are best understood as linear looping progressions impelled by a moistening of canals and an engorging of tunnels. We move through their telling less via an understanding of character and plot and more through a realization of our own physical transformation. Under such a logic of interpretative morphology, visuals and sounds combine solely to titillate and satiate. And where required, sound can stand in for the unseeable and image can be sublimated by sound.

It is not hard, then, to perceive the cinematic scream as an ‘ero-sonic’ moment. It signifies an entry point for erotic consumption in the name of rape. Like the bird that tweets morning, the siren that signals work, the bell that tolls death, the angel that sings rest, the scream in the cinema operates as a phoneme for that which cannot or does not want to be shown. Clearly, the screen would like to grant us an image of graphic vaginal penetration under force. Heterosexual pornography performs this service, but the desire for its effect is by no means restricted to pornographic production and consumption – hence its refuge under complex symbolic guises in supposedly ‘soft’ cinema. Many people afraid of (or even opposed to) pornographic presence may nonetheless desire such imagery. Denial of that unacknowledged desire coupled with the social coding of dubious yet acceptable imagery cause a crisis in consumption for the cinema: how can it deliver that which guarantees its economic livelihood but which would also constrict and potentially destroy its social status? By the invisibility of sound – the realm wherein the unseeable becomes known and the unwatchable becomes imagined.

Accordingly, the female scream has remained a frighteningly ambiguous fixture in the dramatic scenarios of theatre, radio and cinema – especially as its placement in a dramatic context reverberates with the sublimatory pornographic coding of sexploitation. From the salacious silence of open-mouthed heroines tied to railway tracks, to the radiophonic incision of female fright into the family loungeroom, to the gasping gurgling foley effects of nurses and co-eds having their throats slashed, one detects a dark colon of vocal anguish shooting through the historical reservoir of ‘thriller-kill-her’ entertainment. It is no wonder that a mangrove of murky knotting between the dramatic and pornographic has given rise to skewed perspectives, where dramatic issues are sexualized and erotic functions treated as dramaturgy: did she deserve it? Did she want it? We told her not to visit the sawmill, walk home from work, go down to the basement. Yes, she’s in her underwear because she wanted to shower. No, he wanted to kill her because he hated blondes only. The ambiguity of the scream is most frightening because it becomes embroiled in the most inconclusive morals and mores. The scream rings loud as if to give a warning, a message, a statement – but all it does is thrill us, raising the hair on the back of our necks and stimulating the pubic forest of our confused desires.

Yet the starkest aspect of the female scream’s ambiguousness is how its very intent to communicate – through the tightening of the vocal chords in an involuntary spasm – short circuits all linguistic operation. The wordless cry is a return to the primal, sure enough, but its desperation alone does not ensure clarity of purpose. Many a scream heard from a distance halts one with its indistinction between delight, terror, fancy, pain. ‘No’ might mean ‘no’, but a scream can be interpreted through too wide an emotional gamut to be fixed as a directive. Worse, the scream heard from a distance – refracted and diffused by urban architecture – leaves one in a quandary as to the unseen circumstance and context of the disembodied voice: are two girls teasing each other? Are lovers deep in breeder passion? Is a group of friends making their way home from a bar? Or is someone being attacked? Cinema gleefully and remorselessly exploits the iconic effect of the scream, emptying it of its social specificity and flooding it with our indecision and immobility. How easy it is to make a plot turn through an off-screen scream. How dreadful it has become a cliché which filters our aural reception of what might be happening right next door. How dumb it is to ignore its lineage.