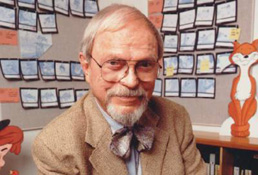 Chuck Jones was the last of the great studio animators who transformed early animation into what we now know as the classic period or Golden Age of film cartooning. Fortunately for all of us, he is survived by his works. The obituaries have reminded us of his central role at Warner Brothers, both inventing characters (the Road Runner, Pepe Le Pew, Claude Cat, Marvin the Martian) and making the commonly owned characters uniquely his own, particularly Bugs, Daffy and Elmer. And some have pointed to his more personal, one-off films—Duck Amuck (1953), One Froggy Evening (1955), The Dover Boys (1942).

What they have not been able to say is that Jones was generous, cheerful, funny, informative and a pleasure to be with; his charm was such that most women fell in love with him on the spot. He was also a fierce champion of the technique, the art, and the value of classical 2-D full animation. I met him in 1972 when Greg Ford and I interviewed him for a special animation issue of Film Comment (January-February, 1975). It was a long and quite detailed discussion; what he said there remains the best introduction to the craft of animation I have encountered. An excellent teacher and explainer with an apt and endless supply of clarifying examples. Indeed, over the past three decades, he became a celebrity, a public figure partly as himself and partly the personification of Warner Brothers cartoons.

Jones was aided in this regard by television. From the ’50s on, tranches (1) of Warner Bros cartoons were syndicated to television—first black-and-white, then colour—as children’s programming fodder. That this has remained true for six decades has provided a cross-generational cultural currency of remarkable durability (in fact, if it had not been for this, we probably would not be talking about Jones today). The Bugs Bunny Show (1960), he would remind us, was the first animated cartoon show in US television primetime. When, at the height of his powers in 1963, Warners closed its cartoon shop, Jones went briefly to MGM, then set up shop as an independent producer of animation, completing some features, Gay Purr-ee (story only) (1962) and The Phantom Tollbooth (1969) but mainly supplying television specials such as How the Grinch Stole Christmas (1966), Horton Hears a Who (1970), The Pogo Special Birthday Special (1969), and Riki-Tiki-Tavy (1975). Through the ’80s and ’90s he kept his finger in projects too numerous to mention as well as lectures, public appearances, and the odd cameo (Gremlins [Joe Dante, 1984], Innerspace [Joe Dante, 1987]).

Jones’s early work at Warners was very Walt Disney (he started out as an animator’s assistant with Ub Iwerks studio, which had a complicated on-and-off relationship with the early Disney studio)—accomplished, but not to the taste of everyone in the Warners crew. In 1942, he struck out in very different directions, experimenting with stylization of animation, line, backgrounds, colours, patterns; The Dover Boys is the breakthrough film. His work in this period paves the way for the much more celebrated work done by all the animators at UPA (United Productions of America). Think Gerald McBoing Boing and the Mr. Magoo series a decade later. Animation in the Warners context was a collaborative or team activity. Unlike Disney, where there was only one team and its goal was to provide a single Disney style, at Warners there were three or four units producing their own cartoons and developing their own very different styles. A Jones cartoon always looks like a Jones cartoon; how much of this is down to Jones and how much to the remarkably skilled and like-minded team he assembled and guided is hard to say. But Jones was thought of at Warners as their thinker, their intellectual. Jones eschewed the anarchy and wackiness that was Tex Avery’s heritage, and the manic, frantic energy of Bob Clampett. Jones’s work has been described as “syllogistic”, developing a single premise into a rich series of repetitions and variations (The Road Runner [1949 –1964] is the extreme example).

His work is far more involved with words and language than any other at Warners (or anywhere else at the time). Bugs, Daffy and Pepe particularly, and any number of minor characters run riffs, games and flourishes with words which are completely sui generis; what other animator gives so much pleasure when only listened to without watching? What scripts. His two memoirs, Chuck Amuck (1989) and Chuck Reducks (1996), are further evidence of this way with words, anecdotes, and phrasing. (well-illustrated too, of course).

It is invidious, I suppose, to claim that Jones was the greatest of all character animators, but I can’t think of any to better him. An acute observer, he constantly hit the precise line, curve, gesture to deliver character complexity and/or precision in a single, untrumpeted coup, often involving silence, underplaying, a pause, a slight, tiny shift in an eyebrow, a finger, the direction of a gaze. He was—deservedly—proud of how well observed his renditions of various animals’ behaviour were. This meticulous approach extended to figuring out exactly how long it took—from the time the Coyote fell off the cliff until the moment when a tiny puff of dust appeared down at the bottom of the cliff—to get the biggest laugh. (The answer: 13 frames).

Jones did outstanding work throughout his career, but for me his work in the ’50s is especially important. In the way Bob Clampett’s ’40s work is particularly expressive of that period, just as The Simpsons expresses the ’90s so well, Jones epitomizes the comic ethos of the1950s. Key figures in this era—some more remembered now, some less—include Bob Elliott and Ray Goulding (radio comedy duo who got their laughs from almost nothing), Roger Price (creator and performer of Droodles), Walt Kelly (Pogo), and Stan Freberg (an occasional Jones collaborator as cartoon voice artist). In what it is easy—and lazy and incomplete—to think of as the Disney-Eisenhower decade, these creators staked out a completely different comic territory, and at their epicenter was Chuck Jones. Among his many remarkable accomplishments, this remains for me the most remarkable.