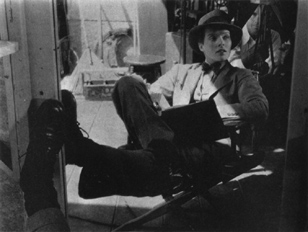 “Jimmy Monkley, that’s me. Little friend to all the world. Nobody’s enemy but me own.”

In 1935, for their third collaboration together after the successes of A Bill of Divorcement (1932) and Little Women (1933), director George Cukor and actress Katharine Hepburn received RKO’s approval to film a decidedly different, downright outré property, based on a novel by Compton Mackenzie. The storyline has been described by Gavin Lambert, in his volume of interviews, On Cukor, as “a simple, mildly eccentric tale of a girl who disguises herself as a boy to help out her dear old father, who’s a thief and a con man, and both men and women fall in love with him/her.” (1)

When Lambert expresses “wonder” regarding “why there was such a terrible controversy over something very charming and very lightweight,” he’s possibly overlooking the film’s almost schizoid shifts between that ethereal surface charm and some other darker, heavier, disturbing undercurrents. (2) Indeed, what haunts this sunny, picaresque romance, and its often delectable dalliances in gender-identity, is the spectre of a gritty, disconcertingly cynical psychodrama.

For a start, the heroine-hero’s “dear old father,” Henry, portrayed with jittery susceptibility by Edmund Gwenn, isn’t exactly a heart-warming, protective parent. He’s more like a passively amoral neurotic, whose initially amusing dimness of mind and dependency-on-others gets distressingly out-of-control. Henry’s tearful delusion concerning a rat that simply isn’t there is especially fateful and chilling.

But the outstanding omission in Lambert’s cross-dressing-daughter-and-her-darling-dad scenario is any mention of Cary Grant’s Jimmy, the attractively unprincipled, Cockney scoundrel, who encounters them on the Channel Ferry, promptly betrays the old codger’s trust, and when he’s found out, seduces both father and apparent son into joining forces with him in a series of hoaxes and scams. Hitherto a handsome hunk playing tuxedoed toy boys over at Paramount, Grant, on loan-out to RKO, discovered and relished in Jimmy what Cukor saw as “the ground under his feet.” (3)

Jimmy, a self-interested pragmatist, sees humanity as basically consisting of “awks and sparrers,” and although he denies he’s in either category, his actions make it clear that he’s aligned to the former (predatory) group. The character – who is reputed to have been the basis for Orson Welles’ meta-villain, Harry Lime, in Carol Reed’s 1949 classic The Third Man (4) – is Cary Grant, the actor’s, first proper opportunity to incorporate into his screen persona his own roots as Archie Leach, an East End circus performer, someone forced to survive on his wits, exploiting a street-savvy gift of the gab, as well as the travelling player’s capacity to project loudly and constantly improvise. As Pauline Kael has observed, “his con man is so loose and virile that he has more life than anything else in the picture.” (5) From Sylvia Scarlett onwards, something of the unleashed, hyperactive, hyper-masculine cad would continue to inspirit and energise the onscreen presence that defines Cary Grant-ness.

Which is not to deny how the film takes Katharine Hepburn’s star-image to levels never touched before or since. When narrative circumstances compel Hepburn’s Sylvia to clip her braided plaits and transform into Sylvester, the film’s diegetic arena becomes, for more than half the plot’s duration, a tantalizing field for all kinds of ambiguous play. By the time Sylvia-as-Sylvester is touring the English coastal regions alongside her father, Jimmy, and one of the latter’s former flames, Dennie Moore’s flightily flirtatious Maudie, all of them participating in a show called “The Pink Pierrots,” the stage is set for suggestive overtures. One moment Maudie wants to paint a Ronald Colman-ish moustache on Sylvester’s “smooth as a girl’s” face and kiss it. And next, Jimmy, taking off his shirt to bed down for the night, comments on the nippy weather and proposes to Sylvester, “you’ll make a proper little hot water bottle.” Meanwhile, a Bohemian artist, Michael Fane (Brian Aherne), who has befriended the young lad, is eager to discover “what it is that gives me a queer feeling when I look at you.” These advances signal the potentiality for Hepburn’s peculiar coltishness to triumphantly transcend conventional gender boundaries, to go where Louisa May Alcott’s Jo and Booth Tarkington’s Alice Adams might finally fear to tread. But these deliciously cheeky invitations are met with sexual panic and a predictable retreat into befrocked femininity, as well as the girlish pursuit of Aherne’s fairly sappy, foppishly neuter Michael, in preference to Grant’s ethically unsound, grubbily charismatic Jimmy.

In a sense, the film also runs away from fusing the pastoral pantomime of quite daring sex farce with a more closured, noir-ish tragedy, the overall tone further muddied by the introduction of Natalie Paley’s Lily, a rather stilted, Slavic siren, infatuated (again incredibly!) with Michael. And it’s an act of desperation on the part of Lily the mischievous spoiler, that results in a philosophical showdown between Sylvia, the effusively idealistic androgyne and Jimmy, the phallically earthy rogue – an interchange wherein she sternly accuses him of having the mind of a pig, to which he replies, with Beckettian bleakness, “It’s a pig’s world.” Eventually the binary oppositions of classical narrative separate Sylvia Scarlett’s two dynamic forces, Grant and Hepburn, who, by the laws of magnetic connection, should end up together, rather than apart, a misjudgement to be corrected in the next three films which so electrically paired them: Howard Hawks’ Bringing Up Baby (1938), George Cukor’s Holiday (1938) and The Philadelphia Story (1940).