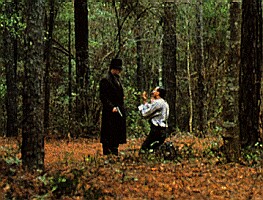 Dashiell Hammett’s prose is generally accepted as being highly conducive to cinematic rendering, it is richly descriptive of setting and circumstance and the perspective is almost always that of an objective observer – a surrogate for the film viewer. The Glass Key and Miller’s Crossing represent two distinctive interpretations of Hammett’s literature. The former is a direct translation of Hammett’s novel of the same name; the latter adapts elements from Red Harvest and then sets these ambient factors adrift in a narrative which echoes Hammett’s The Glass Key but also digresses readily into original material. Yet, despite Heisler’s film being more rigorously dependent on Hammett and more faithful in its reproduction of narrative events and characters, arguably it is Miller’s Crossing which most successfully recreates the core and quintessence of Hammett’s literature.

Hammett’s narratives are often set in unnamed or fabricated cities. Red Harvest is set in the fictional metropolis of Personville; known colloquially by the town’s inhabitants as Poisonville in view of the rampant corruption which has infected the community. Ethan Coen stated that the town of Miller’s Crossing was “typical of the ‘corrupted town’ of Hammett’s novels”. (1) In the Coens’ film the narrative is wrapt extraordinarily tightly around Tom Reagan’s (Gabriel Byrne) attempts to incite a gang war which will eventually consolidate and entrench his boss Leo O’Bannion’s (Albert Finney) ‘political’ (2) authority. Tom achieves this goal through a series of seemingly contrary actions which pit faction against faction, his contrivances eventually destroying the fabric of Leo’s opponent’s regime. The concept of setting criminal against criminal and using their mutual suspicion as a means to destruction is drawn from Red Harvest in which the Continental Op uses the established distrust existing in Personville to eradicate the uncontrolled corruption. Joel Coen maintains that this idea of intentionally creating confusion was a crucial structuring technique on which Miller’s Crossing was assembled: “this is an old Hammett idea – ‘If I stir things up, I’ll be able to deal with the consequences, whatever they are. Something will emerge that I can exploit’.” (3) The Op in Red Harvest contends: “Plans are all right sometimes…And sometimes just stirring things up is all right – if you’re tough enough to survive, and keep your eyes open so you’ll see what you want when it comes to the top.” (4) In Miller’s Crossing Tom winds up the antagonisms in the town to breaking point, his delicate games of deceit seem almost ready to crumble under the massive intensity that they provoke. 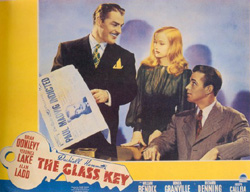 Heisler’s The Glass Key is a more direct adaptation of a single Hammett novel – The Glass Key. From this novel Heisler draws the narrative events and many of the characters. As is the case in the novel the story centres on political chicanery and strategy and a murder which operates to unbalance a delicate environment of doubt and mistrust. Yet, like Miller’s Crossing, the adaptation is not so straightforward, other factors come into play to influence the material. An important component of Heisler’s The Glass Key is the casting of Alan Ladd who plays the hero Ed (Ned, in the novel) Beaumont. Heisler’s film was made in 1942, the same year in which Ladd’s star rose with the release of This Gun for Hire (Frank Tuttle, 1942) in which he played the fated assassin Raven. He was also teamed in that film with Veronica Lake who plays Janet Henry in The Glass Key. These influences compel the nature of this adaptation and obscure some of its direct relations to the source novel. Alan Ladd’s Ed is somewhat of a compromise in comparison to Hammett’s Ned; not as cynical or as cruel, he is a lightweight version of the author’s hero.

Dashiell Hammett wrote about powerful, yet taciturn men, who exhibit a rigid and disciplined approach to principle and who rarely display emotion or weakness. Of Hammett’s typical protagonists Edward Margolies writes “his tough heroes…were cynical, unswervingly devoted to their jobs, amoral, courageous, and seemingly impervious to emotions.” (5) Ladd’s Ed recreates some of these attributes with his physical expression; he is stiff and rigid, he restrains his movements so as to appear calm and controlled. He only punches one character (although like Tom in Miller’s Crossing he is repeatedly punched himself), though it is merely a tactical action rather than a display of bravado. The only genuine violence that Ed utilises is a predictably terse and concise response to the provocation of Taylor Henry (Richard Denning), kicking the Senator’s son sharply in the shins. The physical toughness and unyielding disposition of this character is somewhat undermined by Ladd’s concessions in casting Ed as amiable and pleasant. His recovery from a savage beating in Heisler’s film becomes an episode where he, Philip Marlowe-like, teases and chases nurses. The influence of Ladd’s persona, a burgeoning matinee idol and star, seems to have filtered into the characterisation of Ed and transmogrified the Hammett hero into something akin to a Hollywood compromise.

Joel and Ethan Coen’s film, too, is influenced as much by the casting of Gabriel Byrne as any specific reference to Hammett’s heroes. The Continental Op of Red Harvest is middle-aged, overweight and short. The casting of Byrne allows for the psychological assurance, self-confidence and icy demeanour to be physically reproduced in the sturdy and unruffled presence of the tall and lean actor. Tom is ‘a man who walks behind a man, whispers in his ear’, he is the brains behind Leo’s operation, and he is the heartless centre of Miller’s Crossing. Hearts and minds vie for attention in the Coens’ film. Tom contemplates the importance of reason in his decisions, he uses an analytical approach to support a basis for all of his actions. On several occasions Tom is framed alone in his room, pensively smoking a cigarette, the consternation on his face signifying a man lost in the realm of his own thoughts. The central enigma of Miller’s Crossing is Tom’s agenda, Verna (Marcia Gay Harden) suggests it is to woo and win her, Leo implies that Tom is motivated by loyalty, but Tom remains implacably obscure about his strategies and their intentions. Arguably, Miller’s Crossing is precisely about Leo’s revelation to Tom of his intentions to marry Verna, for it is this incident which precedes and then instigates the events which follow; events which culminate with a bonding so substantial between Leo and Tom that it must eventually become untenable.

With Ed and Paul (Brian Donlevy), Heisler’s film recreates the strong bond between Ned and Paul from Hammett’s novel. Like Tom and Leo they each possess what the other lacks. Donlevy portrays Paul as good-natured rogue filled with audacity and charm, despite his actually being a rather corrupt politician. Yet, he is none too bright and it is the role of reason and intellect that Ed fills; at one point Paul nominates Ed as ‘Big Brain’ (initially Miller’s Crossing‘s title was ‘The Big Head’). Ed is the man behind the man, his input is crucial for Paul to maintain elected office. Paul, despite his nefarious activities, has the heart to match Ed’s intellect. Their co-dependence is premised on the notion that only together do they embody a complete being, exhibiting both emotion and reason. Paul’s physicality is a key to his character, he dresses flamboyantly, he shadows boxes and throws insurgents through glass windows. Like Leo, who ‘can trade body blows with anyone’, Paul’s power is all corporeal, all evident to the eye, and again like Leo, he doesn’t like to think. Taylor Henry’s sister Janet is the wedge that comes between Ed and Paul, in effect negotiating and nullifying the homosexual subtext evident in Hammett’s original novel. In Heisler’s film Janet becomes the trophy for which Ed and Paul battle, and their relationship endures despite this contest. At the conclusion of Hammett’s novel Ned effectively steals Janet away from his boss, the relationship between Ned and Paul remains unresolved and there are persistent resentments and jealousies. Yet, Heisler’s film ends with Ed and Janet uniting under the blessings of Paul who cheerfully recognises that the two are clearly in love with each other. Much of the cynical edge, ethical dilemma and sexual ambiguity of Hammett’s source novel is eroded in this final scene.

Despite this compromise, Heisler’s The Glass Key manages to convey some of the homoerotic subtext in Hammett’s story of male loyalty, companionship, violence and treachery. Walter Bendix’s brilliant interpretation of Jeff, the chief villain’s psychopathic henchman, draws heavily from the character created by Hammett in his novel (the character finds an equivalent in Miller’s Crossing as Eddie ‘The Dane’ Dane). Bendix’s performance as a self-loathing sadistic drunk is consummate, he pledges his delight in beating ‘little’ guys like Ed (who he calls ‘rubberball’) around in small rooms, and his malevolent stare betrays a psychotic mind. The explicit and implicit violence in The Glass Key seems relatively excessive for a production code era film. Bendix’s gently effeminate voice, kindly round face and immature mentality conflicts sharply with his powerful body, nervous energy and malicious gaze. The delight Jeff takes in beating Ed goes beyond mere psychopathic and implies deeper sado-masochistic desires, hinting at some of the themes of moral, sexual and ethical ambivalence that characterises Hammett’s literature.

Ultimately, through the deep haze of corruption present in Hammett’s novels—the intrinsic nature of contamination in the town of Personville (‘Poisonville’) in Red Harvest or the affliction of venality in the respected sector of society in The Glass Key—justice is always met in a conventional sense. In the former the corruptive forces in Personville self-destruct under the guidance of the Con Op, and in The Glass Key the Senator is exposed as the murderer of his son. The heroes in both cases—the Op in Red Harvest and Ned Beaumont in The Glass Key—while hardly uncontaminated, are for the most part worthy and moral characters. Tom, in Miller’s Crossing, like his Hammett counterparts, corrects the disturbing situations which develop and returns the town to the status quo. Yet, in achieving this situation Tom is culpable of murdering a man in cold blood, killing Bernie (John Turturro) with a gunshot to the head. In Miller’s Crossing the justice is executed with more cynicism and amorality than anything witnessed in Hammett. Caspar (Jon Polito) is preoccupied by issues of ethics throughout the film, endlessly speculating on the nature of decisions and the consequences of disobeying strict ethical principles. But in Miller’s Crossing there exists no strict ethical foundation, or moral grounding, only a blind loyalty Tom has for Leo which, it seems, the Coens are anxious to quietly celebrate.

Despite it being the more faithful adaptation, The Glass Key is informed by elements outside of Hammett’s immediate literature. This Gun For Hire, the pairing of Alan Ladd and Veronica Lake, Hollywood’s production code and the burgeoning era of film noir have all played a part in the nature of Heisler’s rendering of Hammett’s novel. Miller’s Crossing also draws upon several sources in addition to Hammett in its construction; amongst them Warner Brothers gangster pictures of the 1930s, the seminal modern gangster film The Godfather (Francis Ford Coppola, 1972) and the Italian art-film Il Conformista (Bernardo Bertolucci, 1970). At play in both Miller’s Crossing and The Glass Key, therefore, are several competing and intertwining sources which pull and push the texts in different directions, exploring, commenting and interpreting the primary sources from which they draw. It is perhaps to the Coens great credit that even though they venture further away from their inspiration, their film nevertheless represents a more complete and successful interpretation of Dashiell Hammett and his literature.