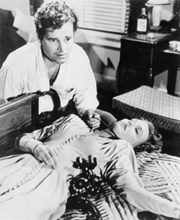 Detour is commonly thought of as an example of film noir. But to the extent that we romanticize noir as a genre of exceptional people in exceptional settings and circumstances – for example, the heroic gumshoe and the seductive femme fatale circulating through fascinating locales like swanky nightclubs and overblown apartments or mansions – Detour can only appear decidedly unglamorous, not really open to romantic fantasy. Outside a few scenes, the film doesn’t even look like classic noir. Except for obviously hokey moments such as the one in which a bright light picks out Al Roberts’ eyes from the inky shadows as he begins to tell his tale of personal doom, Detour even avoids the exotic plays of light and dark that typify noir and instead, for much of its narrative, the film opts instead for a washed out look – for example, the harsh brightness of the California sun, the dreariness of the used car lot, and the nondescript blandness of the hotel room in which Al and Vera play out their duet of doom.

It is perhaps most productive to think of Detour within a very particular subset of noir that film historians Noël Burch and Thom Anderson refer to as “film gris” (gray film). (1) The films gris reject noir glamor and wallow instead in an unremitting bleakness. Where romantic film noir pictures a world of larger-than-life figures, the films gris deal with all-too-average losers, everyday American citizens who are caught in the rat race of dead-end career options and desperately try to beat the system by means that are as meager as their dreams. In Detour, it is important that Al Roberts’s journey propels him westward toward Los Angeles and the radiant blondeness of his girlfriend Sue. In a parody of the foundational American myth of the pioneer quest, Al’s ‘Mecca’ turns out to be a hopeless site of broken dreams, lost illusions. We learn, for instance, that even Sue, who has preceded Al and about whom he was sure that success was just around the corner, has become nothing more than a hash-slinger in a commonplace diner.

As a film gris, Detour immerses us painfully in the world of ordinary characters trapped by the very nature of their human condition. In the most common interpretations of the film, this condition is existential insofar as the film appears primarily to depict people as the inevitable victims of a contagious fatalism that by nature they can never outrun. (2) But it is also possible to read the depiction of the human condition in Detour as sociological in its emphasis on irreconcilable differences between the haves and the have-nots in the very definable context of 1940s America. For instance, the film harps unremittingly on the centrally determinant role of money in people’s lives: what you can accomplish when you possess it, how much is closed off to you when you don’t. (3)

Detour‘s tone of sparseness and bleakness no doubt finds much of its origins in the conditions of B-movie production. Shot in less than a week with a minimal number of decors and with actors about whose performance we are never sure if they are great or awful (or the two together), Detour offers a pared down narrative and visual ‘style’ (to the extent we can call it that) that echoes the constricted field of options in which its characters move about. Immersing itself in a minimalism that is intense and claustrophobic, Detour can ultimately seem not that removed from the despairing existential effort of a Jean-Paul Sartre in Huis clos (aptly translated as “No exit”): certainly, the long sequence in which a desperate Al and an ever more shrill Vera spar bitterly in a hotel room distinguished only by its barrenness seems an apt visualization of Sartre’s dictum that “Hell is other people.”

Detour is a tawdry, even aesthetically and morally ugly work. But in this lies its fascination (and perhaps charm) for film scholars and cinephiles. Here, for the fans of a cinema at the margins, it is a typical gesture to insist on Detour as the work of an auteur and find the film redeemed by the insistence of an artist’s world-view. Intriguingly, Ulmer himself claims to have preferred the B-movie mode of production to big-budget Hollywood gloss: he presents himself as someone so committed to his personal vision that only the relative freedom of the B-movie (where one could often cinematically do what one wanted as long as budgets were adhered to) could provide the space for him to speak his mind without corporate interference. (4) Relentlessly refusing the refreshing diversions of typical narrative cinema, Ulmer becomes a sort of guerrilla filmmaker and Detour becomes a philosophical lament admired for its obstinate avoidance of complacency, affirmation, and seductive visual and narrative pleasure.