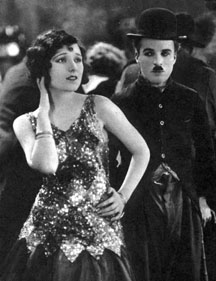 A little man, known simply as The Lone Prospector, has invited a girl named Georgia and a few of her friends who work in the local saloon to a New Year’s Eve party in his cabin. He is ‘cabin-sitting’ for the cabin’s owner, who has left town to do business elsewhere. It is Klondike, Alaska, at the time of the gold rush. The little man – the poorest of the poor, but adventurous, always hopeful – has come to the Klondike, along with thousands of others, to try his luck. He has raised a little money shoveling snow from local storefronts, just enough for a roast chicken and trifles for the girls. He has carefully decorated the cabin and set a small table for the party.

It is still very early, so the little man sits down at the table and irresistibly falls asleep. He dreams that his party is in full swing. They are all there, Georgia and her friends, and he is delighting them with little gifts and jokes. As a finale, he takes two forks, jabs them into dinner rolls, and performs an impromptu dance – the lighting and framing creating the wondrous illusion of the rolls becoming his tiny feet on the table, doing ballet moves, soft-shoe and sideshow dances. The girls cheer the little man when he is done and he pretends to swoon… only to awake at the same table, unoccupied, alone in his cabin. It is nearing midnight and his guests have forgotten his party.

Hearing noises of revelry from the town, the little man, his aloneness complete, walks the short distance from his cabin, halts outside the brightly lit windows of the saloon and gazes within just as the crowd of townspeople – mountain men, miners and bar girls – all join hands at the stroke of midnight, maudlinly singing “Auld Lang Syne.” When the song is done, shots are fired into the air, and the celebration is renewed. The little man turns toward us, casts a shatteringly sad look at the frozen night and then wanders off.

The scene, the little man’s dream and sad awakening, is the centerpiece of Chaplin’s The Gold Rush and evokes, in only a few short minutes, the breadth of his genius – the inimitable quality of laughter in the face of pain, the whole bittersweet invention of how and why this peerless film artist could have made a pathetic tramp into a figure of fun. Chaplin admitted in his autobiography (which he titled, with – for once – unintentional humor, My Autobiography) that no matter how famous or prosperous he had become, he could never forget the poverty, the want and the humiliation, of his childhood.

At first impish, often violent in the knockabout style of his Mack Sennett two-reelers, Chaplin’s Little Tramp matured as he gradually acquired total control over his work. Once he had fulfilled the terms of his contract with First National, he was free to explore the character more deeply, giving him a romantic, even tragic, side. Until, in the final scene from City Lights (1931), the comic mask is shockingly lowered: Chaplin becomes an actual tramp – broken and shambling, but still oddly (beautifully) capable of dignity. But The Gold Rush presents us with this unique mixture of heartbreaking comedy in its most perfect balance.

The shoot became legendary, with Chaplin taking full cast and crew by train to Truckee, California in the Sierra Nevada mountains (where one of the first inspirations for the film – the ‘Donner Party’ episode – took place) with the intention of filming entirely on location. His young wife, Lita Grey, was cast as his leading lady and the shoot went smoothly (except for Chaplin’s usual long pauses for inspiration) until Grey became visibly pregnant. Chaplin removed her from the picture and cast one of Grey’s friends, Georgia Hale, in the part. He then took everyone back to Los Angeles to re-take most of the scenes on back-lot sets. Very little of Chaplin’s location shooting remains in the finished film.

In 1942, Chaplin re-released the film with all the title cards removed and music, sound effects and narration (all by Chaplin, of course) added. Chaplin did this in order to regain copyright of The Gold Rush, which had fallen to the public domain, for his own production company. When it was released, in the middle of World War II, audiences and critics were delighted, most of them agreeing that Chaplin had improved his masterpiece.

But there are subtle differences in the re-release version. Chaplin often used two cameras during shooting, and some of the scenes are framed differently, suggesting he used some of the footage from the second camera. And one significant cut takes place at the very end of the film. In the original cut, The Lone Prospector (Charlie) and Georgia are having their picture taken by some reporters and Charlie gives Georgia a prolonged kiss. In the re-release the scene is gone, the film ending with Charlie and Georgia simply disappearing up some stairs, with Chaplin comically alluding in his narration to their future together. Perhaps Chaplin felt that the kiss was a too-happy ending for the Tramp.

Since the appearance of the re-release version, a preference for the original has developed among Chaplin purists. Many still find Chaplin’s narration, though often discreet, to be too unsubtle for the film, sometimes belittling the action. For instance, Chaplin playfully mocks the (obviously intentional) overacting of Mack Swain – which is unnecessary editorializing. It was as if Chaplin were making excuses for a new audience unaccustomed to silent film.

But the original film, untampered with and unimproved, still resonates with audiences whenever or wherever it is shown. Chaplin’s Little Tramp was so entirely a creature of the silent film that he never allowed him to speak – except the gibberish song he sings in Modern Times (1936). Chaplin is one of the very few film artists who, having made silence his métier, so prolonged the life of silent film that its persistence was guaranteed by his genius. The silent film lives through Chaplin.