The renovations made to the staffing and programming of this year’s Bangkok Film Festival, which ran from November 16-25, gave an extra charge to the current excitement surrounding Thailand’s revitalized film industry. Pimpaka Towira succeeded founding director Brian Bennett as Festival programmer this year, while the Festival dates were moved back to coincide with the major industry tradeshow Cine-Asia 2001, taking place December 4-6. Thailand is the latest Asian nation to enjoy international acclaim for its adventurous cinematic exports, from lush historical epic Suriyothai (Chatrichalerm Yukoi, 2001) to gender-bending volleyball documentary Iron Ladies (Youngyut Tongkongtoon, 2001) to avant-garde accomplishment Mysterious Object at Noon (Apichatpong Weerasethakul, 2001), which enjoyed a run at New York’s Anthology Film Archives in November. Serving up over 90 films from over 20 countries, the Festival’s centerpiece was definitely its New Thai Cinema category of domestic films released in 2001.

The Festival got off to a disappointing start with an announcement that expected Hong Kong guests, Wong Kar-wai and Tony Leung Chiu-wai, director and star of opening night film In the Mood for Love (2000), would be unable to attend. The Thai and expatriate cinephiles in attendance seemed unbothered, grateful enough just to be seeing something besides the Hollywood blockbuster currently reigning at the shopping mall multiplexes in this cinema-lite city. Like Wong’s film, many Festival entries were imports from more film-savvy nations offering up some of the best of the 2000-2001: from Sweden, Lukas Moodyson’s Together (2001); Iranian features, The Day I Became a Woman (Marzieh Meshkini, 2000) and Smell of Camphor, Fragrance of Jasmine (Bahman Farmanara, 2000); François Ozon’s Under the Sand (2000); Lars von Trier’s Dancer in the Dark (2000); and the Coen Brothers’ recent revisionist noir, The Man Who Wasn’t There (Joel Coen, 2001). Notable filmmakers in attendance included Kiyoshi Kurosawa, whose screenplay for Charisma (1999) was an award-winner at last year’s Festival; Argentian director Ariel Rotter with his recent Buenos Aires-set comedy Just for Today (2000); and renowned French director Jean-Jacques Beineix (Diva [1981]), who re-surfaced after an eight-year hiatus with his new psychological thriller Mortal Transfer (2001). 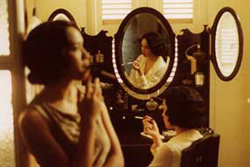 One of the most warmly welcomed Festival guests was Thai filmmaker Nonzee Nimibutr, whose 1997 gangster flick Daeng Birley & Young Gangsters is one of Thailand’s most successful films. Nimibutr brought with him the director’s cut of his controversial recent work, Jan Dara (2001), which received much advanced publicity when state censors reportedly ordered significant cuts be made before its theatrical release earlier this year. In the girlie bars of Bangkok’s Patpong district, only a short jaunt from the Festival venues, sex is as readily for sale as the gold chains and fashion knock-offs hawked by street vendors. But Thai culture paradoxically considers expressions of intimacy taboo. It is commendable that Nimibutr got his film made at all, let alone shown in its entirety at the Festival screening. Unfortunately, the result is disappointing. An over-earnest memoir of a bastard son growing up in a household so highly incestuous it defies believability, Jan Dara‘s unimaginatively tawdry sex scenes are staged for provocation but quickly become as tiresome and off-putting as the entertainments offered up in Patpong. Add to this a hackneyed narrative, characters polarized as either saints or villains, and overly lush photography that, while stunning, too closely resembles a travelogue on Thailand.

Taiwanese filmmaker Tsai Ming-Liang was selected Best Director for What Time is it There? (2001), his lighthearted tale of a romance between a Taipei street vendor and a young woman on her way to Paris. From Turkey, Nuri Bilge Ceylan took the Best Screenplay Award for Clouds of May (1999), while the DTAC People’s Choice Award went to Kurosawa’s new techno-thriller Pulse (2001). A Special Jury Prize was awarded to the Sri Lankian feature This is My Moon (Asoka Handagama, 2001). Chinese director Zhang Yang’s follow-up to his highly regarded 1999 feature Shower, the complex family drama Quitting (2001) received the Festival’s top honor for Best Feature Film. Perhaps the first mockumentary not to be played for laughs, Quitting is a demanding, unflinching portrait of a former child actor (Jia Hongsheng, playing himself, first gained fame as the teenaged lead in the director’s acclaimed early-’90s stage version of Kiss of the Spider Woman) struggling to kick heroin addiction and overcome an emotional breakdown. 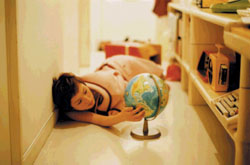 Other Festival highpoints included Tony Rayns’ directorial debut The Jang Sun Woo Variations (2001), a documentary focused on the controversial Korean activist-turned-director of such films as A Petal (1998). London-based Sight & Sound critic Rayns was also on hand to speak about the current climate and direction of the Thai film industry at a Meet the Critic panel with Thai directors Youngyut Tongkongtoon (Iron Ladies) and Nonzee Nimibutr (Jan Dara). Also garnering support in the Asian Cinema category was Japanese feature Body Drop Asphalt (Junko Wada, 2000), a Tokyo tale of a Bridget Jones-esque writer who sees her semi-autobiography become an overnight literary sensation. The Festival finished off with another world premiere of a Thai production, One Take Only (Oxide Pang, 2001), starring Pavarit Mongkolpisit of Bangkok Dangerous fame and produced by Film Bangkok.

Generational differences and the conflict between old ways and new ways was a narrative theme of the Festival selections. With Western influences present in many films, from Jean-Pierre Léaud’s cameo in What Time is it There? to Quitting‘s main character emulating Travis Bickle and the Beatles, Asian filmmaking appears to be gazing fondly to the cinematic past but with its lens set assuredly on the new millennium.