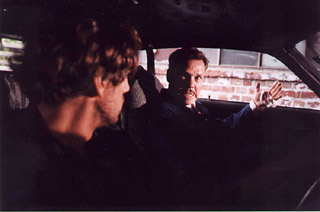 At last, an Australian heroic bloodshed actioner that doesn’t skimp on sex, violence and other funny stuff. In fact, sex is the weapon of choice in Sensitive New Age Killer (2001), as it madly expedites the lives, loves and fears of an outwardly normal set of suburbanites, sometimes punctuating it with a rain of blood and bullets. But as triple threat filmmaker (co-writer, co-producer and director) Mark Savage said in between distributing flyers for his film on the streets of Melbourne, “It all gets pretty silly, pretty quickly.”

As reported here last year, July 2000 was Mark Savage month in Melbourne, having films screening at both the Melbourne International Film Festival (MIFF) and the Melbourne Underground Film Festival (MUFF). Now he returns, four-walling Australia with twenty-seven prints of his killer comedy thriller Sensitive New Age Killer (SNAK). “The biggest release in this country independents like us have ever achieved”, stated producer John Brousek to an anticipation-addled audience gathered for the National Premiere held on May 30, 2001.

SNAK as the nifty acronym goes, spits out a comic tale of lust, loss, learning, and handguns, largely through the eyes and narration of one Paul Morris, family guy and freelance hit man, played by no-budget film titan Paul Moder (he steals the show in Bloodlust [Richard Wolstencroft and Jon Hewitt, 1992] and many others, and also literally blows up SNAK). He’s not the clean-cut bloke pictured in the film’s ad art but rather someone at the end of their tether. All his current endeavours have crashed and burned. His work rate is spiralling into non-existence and there’s an ugly negative impact on the quality of his family life. Even the sexual blackmail that he’s ‘suffering’ is going nowhere. Then, a glimmer of hope when he learns his life-long idol is coming to town. While violent confrontation is a frequent feature of this flick, our hero also experiences many revelations concerning his network of family, friends, and associates.

SNAK places all its relationships askew in a number of clever and interesting ways including the use of role reversal and arcane language. Then it puts them together again with chicken wire, gaffa tape and a fantastic sense of reality. All characters are writ large in SNAK and the fine cast is armed and ready. This immediately elevates SNAK beyond faceless straight-to-video material. Kevin Hopkins as George Hartley, best buddy of Paul Morris, and Helen Hopkins (real life wife of Kevin) as Paul’s wife Helen, each have their moments but it’s Carolyn Bock as Matty McKlean and Frank Bren (looking and sounding like he just stepped out of the opening credits) as “The Snake”, who chew large amounts of scenery.

The mayhem includes cremated body sniffing, a last heartbeat obsession, bum flashing, rape at gun point, red rattler pyrotechnics, gunfire a’ plenty, dead bodies piled up in mounds, The Masturbating Gunman, twisting subplots, and Colin Savage flying through the air as Unstoppable Bodyguard. Other highlights are the opening credits and a borrowed music score that successfully patches together material from recent Oz films, Two Hands (Gregor Jordan, 1999) and Strange Fits Of Passion (Elise McCredie, 1999), with original contributions from Cezary Skubiszewski, Rafael May and Ennio Morricone. In tandem and alongside the performance of Frank Bren, they inject a distinct aura of Euro sleaze into the proceedings. The other film model at play here is the contemporary Hong Kong action film, specifically The Killer (John Woo, 1989) and the work of John Woo in general.

Despite its frenetic pace and the fact that the filmmakers were working with only two fifths of the original budget (undisclosed), no amount of low budget ingenuity can hide its rough edges and flat spots. In some places it’s difficult to tell whether the director is just trying to emphasise the gravity of his lead character’s journey or simply couldn’t amass the same sort of energy for every scene. Also there’s nothing sensitive about Paul Morris and as for being new age, Paul and SNAK are straight out of the Now Age. The child in the ad art (who’s about to shoot Mum in the chest) isn’t theirs in the flick and SNAK presents some not pretty but very gritty pictures of Melbourne brick walls. All petty criticisms aside, you can rest assured that this is a rare case of Australian filmmakers bending over backwards to ensure there is bang for your bucks in their film.

Bound to be a six-pack hit, Sensitive New Age Killer is supreme dumb fun that would make a great double (at the Dromana Drive-In) with Cindy Sherman’s Office Killer (1997).