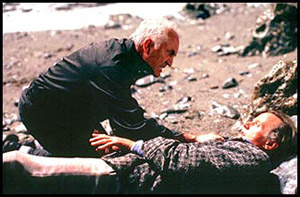 Steven Soderbergh’s The Limey (1999) is a brash economical movie full of self-reflexive ’60s interruptions and clenched teeth violence. From the impressionistic opening visuals introducing Wilson (Terence Stamp) as a gritty London ex-con wanting to avenge his daughter’s death, Soderbergh manipulates a series of dull expository set-ups (Wilson on a plane, Wilson in a taxi) into an exciting aural and visual flux of disjunctive spatial correspondents. The elliptical control of formal coda makes for a cluttered surface effect, designed in part for distraction and in another to disguise the fact that this story is an old-fashioned revenge yarn.

The premise is similar to Christopher Nolan’s Memento (2000), where a lone Gunman seeks personal vindication by locating and then destroying those responsible for the demise of a female loved one. Wilson is also continually haunted by old home movies of his daughter (and borrowed footage from Ken Loach’s Poor Cow [1967]). Furthermore, Soderbergh’s self-conscious formal preoccupations (quick cuts, time jumps) deployed with jigsaw lineage invoke another revenge/mystery masterpiece, John Boorman’s Point Blank (1967).

The refreshing thing inherent in this movie that ricochets from contemplative Coin Flats, Downtown Disasterville and then Waterfront congeniality is a deft shorthand sadly missing from Soderbergh’s previous releases, Erin Brokovich (2000) and Traffic (2000). Through this concise slickness and hurried methodology, Soderbergh works wonders with drab exchanges. Even the conventions of an obvious plot-point meeting between Wilson and Ed (Luis Guzman), a Cow Town Chicano with a social conscience (he wears Ché Guevara and Mau Zedung t-shirts) functions more as an oblique interrogation, brimming with dialogue bridges, rapid-fire inserts and blank looks from the actors. Guzman makes a good Second Banana, even if he registers only two good expressions: anxious and really anxious. Moreover, while Ed struggles to inform the malevolent Wilson of his daughter’s dubious relationship with dodgy record industry executive Terry Valentine (Peter Fonda), he’s soon assisting this displaced West-End Mad dog in negotiating the unfamiliar LA terrain. Before long Wilson becomes an amphibian adaptable to every environment (Dead End Warehouses), high society gatherings (Hollywood music parties) and Beverly Hills sophisticates (Lesley Ann Warren). Possessing the neo-noir hero’s paradox: Wilson like Boorman’s Walker (Lee Marvin) blends in everywhere yet maintains the marginal anonymity of a man obsessed by the truth. In a tailor-made role, Stamp resists the urge to overcook any of the self-pitying traits of the character. He is good at virile implosion and even better at point-of-no-return conviction, dominating most of the film with a rigid scorn. The trouble rests on the other players, forced to share the screen with him (Soderbergh rarely relies on two-shot compositions for Stamp, conveying his performance largely in shot-reverse-shot machinations). Furthermore, one of the pleasures of this one-man-show is the lack of grandstanding by the minor players. Unlike the star system pyrotechnics of Douglas-Zeta-Jones-Quaid in Traffic, the minor roles of The Limey are less forgettable than what they should be. Bodyguards get the same dumbbell treatment as the heavies in Out of Sight (1998) yet each contributes a coarse liveliness to their allotted deglamourised screen moment.

Typical of a Soderbergh movie is the assertion that most low-lifers are comedians at heart. His aptitude for irreverent comic strokes emerging from sudden states of confusion is tantamount to his pulp selling style. And congruent to the movie’s generic conventions, is the old adage that when required hit men can always be located in Pool Halls, with the added dimension that they usually look like rock stars and possess Dick Cavett’s wit. Moreover these characters seem born out of an Eddie Bunker and I.A.L. Diamond one-night stand. Flamboyant spontaneity mixing nicely with terse fatalism is intrinsic to the mechanics of the script.

The humour of The Limey emanates from a slick-talk jag that is refreshingly dissimilar to the lead-weighted leftism attached to the majority of crowd-pleasing quips dumped in Traffic. Soderbergh and screenwriter Lem Dobbs achieve an unsteady throwaway screen suspension loaded with jaded pop-cultural observations. In a nice moment of take-it or leave-it comic verbiage, an enthusiastic party guest accosts Valentine over his former working relationship with Christopher Cross.

Fonda as Valentine does some of the best teeth flaring since Burt Lancaster in Vera Cruz (Robert Aldrich, 1954) and brings an affable dopey charm to a man up to his neck in past transgressions. The script is spiked with self-reflexive Fonda gags (like most movies he appears in these days) that grinds down his characterisation until his linen-clad Praying Mantis has nowhere else to go other than animating rotten lines such as “Fuck you, Jim. I don’t freak out any more!” while desperately trying to maintain a Cheshire Cat facade.

Although the script delivers sharp-edged dialogue, (Wilson observing Ed’s tattooed body): “You didn’t get that ink in the Navy, doing your National Service”, to broader noir assertions: “Different characters these days, different assumptions”, the movie fails to integrate the supposed cultural conflicts of a cockney colloquial in sun bleached California. Wilson may confuse Valets for ‘muscle’ and bamboozle a stern-faced Detective with East-of-the-Atlantic razzle-dazzle, yet this fish-out-of-water masquerade hardly reaches the complexity and ribald assuredness of Jim Jarmusch.

The Limey isn’t a film containing a pyramid of hidden meanings. Behind the hip-contemporary surface is a warm apple pie with a soft centre. Striving for pathos, Soderbergh instead achieves a mobile movie about an aggressive picture post-card universe filled with self-loathing characters. While lacking the serpentine gravity of Point Blank or the painstaking narrative assembly of Memento, this revenge movie has a pervading sense of loss and a melancholic awareness for breached innocence and regretful human choices. Wilson’s violence manifests itself as much from the dull images of a super 8 home movie camera as it does from a life lived as an outsider. Stamp’s slow-reveal performance is a tour-de-force comparable to Guy Pearce’s in Memento. Against the grain of the filmmaking, these lost souls begin disintegrating just as the plot calls for a materialisation. Like Walker in Point Blank, Stamp’s wandering obsessive loner has a lot on his mind. Rather than working a nightmare space into the locations, Soderbergh does something better – he allows it to exist inside Wilson’s head.