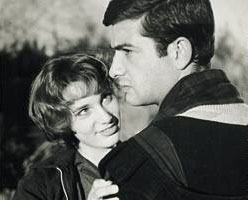 As unceremonious as it may sound, Claude Chabrol started the New Wave in 1958 with the release of his first film, Le Beau Serge (2). They were heady times. Though it was inevitable that the handful of cineastes who had been re-shaping film criticism in France with their publication Cahiers du Cinéma since the early ’50s would have turned to filmmaking, it was probably just as inevitable that their first films would have turned French cinema, as it was then known, on its head. In the broadest terms, after 1959, the cinema would never be the same.

By now, when it is possible to see the accomplishments of the Nouvelle Vague in the broader context of French cinema, it is clear that what most of them were up to (with the possible exception of Godard) was principally a purification and revitalization of what had always been latent in past work. They (Chabrol and Truffaut in particular) knew what antecedents to reference in their own work, as well as what standards at which to aim. As Vernon Young saw in 1965, “What should seem obvious to any filmgoer who is old enough to have a memory is that the similarities between this generation of film-makers in France and the preceding ones are more numerous than the discrepancies. However exuberant, experimental, informal, or even disorderly the new contingent has insisted on being, with whatever degree of seriousness its members have tried out audacities of narration and cutting, it has been working for the most part in what might be called the classical tradition of French cinema. This is to say that the new young men have rarely abandoned the intellectual schemata available to them and they have seldom operated outside the milieux of their predecessors.” (3)

Le Beau Serge is, of course, an ironic title. Serge (Gérard Blain) turns out to be anything but beau when François (Jean-Claude Brialy), his old friend, returns from Paris to his hometown in France’s Creuse region (the actual village is called Sardent, whose citizens and authorities are thanked for their cooperation at the beginning of the film – another irony?). Quickly, François discovers that ten years have not been kind to the people he left behind. On his arrival – a splendid, prolonged opening sequence – he recognizes his old friend walking away from him and calls out his name. Serge turns, but shows no sign of recognition. “He never notices people when he’s drunk,” Michel (Michel Creuze), his guide, tells him.

François has come back to his native village to convalesce. He has been suffering a near-fatal illness and hopes to find some peace and quiet. That he finds neither is largely his own fault. The life of his friend has degenerated to a shocking degree. Serge is married to Yvonne (Michele Meritz), who adores him, but whom he treats with disdain since their first – stillborn – child was deformed. He drinks almost incessantly with an older man named Glomaud (Edmond Beauchamp), who may or may not be the father of Marie, the local siren. As the proprietress of François’ pension tells him, Marie goes with a different man every day. That François turns out to be one of them is perhaps a happy accident in casting. Marie is played by Bernadette Lafont with a kind of predatory allure. She manages to be almost completely sexual, though her character is only aged seventeen. (Mlle Lafont herself was just nineteen during filming.)

François decides, thanks to Chabrol’s professed Catholicism, to make a difference in his friend’s life. Serge implores François to leave town. Even the local priest, somewhat less of a crusader than Bresson’s, advises him that he is probably doing mare harm than good.

One afternoon, Glomaud sees François in the hotel tavern. He tells him to buy him a drink, but François refuses. “You won’t drink with me, but you’ll sleep with my daughter?” Glomaud yells. All François can repeat in his defense is the unsubstantiated rumor that Marie is not his daughter. Glomaud calls witnesses to attest to François’ statement, then stumbles off to rape Marie, whom he has reputedly lusted after for three years. François, finding Marie in tears (“he entered like a serpent,” she tells him), chases down Glomaud who is trying to escape through the local cemetery and throws him to the ground. Bewildered, François flees to his hotel room. Serge visits him there and the following exchange occurs:

François: “That’s not true. You’re like animals, as though you had no reason for living.”

Serge: “We haven’t. How could we? The earth’s like granite; they can barely scrape a living. They work because they’ve no choice.

Serge looks out of the hotel window at children being dismissed from school.

Serge: “Come and look. Miles to walk home, often in deep snow. Still, they want to learn. We’re animals, but who cares? Everyone can’t simply leave. You understand? It’s like a baby couldn’t walk if there were no one to show him how.”

Every event adds to François’ complete incomprehension of the villagers. At a local dance, he suddenly objects to Serge’s callous treatment of Yvonne. He follows Serge into the street and gets a beating for his troubles. The villagers watch, exhorting Serge to “teach the Parisian a lesson.” Stubbornly, François stays in the village to perform what he believes will be some transformative act.

It begins to snow. One night, with Serge unconscious in some “chicken run,” François hurries to the aid of Yvonne, who is in labor. He manages to locate the town doctor, who is nursing Glomaud through one of his withdrawal episodes. Marie is there to taunt François. Our last look at her, as the door closes, is of Marie, sitting beside the bedridden Glomaud, his hand on hers.

The doctor is pessimistic of the child’s survival. They get to Yvonne in time, but all she can do is cry out Serge’s name. Already coughing, apparently weakened by the cold, François goes out once more to locate Serge. Finally, he finds him in a barn and literally has to drag him through the snow. Once arrived, he awakens Serge with a handful of snow in his face, just as his son’s first cries break the silence. François, perhaps fainting (or collapsing?), utters his last words, “I believed.” Serge, hearing his healthy son’s cries, weeps from joy.

Chabrol made his first film in a raw, unadorned style, using real locations, a handful of professional actors and a multitude of “non-professionals.” With his cinematographer Henri Decae (and the camera operator Jean Rabier, who would soon become Chabrol’s third eye), he succeeded in capturing the detestable conditions of a particular backwater of regional France. We’ve all seen such places, even if it may seem we sometimes live in them: the squalor; the quite unbelievably casual attitude toward such imponderables as incest; the occluded horizons. Chabrol’s characteristic themes were already evident in Le Beau Serge. Clearly, he was another of those filmmakers who spent a long time thinking about films before he had a chance to make one. This explains the astonishing completeness of the New Wave’s first films. Whereas Antonioni and Bergman, to name just two of their generation, needed several years of apprentice work before finding their mature voices, Chabrol, Truffaut, Resnais, and Godard had, before they ever set foot behind a camera, arrived at an understanding of exactly where they wanted to go.

Le Beau Serge is also far less schematic than Chabrol’s later, “Hitchockian” work. Its allegorical levels are, consequently, far more accessible. And, unlike much of his work in the ’60s, one has the definite feeling that Chabrol actually cares for the people in his film, as much as he detests the village in which so many of them seem to be trapped. His subsequent work would show greater technical proficiency, at the expense of human content.

[A note to remind all of us of our respective ages: Gerard Blain, Serge in Chabrol’s film, died last December 17, after a long and lucrative film career. He was 70.]