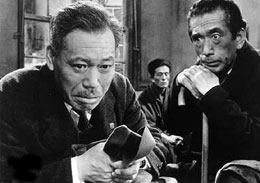 Ikiru was directed by Akira Kurosawa in 1952, sandwiched between Rashomon (1950) and Seven Samurai (1954). While not as widely recognised as these two films, Ikiru is a masterpiece that revolves around a subtle but intense inner conflict.

In contrast to the samurai films, Ikiru takes place in modern Japan. It tells the story of Mr Kanji Watanabe (Takashi Shimura), a senior public servant who finds out he has terminal cancer and only a short time left to live. Mr Watanabe comes to the realisation that he has become trapped in his life, and seeks to give meaning to his last few months. What differentiates this film from thousands of Hollywood telemovies on the same subject is Kurosawa’s non-linear use of time, and the utilisation of different character perspectives. The title of the film comes from the Japanese word for living.

The film consists of two distinct sections. The first section starts by showing how meaningless Mr Watanabe’s life has become, by following the misfortunes of a community group battling with government officials over a vacant block of land. Kurosawa uses his first manipulation of time in a series of shots showing the group being frustrated by the wheels of bureaucracy. Department after department shuffle the group along until they end up back where they started. The dissolves between each of these shots indicate time passing, and by the time they have gone full-circle Mr Watanabe is now out of the office and off to his fateful medical appointment. This temporal ellipse is the first of many that Kurosawa uses in the film.

Once the protagonist discovers his condition, Kurosawa further examines the futility of Mr Watanabe’s life by exploring the relationship he has with his son. This involves the past and present seamlessly dissolving between the then and now. Kurosawa not only plays with the visuals of past and present but also uses the voices of Mr Watanabe and his son Mitso from his childhood and the present. Through the use of such techniques Kurosawa shows the awkwardness of the relationship and how Mr Watanabe has misread the importance of it.

Realising work and family have both been a failure to this point, Mr Watanabe begins his quest for fulfilment that sees a chance introduction with a novelist. He gets the novelist to show him a good time and is taken through the vices of modern Japan – pinball, alcohol, strip clubs and dance halls. But trying to drown himself in a sea of after-hours humanity proves less than satisfying, so his quest continues. The next phase involves the young girl who worked in his office. She has sought him out because she needs his signature to move from her current job to a different one. The encounter leaves him in a temporary state of infatuation; not on a sexual level, but that of an older person feeding off a younger vibrant energy. He has trouble expressing it himself:

Toyo: What help am I?

Kanji: You – just to look at you makes me feel better. It warms this – this mummy’s heart of mine. And you’re so kind to me. No; that’s not it. You’re so young, so healthy. No; that’s not it either… You’re so full of life. And me… I’m jealous of that. If I could be like you for just one day before I died. I won’t be able to die unless I can do that. I want to do something. Only you can show me. I don’t know what to do. I don’t know how. Maybe you don’t know either, but, please… if you can… show me how to be like you!

These scenes are extremely uncomfortable to watch as you can almost feel Mr Watanabe trying to drain the life out of his young co-worker. She misreads his sentiments as improper advances, while for Mr Watanabe the realisation that the company of a younger woman was not the answer he was seeking leads to his final enlightenment. He remembers his position and who he is: his quest for meaning must come through that. The final part of this first section gives us an inkling as to what Mr Watanabe’s activities might be in his dying days.

The second section of the film cuts to the funeral as his workmates and remaining family try to piece together his last weeks. Much of this revolves around speculation about whether or not he knew about his condition. By changing the perspective, showing these events through the eyes of his co-workers and family after his death Kurosawa has risen above cliché and sentimentality to create a genuinely moving masterpiece of the cinema.

Along with the various uses of time and perspective in the narrative, Ikiru displays all the other hallmarks that make Kurosawa such an important and influential filmmaker. The framing, shot composition and editing techniques all beautifully work together to bring out the story the most dazzling of these being the sequence reminiscing about his son. The dissolves and the matching of shots past to present are used to such effect that the audience is left feeling his pain not of imminent death but wasted life. Special mention must also go to Takashi Shimura’s beautiful performance as Mr Watanabe. Shimura and Kurosawa worked many times together, most famously in Seven Samurai where Shimura played the head samurai. As Mr Watanabe, Shimura’s mannerisms and reactions take the audience into the inner most depths and thoughts of the character. His performance lingers through the second half even though we barely see him.

Having given us an insight into Mr Watanabe’s search for meaning the audience is in a privileged position. At the funeral, the audience knows the circumstances but not the events leading up to it. The characters are in the opposite position, as they know the events leading up to the death but not Mr Watanabe’s situation. In having his colleagues figure out for themselves the circumstances of his death one can really appreciate his final deeds and the fact that he did finally break out of his existence to enjoy his remaining months. But this one fact doesn’t take away from the film’s bleak outlook on humanity, and the really sad thing is that regardless of the different time and culture it is as poignant and relevant for an audience watching it in Melbourne today. It is a deliberately slow-paced film, and enjoyably so. If you stick with it you are in for a truly great cinematic experience but also a lot of personal soul-searching. You have been warned.