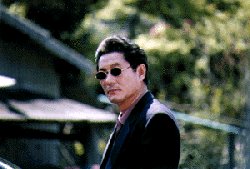 All of Takeshi Kitano’s films are marked by a high degree of narrative ambiguity, but his 1997 feature, Hana-Bi, is distinguished from his earlier work by the degree to which the multiple meanings emanating from Kitano’s own cinematic presence dominates the viewer’s experience of the film (1). As the central protagonist, Detective Nishi of the Tokyo Police, Kitano appears in nearly every scene of the film, and as director, he relentlessly focuses the camera on his own frequently immobile body. Hana-Bi‘s action turns on a tension between these moments of stillness and flashes of intense, penetrative violence. The result is a taut atmosphere of explosive calm.

As Hana-Bi begins, Detective Nishi has recently lost his only child and his wife is dying of cancer. Early in the film, while Nishi is visiting his wife in hospital, his long-standing police-partner and friend, Horibe (Ren Osugi), is shot and paralysed during a stakeout. When Nishi and two other policemen attempt to tackle Horibe’s assailant in a busy shopping mall shortly after the shooting, one of the policemen is killed in the ensuing fight. Plagued by guilt and an almost overwhelming sense of loss, Nishi leaves the force and, through a series of not always lawful acts, attempts to retrospectively validate a life gone horribly wrong.

It takes several viewings to completely untangle the details of Hana-Bi‘s intentionally fragmented and non-linear narrative. The tragic events at the shopping mall, for example, are revealed only gradually, as Nishi periodically recalls moments from the shooting in minute detail. The viewer is forced to participate in the story’s construction, sorting through each scene in an active process of interpretation. Narrative thrust is submerged to the point where it no longer dominates the spectator’s interpretation of, and relation to, the image, thereby allowing resonances and meanings lying beyond the narrative realm to enter into our reading of the film.

The sense of arrest that dominates Kitano’s performance in Hana-Bi encourages the viewer to study the image on screen, rather than simply engage with the image as the agent of a vigorously asserted narrative ‘present’. Kitano places his own body at the centre of the highly charged zone between stasis and action, constituting a site in which performance and neurotic self-obsession blur and intermingle, simultaneously anchoring and destabilising the text’s meaning. As Howard Hampton notes in his article “Good-as-Deadfellas”, Kitano’s acting style is not intended to facilitate identification or sympathy (2). His hypnotic inertia creates a subjectivity alienated from the audience, generating an unsettling ‘otherness’ on screen. The sense of distance this produces allows non-fictional elements to enter our experience of the image, opening Kitano’s presence on screen to an affect normally associated with still pictures.

In distinguishing between film and still photography in Camera Lucida, Roland Barthes claims that the cinema constrains the viewer to a “continuous voracity; a host of other qualities, but not pensiveness; whence the interest, for me, of the photogram” (his italics) (3). Kitano’s particular employment of arrest allows for precisely the kind of pensiveness Barthes describes to encroach upon our experience of the moving image. The viewer is led to question the nature of Kitano’s filmed body, whose sheer weight of presence on screen seems to transcend purely artistic intention.

Walter Benjamin discusses the tendency of the photographed body to exceed strictly intentional meaning in his 1931 article “A Short History of Photography” (4). Benjamin notes that in viewing a photograph, the spectator primarily responds not to the artistry of the photographer, but the mechanically produced and seemingly literal presentation of a past body. Describing a photograph of a Newhaven fishwife by David Octavius Hill, Benjamin writes: “In photography.one encounters.something that cannot be silenced, that impudently demands the name of the person who lived at the time and who, remaining real even now, will never yield herself up entirely into art” (his italics) (5). By art, Benjamin means the interpretive, cognitive processes which by necessity always dominate a process such as painting. The automatic technology of traditional photographic processes (the issue of digital technology is, of course, another matter) means that there is always, or at least potentially always, that in the image which exceeds the artistic intention of the photographer. There is always the unforeseen spark of chance that eludes to a presence in the image that is not purely the interpretive creation of the photographer.

Our response to Kitano’s photographic trace in Hana-Bi is obviously not the same as that towards an anonymous Newhaven fishwife, but the weight of Kitano’s presence in the film does encourage the viewer to recognise his image as being something other than exclusively narratively motivated. Kitano consciously blurs the normally contained ambiguity inherent in the relationship between the enactment of a fictional character and the existence of the real performer at the moment of the image’s production. At a surface level we read Kitano’s photographic trace as Detective Nishi of the Tokyo Police Department. Below this, we are also forced to acknowledge the existence of a real body existing in and around the images on screen. We relate to Kitano’s character in a manner described by Jean-Louis Comolli thus: “we are summoned to the delicate exercise of a double game: it is him and it is not, always and at the same time; we believe in it and we do not, at the same time.” (6)

The registration of a pro-fictional level of meaning in the image in Hana-Bi is reinforced by the story itself. While the film is clearly not autobiographical (Kitano is far too canny a media operator to place his life directly on screen), it does gesture to, and orbit around, certain displaced biographical details of its creator.

When Nishi’s partner, Horibe, is shot and paralysed, he is quickly deserted by his family. Alone, jobless, and bored, he is eventually driven to an unsuccessful attempt at suicide. Nishi sends Horibe a package of art materials; after recovering from the failed suicide, Horibe slowly embarks on a series of paintings. The pictures are skilfully woven into the film’s surface, becoming a poignant counter-point to Nishi’s journey, as he attempts to overcome his own emotional paralysis. Like the Horibe character, Kitano took up painting when he was immobilised for an extended period following a near-fatal motorcycle accident in August 1994 (7). The paintings that appear throughout the film are Kitano’s own work, produced in the time since the crash (8).

More importantly, the pro-filmic details of Kitano’s life experience are also evoked in Hana-Bi at the level of Kitano’s own physiology. When compared to his earlier film appearances, Kitano has clearly aged in Hana-Bi, but this is not solely the result of passing years. Kitano openly displays the physiological traces of his near-death experience, as the camera constantly lingers on his partially paralysed features and facial tics.

Kitano has referred to his accident as “an unconscious suicide attempt”, and anyone familiar with his work cannot miss his obsession with violent death (9). Every protagonist which Kitano has played in his self-directed movies, from Violent Cop in 1989 to Hana-Bi in 1997, has committed suicide or deliberately entered into a final, violent show-down against suicidal odds. In Hana-Bi, this recurring focus on violent demise is given extra weight by Kitano’s own near-death experience. His personal trauma, always physically present in the scarring apparent on his body, constantly shadows the film’s fiction, demanding a consideration of the image which goes beyond a straight-forward reading of the story.

Hana-Bi becomes, in effect, a disturbing inflection of Kitano’s own violent ordeal. The director’s own filmed body becomes the film’s central object; an elusive, ambiguous, and highly unstable centre of meaning, existing in and around the images on screen, and never quite being entirely contained by narrative intention. It is Hana-Bi‘s ability to resonate on multiple symbolic levels evoked by the fiction, while simultaneously exceeding the limits of explicit narrative discourse, that renders the film such an unusual and rich cinematic experience.