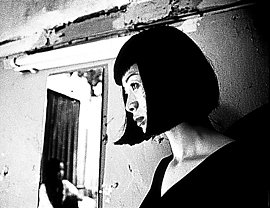 But these directors are simply the most celebrated – there also exist many others, either underground (for example, someone like Kenji Onishi – see my Some films of the ’90s article), newly-recognised (for example, Miike Takashi at this year’s Rotterdam film festival), or emerging.

It is these “emerging” ones that this Eastern Connection II (ec2) program tried to highlight. I say “tried” because one can only do so much within the parameters of 8 films (4 features, 4 shorts) from 6 different countries (Thailand, Hong Kong, China, Taiwan, Japan, South Korea).

Congratulations to all involved (MRC, AFI, AFC, Screen West, etc.) for putting this program on. It certainly gave Australian audiences a chance to see some of this work, work that may not be screened by the major festivals (Sydney, Melbourne, Brisbane).

But I must point out that the Melbourne screenings were poorly attended (30 odd per session, rather than, say, 80 odd). This is an indictment on the Melbourne film-going audience, rather than on the publicists.

In conjunction with the screening of the films, an “AFI Conversation on Film” was held, chaired by critic Stephen Teo, and featuring Kal Ng (the director of one of the films) and Jimmy Choi (director of the Film and Video group within the Hong Kong Arts Centre).

This was a typically depressing and heartening talk, as the portrait was painted (with different brush-strokes and in some detail) of the struggle filmmakers face trying to make films at the independent level. Jimmy, quite a passionate individual and obviously committed to the cause, gave a potted history of Hong Kong independent/underground cinema since the ’60s, and also outlined his current efforts in organising co-operative and community filmmaking ventures within Hong Kong. Kal, on the other hand, spoke on behalf of those filmmakers who are at the next level, those who have made a feature or two with reasonable funds, but who then find that their films cannot attract sales to distributors.

Synopsis: Two men are staying at the same motel in the American hinterland. One is a Korean who carries a 16mm camera; the other, an Israeli who murmurs in Hebrew each night in his room.

Review: A Wong Kar-wai influence undoubtedly: nightscapes, lonely rooms, haunted looks. But a somewhat pedestrian rendering by the director (of course, an early film in his career): the film/memory flashbacks are too quick and lifeless, the form clearly overshadowing the content (eg. the filmmaker’s girlfriend’s face never seems clear). Still, the spatial and temporal displacement (of the two men from their respective loved ones) on show is quite affecting. (5)

Synopsis: Jenny is caught between two realities – her life in Hong Kong and her life in Toronto. Suffering from insomnia and worrying over her missing boyfriend, she comes across a computer networking service that allows the player to visit their dreams.

Review: A very good-looking film, in glorious widescreen, containing some quite stunning vistas: empty airports, golden dunes, city streets at night. And the soundscape is experimental and eerie. But the storyline lacks structure, the interactions lack emotion, and the budget lacked money (to adequately handle the “dreamtrip” theme). A somewhat flat and passionless film. (5)

Synopsis: Xiao Wu is a likeable petty criminal whose “trade” skills are fast becoming out-moded by the rapid progression of contemporary Chinese society. Disrespected by his former best friend and partner-in-crime who has suddenly moved up to become the town’s model entrepreneur, Xiao Wu feels unable to let go of his old ways and embrace the new.

Review: A low-budget neo-realist spiritual drama, as if Bresson’s pickpocket suddenly found himself looking for a stolen bike. Maybe throw in “formalist” as well – what a soundtrack! The main actor is a find, with that upward-turned cigarette. Episodic in structure, but each episode builds on the last. No happy ending of course, but a feel-good film nonetheless. (7)

Synopsis: This debut feature from Yu Lik Wai traces the lives of several “economic migrants” from mainland China who find companionship as they struggle to keep afloat on the fringes of respectable Hong Kong society.

Review: An ambitious but only partially-successful film. Its sweep is beautiful and its sense of feeling mature, but it is way too ponderous and subdued to really be powerful. It has a good script, aware of people’s frailties and the gaps in life that can’t be filled in, but it doesn’t counterpoint this knowledge with anything positive. (6)

Synopsis: This fascinating and controversial documentary explores the human side of the followers of the infamous Japanese cult, Aum Shinrikyo. Director Mori Tatsuya began shooting A in the aftermath of the cult’s crimes, six months after the main leaders had been arrested. He documents the daily lives of the followers over a period of 30 months, under siege by the police, media reporters and broader Japanese society.

Synopsis: Revealing Bangkok society through the eyes of a cab driver, BKK1998 offers a gutsy portrait of survival mechanisms in a city where life and values are dirt cheap.

Review: Rough-and-tumble pseudo-doco portrait of a young taxi driver and young girl as they traverse through the seedy corridors of Thai life. A post-modern collage that doesn’t really offer much – no terror, no insight, no hope. (4)

Synopsis: Drawn by dreams of bright lights, money, success, and fueled by the desire to escape their pasts, three provincial Chinese girls find their aspirations shattered.

Review: Life Will Tear Us Apart, the prequel, from director Yu Lik-wai. Again, such formal beauty, and such an emotionally rich palette – for a flat result. Maybe Yu is another Akerman or Ozu, and we just don’t know how to unlock him as yet. As Adrian Martin said in The Age, a director to keep an eye on. (6)

Synopsis: Shot over the period of a year, this documentary is an extraordinary exploration of a friendship between the subject, a 30 year old man with AIDS, and the filmmaker, aged 26.