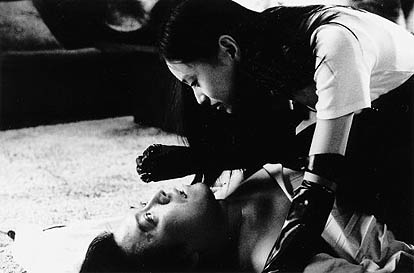 This essay was originally published in the promotional material for the Brisbane International Film Festival.

I have a feeling that for a moment at least I may be the only person in the country to have seen even a quarter of the films made by Miike Takashi. And from the first of them I’ve been hooked. A solitary Japanese hitman carries out a contract in a rain soaked and very scuzzy part of Taipei. He botches a job, gets taken up by another gang, performs admirably but is then betrayed as part of a gangland peace deal. Yeah.I know Jim Jarmusch seems to have knocked off most of the idea for Ghost Dog (1999). Never mind. Three years ago Miike’s Rainy Dog (1997) just bowled me over with its quite extraordinary narrative and in the way it piled on the elemental forces – most especially the rain just teemed down, like the final scene in Seven Samurai (Akira Kurosawa, 1954). The female interest was provided by the hard hearted hooker who dumps a kid on the hitman and the other hooker who, despite herself, starts to care for the two helpless males whose path she’s crossed. Then there was the intricate narrative with the kid only learning what his father does for a living when he accompanies him on a job. This was a movie that swept you up and blew you away. I couldn’t wait for more.

Blues Harp, made the same year, also picked up on the underworld milieu. This time the outcast was a half black, half Japanese bar attendant who couldn’t seem to keep out of trouble but ended up being able to look after himself. For a change of pace, Miike also knocked out that year a magical pastoral comedy set in China, which followed the adventures of two Japanese businessmen who slowly become entranced by the rural charm. The Bird People in China was a mixture of Renoir and Iosselliani and I loved it as well though I had the feeling that Miike was at his best in the more visceral underworld milieu of the other two films.

Since then the director has knocked out another three feature films (Ley Lines, Andromedia, D.O.A) and a three-part TV serial. It’s hard to think of anyone else in years, at least with even remote pretensions to quality, being so prolific. You can read more detail in Tony Rayns’ article in the May 2000 Sight & Sound which makes a sterling effort to provide some perspective on a director who has already got close to a dozen features under his belt.

This year’s Melbourne International Film Festival showcases at least one Miike film, and for that we must be grateful. The rest will have to wait for another day. Perhaps when it happens it might start with his already legendary triad trilogy, completed only last year, Shinjuku Triad Society (1995), Rainy Dog (1997) and Ley Lines (1999).

In the meantime, what can be said about Audition (1999), a departure into the psychotic thriller compartment and one which might just frighten you out of your wits.or appal you? No difference for Miike I suspect. When the film was screened at the 29th International Film Festival, Rotterdam earlier this year the director reported that people came up to him afterwards and said “You’re sick”. Well, no he ‘aint. He just has a finely tuned eye for an image and a sequence that can chill you to the bone.

Audition is a ripsnorting horror movie that starts off looking like an Ozu picture. A widower is encouraged to look for a bride. He is too shy to make the first move and a friend hits on the idea of pretending they are casting a movie. His eye is taken with a young woman in white. Her apparently docile nature complements her fragile beauty and things start to develop quite sweetly. But you know something’s wrong. So, after a moment that gives the audience one of the great shivers of cinema history, the calm is invaded by something like a John Carpenter flick on speed. Audition has already played more festivals than all the other Miike films combined and I can’t believe it won’t knock the stuffing out of every would-be-commercial picture on show this year.

Which is what Miike is all about – at least up until now. At a frenetic pace he’s turned out some of the toughest thrillers imaginable and he’s now added a grim expertise at horror that doesn’t let up until it’s all over. When you see Audition you’ll know what I mean. And I think you’ll want to see more.