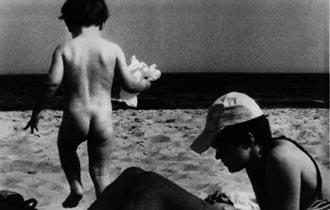 Over the past two decades, Su Friedrich has crafted an eloquent body of films which probe many of the most intimate and fundamental concerns of emotional experience: dreams (Gently Down the Stream, 1981), sexuality and religion (Damned If You Don’t, 1987), marriage (First Comes Love, 1991), break-ups (Rules of the Road, 1993), adolescence (Hide and Seek, 1996), and relationships to parents (The Ties That Bind, [1984] and Sink or Swim [1990]). Sink or Swim charts-literally at one point with a kinship tree-Friedrich’s relationship to her father, a relationship conditioned both by the traumas occasioned by his particular coldness, even cruelty (the film’s title is emblematic), and by the larger cultural conditions of gender, marriage, and parenting roles endemic in Anglo-American culture of the 1950s. Although the film deals with the issue of emotional childhood abuse, it is even-handed in its portrait of a career-driven and emotionally disconnected father; as one critic suggests, “It doesn’t come across as a strident denunciation of your father and the pain he inflicted on you, so much as a series of tales in which both of you are wounded because of the family structure” (1). Friedrich manages this double focus-personal and cultural-through her extraordinary formal care (Sink or Swim took 3 years to make) and her balance of direct personal expression with a mediated critical structure; as one critic said, the film is “tough-minded and touching” (2). For Friedrich, “The issue for me is to be more direct, or honest, about my experiences, but also to be analytical. I think there’s a problem in people seeing my films and immediately applying the word personal. Sink or Swim is personal, but it’s also very analytical, or rigorously formal” (3).

Friedrich’s exploration of fundamental concerns of emotional experience are motivated by her personal experience: “You get to something universal by being very specific [. . .] I think you have to start at home” (4). The textures, cinematic and emotional, of Friedrich’s work are both private and highly mediated, embodying an aesthetic style and range of concerns that make her one of the most innovative and accessible artists currently working in the dynamic tradition of the modernist American Avant-Garde:

Whenever I set out to make film, my primary motive is to create an emotionally charged, or resonant, experience-to work with stories from my own life that I feel the need to examine closely, and that I think are shared by many people. I then try to find a form which will not only make the material accessible, but which will also give the viewer a certain amount of cinematic pleasure. In that I feel somewhat akin to the structural filmmakers, since I do like to play with the frame, the surface, the rhythm, with layering and repetition and text, and the other filmic elements. (5)

Friedrich tempers the painful and urgent personal emotion of the film by offering aesthetic pleasures effected by the exquisite textures of her visual and aural style. The imagetrack is composed of home movies, found footage, and Friedrich’s own rich cinematography, frequently re-photographed through her renowned optical printing to modulate intensities of light, contrast, grain, rhythm, and flicker. Friedrich creates evocative and ironic resonances between what seems to be home movie footage of her own family and television imagery of American 1950s “perfect family” sitcoms (with such suggestive titles as “Make Room for Daddy” and “Father Knows Best”), locating her personal history within a larger social mythos. The soundtrack displaces the often self-indulgent tone of the first-person autobiographical text (which, however heartfelt, can distance rather than engage a viewer) by having Friedrich’s story read by a young girl addressing herself in the third person: “the girl” and “the father” take on wider resonances than Friedrich’s singular personal history. Language appears in voice, text, and song; Sink or Swim also uses articulate silences to shift attention from image to soundtrack.

Language is furthermore crucial to the film’s unconventional narrative structure: Friedrich tells the story of growing up with her father through 26 “short stories,” each corresponding to a letter of the alphabet. Notably, this structure of development is presented backwards from Z to A, suggesting the rebellious nature of Friedrich’s project: to “unlearn” her upbringing, and attempt to exorcise some of the founding traumas of childhood. Friedrich suggests some personal and cultural resonances of this structure:

I got the alphabet idea at the very beginning. My father is a linguist, and of course language is made up of the alphabet. And because the film is about storytelling and speech, I wanted to keep the alphabet in the forefront during the whole film. It’s a very vivid experience of childhood to acquire the alphabet and then to acquire the use of words. Traditionally, the primer is meant to teach you the alphabet, but at the same time it teaches you a certain kind of morality. (6)

Friedrich links the alphabet, the founding structure of language, to its primary pedagogical function, the learning of social and psychological rules. The Law of the Father, the acquisition of language, the super-ego, family ties: all are linked to the linear structure of the alphabet, here subverted through its reversal. Friedrich moves from “Zygote,” a scientific beginning of life, to the final entry, “Athena/Atalanta/Aphrodite”, a mythological trinity which encapsulates three images of women: the stern goddess of knowledge sprung motherless from her father’s head; a girl abandoned by her father, raised by she-animals, who outraces and kills her would-be male suitors; and finally the goddess of eros who tames Atalanta and tricks her into marriage. Friedrich also cites one of her father’s books, in which he points to the need to integrate sexual and maternal images of women (in the figures of Aphrodite and Demeter), an integration he was clearly incapable of in the filmmaker’s family. Dedicated to her father’s third wife, his book becomes, in the film, an emblem of retrospective blindness and insight for Friedrich who insists on her own particular condensation and interpretation of female mythological figures, while marking the ironies of her father’s “conclusions”.

The film concludes with a series of both moving and humorously self-ironic stories which suggest the perhaps inescapable psychological structures that the Father sets for all subjects. In the penultimate section, we hear a story of an encounter between a now adult Friedrich and her father with his 11 year old child from his third marriage. The father interrupts a story being told by the young girl, telling her it is “not interesting enough”; the episode concludes with Friedrich looking out at her father and young daughter, the father distant, reading a book, the young girl, alone, trying “to invent a more interesting story”. On the imagetrack, we see the filmmaker trying hard to image herself as “bad daughter”, rebelliously smoking and drinking in bed, watching TV, lying naked in the bathtub. The last image is a close-up on a cluttered ashtray with a book of matches emblazoned with the words “WILD/ADULT”. Friedrich elucidates the powerful structuring force of daughters performing for fathers; whether trying to please or displease him, his judgement still conditions her actions. The film ends with Friedrich singing “The Alphabet Song”, with its haunting final words, “Now I know my ABCs/Tell me what you think of me”.

Sink or Swim has won the following awards

It was also selected for the 1991 Whitney Biennial.

Su Friedrich has been awarded both Guggenheim and Rockefeller Foundation Fellowships.