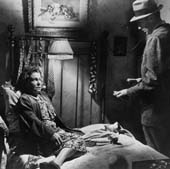 Writer-director Samuel Fuller opens his sixth film, a low-life, petty criminal, nominally anti-Communist B-pic, with a wordless sequence of striking virtuosity. The film opens in a New York subway car during rush hour. It’s packed–standing room only. No dialogue–just train noises. We recognize Jean Peters, looking very trampy, gazing vacantly out the window. We don’t know her character or her place in the story–whatever that’s going to be–and the screenplay refuses to divulge these things (nor does the deadpan acting prepare us for the vigorous performances to come–in the cases of Widmark, Peters, and Kiley, downright athletic). Willis Bouchey is very interested in her–he’s watching her like a hawk, and so is his offsider (we know their relationship from their exchange of glances as the scene developes). Fuller builds this through medium shots and close-ups. Then a very well-groomed Richard Widmark enters the car in a pale grey suit, neat tie, and snapbrim fedora, carrying a folded newspaper. He slides between people until he finds a space opposite Peters. Bouchey isn’t interested in Widmark. Widmark surveys but avoids making eye contact. The close-ups shift to waist level, between Widmark and Peters. He places the folded newspaper over her purse. Under the paper, his hand opens the purse and slides in, firkles about, removes the valuables, closes the purse. Peters is none the wiser (a fair description of her character in the ensuing story), but Bouchey is watching. It takes him a minute to figure out that he has just watched a professional pickpocket at work. Perfect timing: by the time he does, Widmark has exited at his stop. Bouchey and sidekick, frustrated by the crowd, can’t follow him. It is a stylish and seductive opening (and it will be reprised at the climax of the film as Widmark surreptitiously disarms his unknowing enemy). (1)

Pickup on South Street is a good introduction to Fuller’s tabloid world in all its breezy improbability. The hero, Skip (Widmark), is a small-time pickpocket, a three-time loser just out from his last jolt; one more arrest and he goes back forever. The heroine, Candy (Peters), is no better than she needs to be (she asks Skip how he got to be a pickpocket; indignantly, he replies, “How did you get to be what you are?” which, combined with her fashion choices, makes it pretty clear for 1953). She is the mistreated girlfriend of Joey (Kiley), posing as an industrial espionage entrepreneur. She doesn’t know he’s a Commie, or that he is having her deliver a strip of microfilm with state secrets on it to a contact who will take it straight to Moscow. Skip doesn’t know that he has stolen it with her wallet; when he finds it, he hides it, assuming (quite rightly) that it will have some exchange value. Willis Bouchey is an FBI agent shadowing Joey and Candy; he intervenes with Skip’s nemesis, Captain Tiger of the NYPD pickpocket squad, to cut a deal with Skip. Threading through this is Thelma Ritter as an aging professional informer used by all the other characters in their pursuit of each other and the microfilm.

In their own contradictory ways, Candy and Skip become a couple (‘fall in love’ somehow doesn’t quite fit the film’s emotional aesthetics). Anna Dzenis found Fuller’s later gangster film, House of Bamboo (1955), the most romantic film she’d seen all year, a judgment which surprised many. In a similar way, Pickup on South Street is Sam Fuller’s cheerfully iconoclastic romantic comedy. Candy has to find Skip in order to get Joey’s film back; when she does, in Fuller’s version of a “cute meet”, he knocks her out. And goes through her purse again. Later, in tight close-up two-shots, she tells him she’s kissed a lot of guys: “but it’s really different with you Skip–I really like you”. Skip answers: “Everybody likes everybody when they’re kissing.”

It was once popular to try to locate Fuller’s work within a 1960s-1970s political spectrum, but it didn’t work out well–he wasn’t that sort of thinker. The microfilm-Red agents McGuffin in Pickup, like the uranium in Hitchcock’s Notorious (1946), could as easily be 100% pure heroin, or diamonds, or–as Joey tries to persuade Candy–simple, bread-and-butter industrial espionage. And while the dialogue establishes that the film’s demimonde characters, in a rough sort of loyalty, uniformly reject the commies, it also establishes that they actually don’t know much about what Communism is–except, of course, that it is the enemy.

Pickup was also a regular fixture on top ten lists of film noir before feminist intervention in that discussion made a femme fatale mandatory for the category. Seen now, it’s Fuller sui generis, making films that are like no others. Nearly always working with tiny budgets, Fuller always spent up big on cinematographers, in this case Joe MacDonald. Fuller and MacDonald build the film on two extremes: tight closeups lit for sharp facial modelling; and free, sometimes flamboyant camera movement.

Pickup is assembled from standard pulp fiction components: situations, stock characters, conventions, cliches, attitudes, images, gestures, actions, and relationships. Unlike later practitioners described as neo- or post- , Fuller’s work is at one with such material, not outside it. The film draws its energy from creating a world from within this pulp paradigm in all its crudity, brutality, sleaziness, and pure improbability (Fuller had a set built for Skip’s home: an abandoned bait shack built on piles ten meters out in the East River, reached by a wooden gangplank. Its refrigerator is a crate lowered by a rope into the river. Its only amenity is a hammock. Fuller gets full value out of the set, using every inch of it across several scenes–wonderful filmmaking. Living there, how does he keep his suits so perfectly pressed? Where’s the wardrobe? Does he cook? Why would a professional criminal choose a place with only one way in and out? Don’t ask).

At the center of all this, Fuller, MacDonald and Widmark create the Skip character: cocky, breezily insolent, violent, skilled, devoted, suspicious, held together with a luminous self-confidence. Widmark doesn’t get much better than this–nor does Fuller.