“It’s my idea,” said Ken Kesey while held in the visitation of a California jail in 1966, “that it’s time to graduate from what has been going on, to something else.”1 Kesey, who had demonstrated an inborn talent at tapping into the level beneath the level, could see the end of one thing in sight. Psychedelia was getting played out. An initial burst of influence, which had been energised in large part by Kesey and his crew, was coming to its nadir. Kesey, with his finger ever turned to the wind, knew this better than anyone.

If only ends and beginnings were so easy to read for the rest of us. It’s usually the very special sensualists, the few truly heterodox minds amongst us, who have the prescience to see movements on that scale. Glenn Frankel’s new book, Shooting Midnight Cowboy: Art, Sex, Loneliness, Liberation, and the Making of a Dark Classic, acts as a kind of treatise on what exactly delineates the end of one epoch and the beginning of another. Taking as its subject the context to, shooting of, and legacy around Midnight Cowboy (John Schlesinger, 1969), Frankel opens us onto a world wherein a collection of atypical minds, confronting a decidedly atypical social and artistic context, combined to create a film which contributed significantly to the reformation of Hollywood cinema. 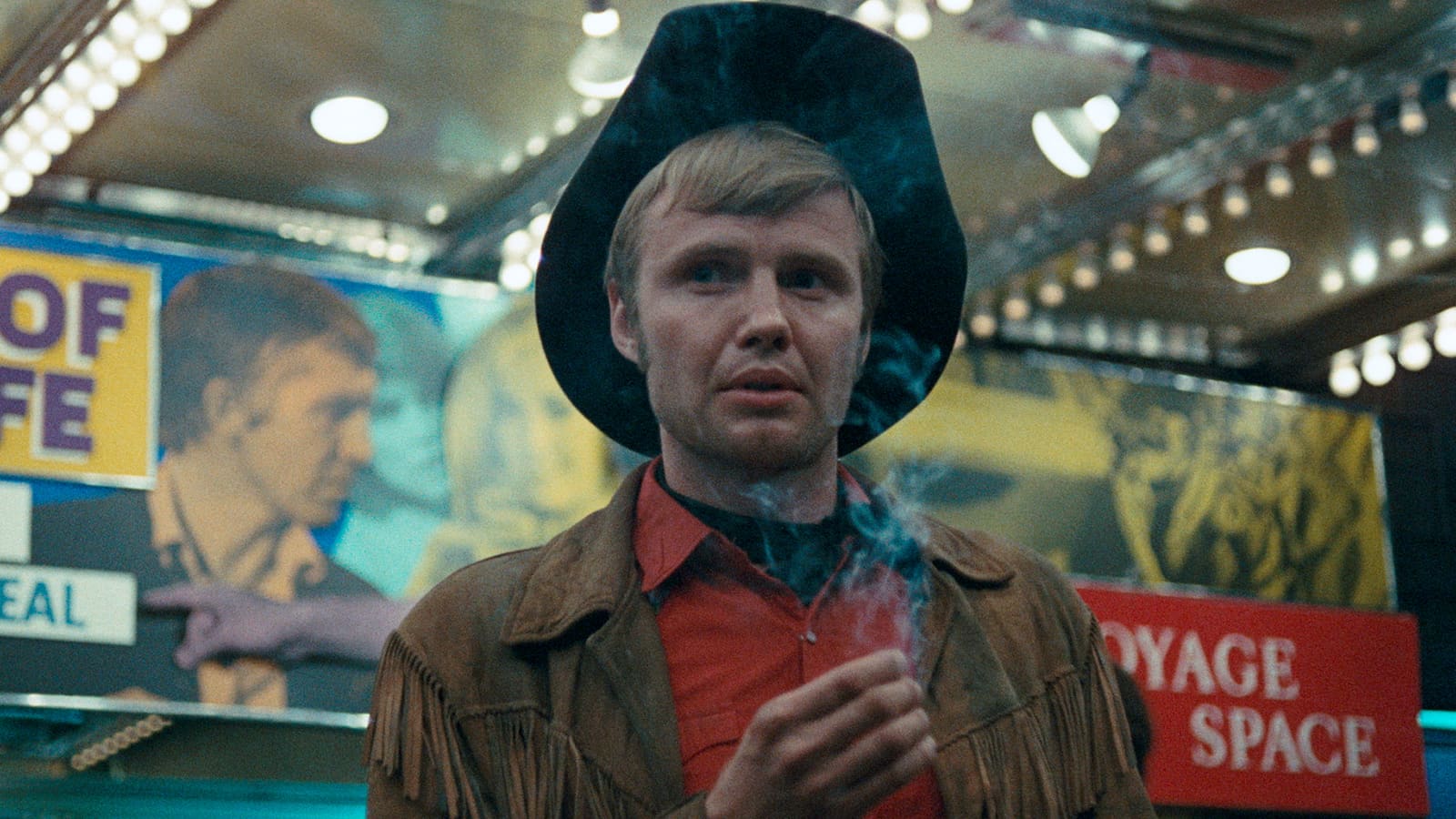 The book has two primary figures on which it focuses the bulk of its pages. One is John Schlesinger, the British director who was 43 by the film’s release and would never again command his talents so potently. Schlesinger’s inconspicuous upbringing as a closeted Jew had left him confused and, as his mother says, “feckless” (p. 25). No surprise, then, that he found himself so attracted to the “rude, crude, and materialistic cinema” of America, as opposed to the “cramped budgets and small thinking” back home (p. 28). His inherited outsider’s gaze, in concert with an artistic idiosyncrasy, left him well suited to the tackle the venereal, abject, morally fraught subject matter of Midnight Cowboy. “I don’t just make a film,” said Schlesinger. “I fuck a film, day and night.” (p. 28)

Which brings us to our second protagonist: James Leo Herlihy, a novelist, playwright, actor, and the author of the novel Midnight Cowboy (1965) which arrived on Schlesinger’s desk shortly after publication and was subsequently optioned by producer Jerome Hellman, at Schlesinger’s behest, in March 1966. Frankel’s recounting of the Herlihy life unearths several uncanny factoids – for example, that Herlihy performed at the Theatre Company in Boston in 1963, where Jon Voight and Dustin Hoffman, the stars of Midnight Cowboy, would later perform themselves. But Frankel fails to realise that Herlihy’s story is not nearly as dramatic nor captivating as Frankel’s attention would suggest. Far more depth ought to have been given to screenwriter Waldo Salt and producer Hellman, who, in their infrequent mentions, thoroughly intrigue.

The book also leans into the social history of a time when, as Jack Valenti says, “there were stirrings of insurrection at all levels of society” (p. 92). In particular, Frankel hones in on gay life in 1960s New York. While Schlesinger claimed that he did not want to make a “gay movie” (p. 115), Frankel insists on the topic, given Schlesinger and Herlihy were both gay. This means that he’s prone to play up the homosexual undertones to the film’s content. Yet, however exhaustively researched, these sections can feel unsatisfactory and overly neat, particularly if the reader has read Vito Russo’s The Celluloid Closet (Harper & Row, 1981), a book which, at times, it feels like Frankel is plagiarising.2

On matters of film history, Frankel is more decisive. For example, his examination of the unique position that United Artists held by 1968 is detailed and insightful. Because of their unorthodox approach, UA owned no real estate, no talent, no equipment, and no crews, opting instead to draw up contracts one movie at a time. When Old Hollywood studios found themselves tied down and burning cash, UA flourished, operating with a levity and artistic sensibility which granted filmmakers almost total freedom. Its only demand was a tight budget and final script approval. UA’s role in Shooting Midnight Cowboy is to play gloriously tolerant enabler to Schlesinger and Hellman’s vision of their new, controversial project, and while reading the book, I couldn’t help but wonder if today’s artistically frustrated climate is just waiting for another UA to roll around. 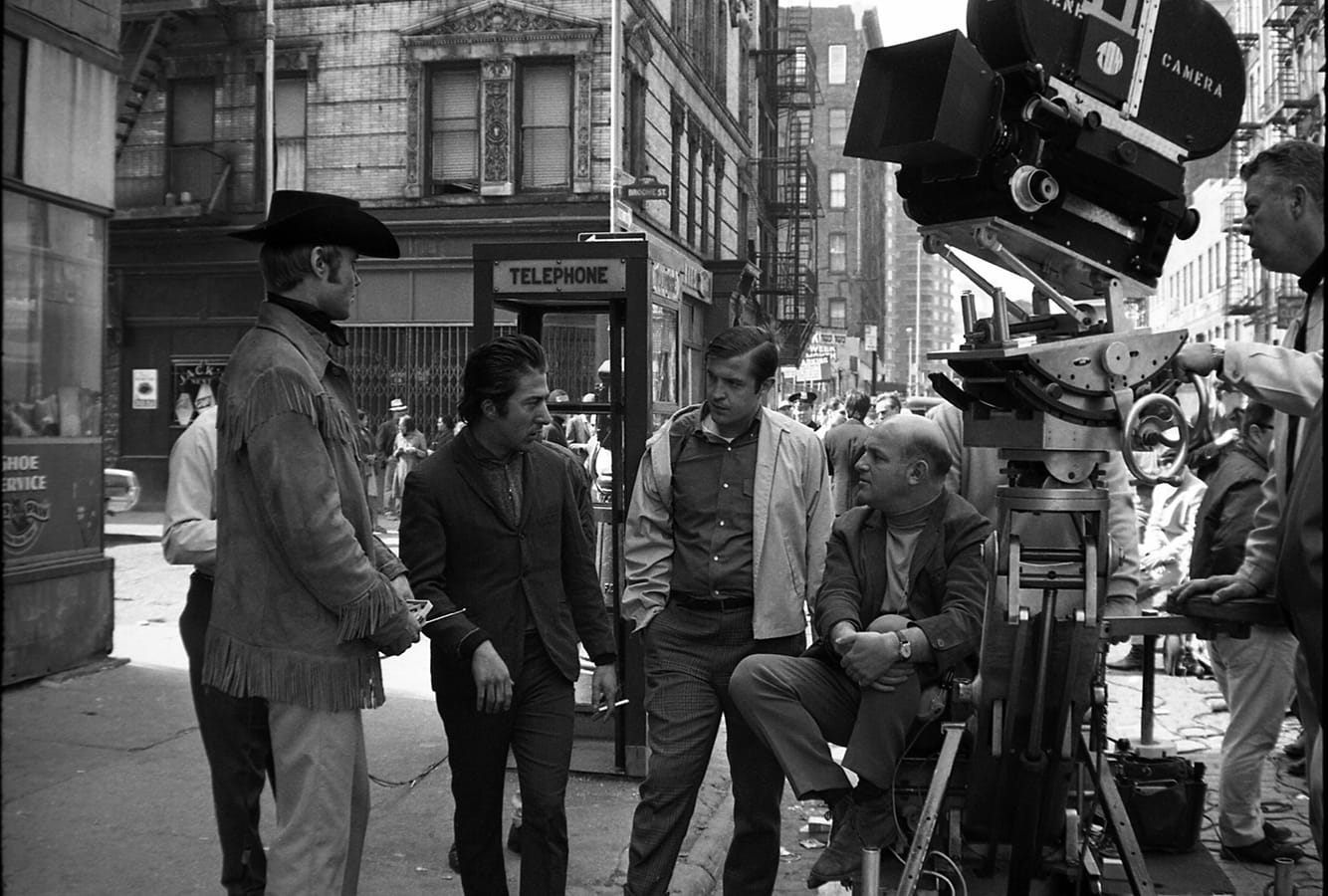 Behind the scenes of Midnight Cowboy

Given the aura surrounding Midnight Cowboy’s storied history, myth-busting is a major preoccupation of the book. Frankel excavates the origins of the book’s name (apparently thanks to Tennessee Williams), Hoffman’s “mythic version” of his early career in New York, the famous “I’m walkin’ here!” cab scene (supposedly improvised but actually appearing in a November 1967 draft of the script, a full six months before the scene was shot), as well as the “enduring myth” of the rating, which renders Midnight Cowboy still the only X-rated film in Oscars history to win Best Picture. These explanations are clever and slight, and Frankel’s voice never strains to emphasise them, even if he felt a certain self-consciousness about debunking the film’s glow: “It hasn’t always been easy,” Frankel acknowledges, “to separate reality from myth in writing about the making of Midnight Cowboy and the turbulent era it reflects.” (p. 339)

But the real star of the book, one whose myths remain well and truly intact, is New York City. With such rich material, it is here where Frankel, as a social historian, is at his best. His chapters on the state of New York in the mid-to-late 1960s are a fascinating and kaleidoscopic view of a fallen power. It’s a city of public transport worker walkouts, riots in Tompkins Square Park, rotting-out tenements, racial division, ghettoes, crime, unemployment, corruption. It’s a city where psychoanalysis is enjoying its “postwar heyday” and psychiatrists are revered like “the priesthood during the Middle Ages” (p.76). It’s a city of drugged-up murder, of “violent street crime, heroin and meth addiction, bad acid” (p. 188). And it’s a city which plays, according to James Sanders, “true mythic counterpart” to cinema (p. 7). Pauline Kael noted this with uncanny precision in a review of The French Connection (William Friedkin, 1971): “The city of New York has helped American movies grow up; it has also given movies a new spirit of nervous, anxious hopelessness, which is the true spirit of New York. The movies have captured the soul of this city in a way that goes beyond simple notions of realism.” (p. 153)

Frankel is immensely vivid in painting a picture of New York’s softly humming drudgery, especially along 42nd Street, which becomes the focus of Frankel’s attention just as it becomes a nexus for both Herlihy’s and Jon Voight’s Joe Buck. Once the milieu is established, there is an assemblage of characters which Frankel draws into this seedy fray; his approach is to hold a number of threads and try to crochet them into a kind of multicoloured fabric. Ann Roth, the revolutionary costume designer whose influence of cinematic costume is still felt today, is one such character; another is cinematographer Adam Holender, a Polish immigrant who had come to New York after fleeing Nazi-held Kraków. 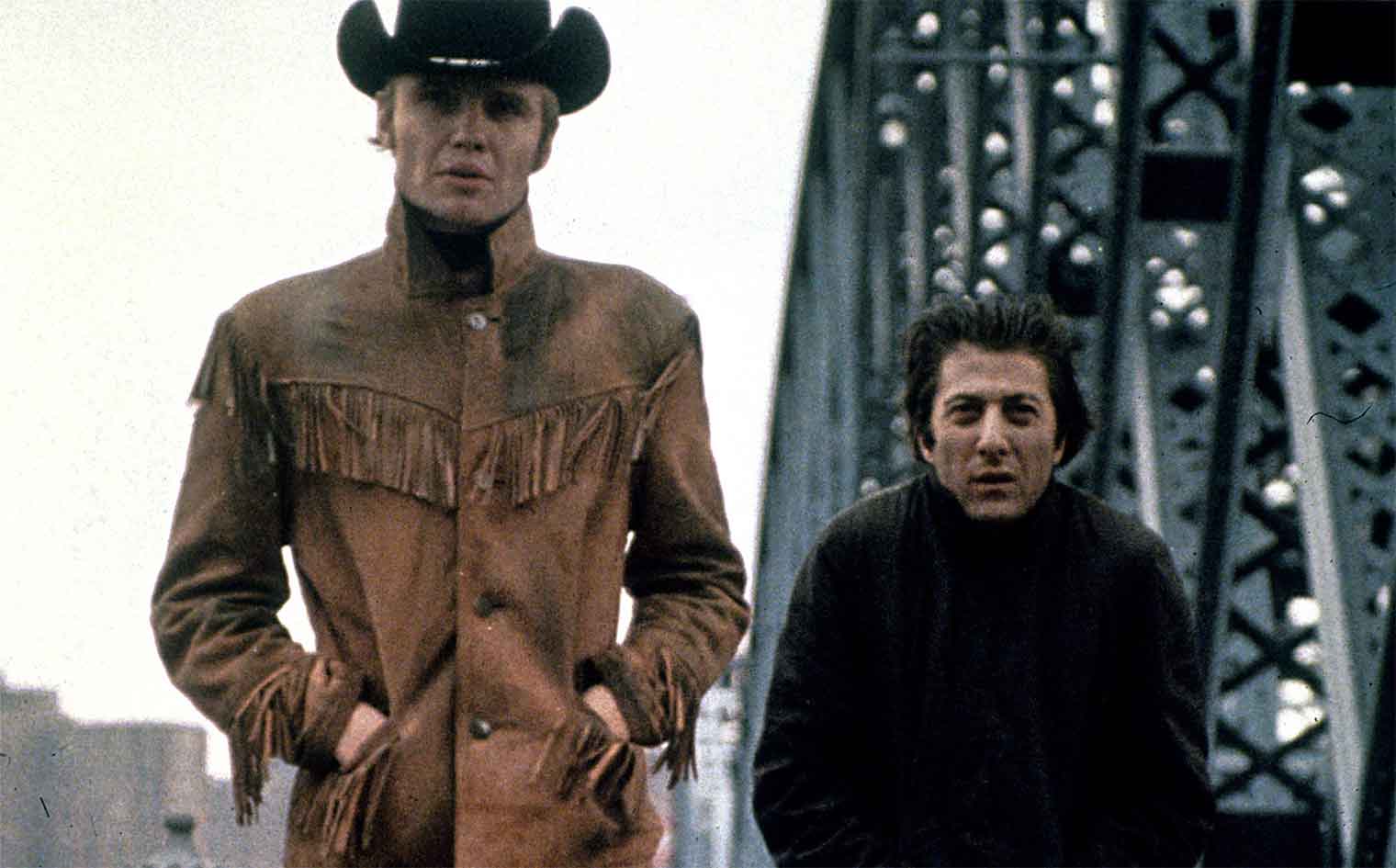 But it is when he tries to remain faithful to all of his characters that Frankel, like a dogwalker holding too many leashes, can tend to lose his grip on the story. This rears its head most conspicuously in a temporal sense; the book’s timelines frequently become unclear. I found myself thinking often of Peter Biskind’s seminal book Easy Riders, Raging Bulls, which weaves a story many times more complex than Frankel’s while never dropping a thread.3 A part of the issue is that, where Biskind’s aim is strictly historical, Frankel is trying to do more. The book’s subtitle labels Midnight Cowboy a “dark classic,” but Frankel, while accurately laying out the great figures behind the film’s production, can never really unlock what exactly makes it a classic. He can only draw out what makes it dark, and this does not require a book to do.

One is also prone to think of the voice in Biskind’s book – gossipy, casual, slippery and cool and catchy, crackling and rolling like melted ice. By contrast, Frankel’s voice is utterly bereft of character. While critics have praised the accessibility and clarity of the prose,4 it is invariably lacking in a special something. Unfortunately, Frankel’s is yet another submission into the aesthetic of readability which has slowly subsumed general-interest nonfiction writing in the last 40 years – Sam Wasson’s book on Chinatown, The Big Goodbye, was also plagued by this same problem.5

What becomes clear by the end of Shooting Midnight Cowboy is that, while a gifted and pellucid social historian, Frankel is not much of an art critic. The deepest level on which he can see any film is a quasi-allegorical one, and even that is a stretch. “These hardened New Yorkers,” he writes in analysis of the film, “strip Joe of everything he owns: his money, his precious cowhide suitcase, his transistor radio, his cherished illusions, his fragile self-respect” (p. 273). But the film is important, and still holds up beautifully, because it is doing so much more than what Frankel is able to see. The Warhol-style party scene, for example, is an engrossing, weird, and unexpectedly experimental piece of New Hollywood filmmaking and editing. But Frankel views the sequence with a kind of anti-underground scorn, a mainstream superciliousness, and thus writes, misguidedly, that it “never captures our imagination” (p. 278). Instead, Frankel prefers the “fresh ocean breeze [and] respite” of the Florida scenes which, upon rewatching the film, struck me as overly polished, too sterile, and way too Hollywood (p. 231). 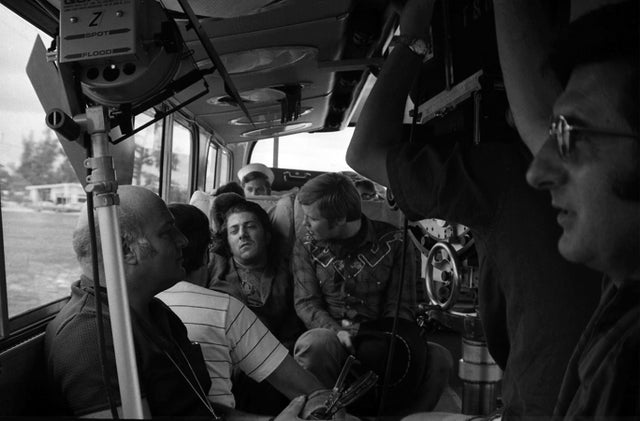 Behind the scenes of Midnight Cowboy

Indeed, the experience of watching the film anew was revelatory. I was floored by its formal innovations, its rugged beauty, the truth of its performances, the truth of its construction, Brenda Vaccaro. It reminded me of the Luis Buñuel quote, when asked why he made movies: “To show that this is not the best of all possible worlds.”6 But most of all, Midnight Cowboy felt like a nourishing antidote to the hollow slickness of contemporary Hollywood cinema. And when I read that 60 million Americans watched Midnight Cowboy win Best Picture before hearing Bob Hope close the ceremony with the remark that “Hollywood peddles not only dreams but truths”, I understood, with a bewildering force, just how different the contexts are. Or perhaps not, for cries of renewal sounded in the 1960s just as they do now. In 1962, playwright Clifford Odets had said: “Hollywood is no better or worse than the rest of the country. The whole country has become a cuddle-bunny. It’s not just Hollywood. Maybe there’ll be a new kind of moral vigor, a reversal of the so-called values by which American people live today.”7 Midnight Cowboy was the logical conclusion of Odets’s remark. It came at a time when cinema was expected to reinvent itself, to turn moral vigour into stylistic daring. It was a time for demolishing rules.

But these rules were not only moral; they were aesthetic too. And while captivated by cinematic history, Frankel is uninterested in cinematic artistry. This perhaps explains why, though supposedly about the film’s “shooting”, the actual shoot takes up only 32 of the book’s 336 pages. Frankel’s skill in constructing histories renders the book absolutely recommendable for cinema buffs, amateur film historians, old revolutionaries, and Warholites. But he would have done well to dig deeper into the sensibilities and philosophies demonstrated in Midnight Cowboy, which would find their apotheosis in the later films of New Hollywood. Or perhaps this is asking too much – after all, there is no evidence that Frankel is the kind of cinephile who fucks a film, day and night.