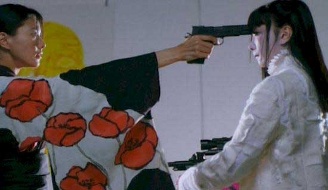 Dogs follow their masters, but I am a stray cat.

In the opening of Pistol Opera, a hitman fires a gun directly into the face of the audience. As an answering shot rings out, he falls off a roof and dies – dangling by a cord in mid-air – a blissful smile wreathing his face. His killer, a black-clad punk with a shock of angel-white hair, races into the street below. Driving off in his escape car, he stares back at us through his rear window. Daring us, perhaps, not to be dazzled, shocked and thrilled…

Seijun Suzuki, the veteran director of countless yakuza thrillers, begins Pistol Opera much as he means to go on. Consciously or not, that opening echoes the famous closing shot of The Great Train Robbery (Edwin S. Porter, 1903) – widely (and wrongly) credited as the first-ever narrative film. In a career spanning over 60 years, Suzuki has worked hard to return the cinema to its primal roots. A poet of pure sensation and conscious illusion, he deals (much as Georges Méliès did in the early years of the medium) in hypnotic and hyperbolic images that do more than compel our attention – they openly and loudly demand it.

Few directors have gone as far as Suzuki in demolishing the “closed romantic realism” identified by Mark Cousins and beloved by mainstream audiences (and mainstream producers) over most of the past 100 years. He has rebelled constantly against the compulsion “to create worlds that do not acknowledge that they are being watched”, where “the actors behave as if the camera isn’t there” (1). Every object, every gesture and every image in a Suzuki film is there overtly to be watched and exists – gloriously and without apology – for the camera’s watchful eye. His is a cinema of the image, by the image, for the image… and every shot is equivalent to a gun in the face.

It was not, of course, always so. Born in 1923, Suzuki began as an assistant director in 1948, at a time when the great classical humanists of Japanese cinema (Yasujiro Ozu, Mikio Naruse, Kenji Mizoguchi) still held sway. Joining the Nikkatsu studio in 1954, he churned out a slew of popular gangster, samurai and sex melodramas over the next 15 years. Today, watching Nikutai no mon/Gate of Flesh (1964), Hana to doto/The Flowers and the Angry Waves (1964) or Tôkyô nagaremono/Tokyo Drifter (1966) one feels an ongoing tension between Nikkatsu’s demand for a commercially palatable narrative and Suzuki’s quest (aided and abetted by his designer, Takeo Kimura) for a “pure” cinema of camera, colour and form.

Unsatisfactory in terms of storytelling, Suzuki’s work of the ’60s is a glorious celebration of image for its own sake – as an objet d’art existing by and for itself. As the visuals become more florid and extreme, the narratives become increasingly fragmented and hard to follow. It is clear that Suzuki is blazing his own trail, working towards a vision that is uniquely his own – but it is hard, at this early stage, to figure out what that might be. What emerges most clearly from these films (in the words of Tony Rayns) is “a wilful and purposive reduction of narrative to its barest essentials, suggesting an impatience with conventional narrative structures” (2).

Suzuki’s impatience boiled over in 1967, with the film that may well be his masterpiece – Branded to Kill. Working from a pulp yakuza plot, Suzuki abandoned linear narrative for a maze of hypnotic dream imagery. A deconstruction of the gangster movie to rank alongside Jean-Pierre Melville’s Le Samouraï (made that same year), this is as flamboyant and baroque as the French film is minimalist and restrained. A box office fiasco, Koroshi no rakuin/Branded to Kill got its director fired from Nikkatsu (for the crime of making “incomprehensible” films, reportedly) and made him unemployable for a decade after its release.

A conscious follow-up to the 1967 film (its working title was Branded to Kill – Part Two), Suzuki’s still-more-outré Pistol Opera continues his gleeful assault on the yakuza genre – combining it with the febrile colours and lurid eroticism of his “comeback” “Taisho” trilogy of the 1980s. This trio of lush period dramas (Zigeunerweisen [1980], Kagero-za [1982] and Yumeji [1991]) allowed Suzuki to further his experiments in colour and form while indulging his taste for the more offbeat side of human sexual desire. Rejected initially as uncommercial (for example, no cinema in Japan would show Zigeunerweisen, forcing Suzuki to exhibit it himself in a giant tent) this trilogy is now the object of a small but vociferous cult.

Shot after a further ten years of enforced inactivity, Pistol Opera is the culmination of everything Suzuki had done up to that point. Its lone yakuza hitman is (this time around) a lone yakuza hit-woman named Stray Cat (Makiko Esumi), whose angelic face and doll-like demeanour make the callous savagery of her profession all the more chilling. Rejecting the lesbian advances of her icily glamorous boss (Sayoko Yamaguchi), she embarks on a quest for a renegade killer called Hundred Eyes. This unknown assassin has stolen a complete list of the company’s agents – and is now leaving them dead, one by one, with a smile on their face

In their random brutality and campy Pop Art visuals, the early scenes may remind you of Elio Petri’s 1965 kitsch classic The Tenth Victim/La decima vittima, where everybody is hunting everybody and it scarcely seems to matter who winds up dead. Yet the tone of the story soon turns darker (even as its colours remain blindingly bright, as if Vincente Minnelli or Jacques Demy had taken to shooting Japanese gangster movies in their old age). Stray Cat is haunted, at each stage in her adventures, by a little girl (Hanae Kan) who might just be a younger and more innocent incarnation of herself. The child begs her constantly to “teach me how to kill too” – but that is the one crime Stray Cat refuses to commit.

As it progresses, Stray Cat’s journey takes on the nature of an Orphic quest – in which she is both the lovelorn hero and Eurydice, his lost bride. Twice she descends into a vibrant Technicolor hell, where the spirits of the dead (her victims and her would-be killers, all swathed in funereal white) drift about on a river of dazzling molten gold. Her final showdown with Hundred Eyes – whose true identity will surprise nobody who has seen a yakuza film before, and very few who have not – takes place inside an infernal Exhibition of Terror, decked out in nightmare images by Francesco Goya and Hieronymus Bosch and haunted by white-painted bhuto demons.

Any symbolism at work here – and whether it is to be taken seriously or tongue-in-cheek – must play second fiddle to Suzuki’s rhapsodic flow of images. These come pouring down upon us, like the crimson petals emptied by a bulldozer (at one memorable moment) onto a field of blood-red poppies. They haunt the memory long after the “plot” of Pistol Opera has faded away to nothing (i.e. around five minutes after the closing credits). A gun emerging from a swimming pool, and shooting a diver in mid-air…two killers doing battle in a bamboo forest, swathed in sulphurous yellow smoke… an angelic child mutating into a scarlet geisha doll. As a retired hitman tells Stray Cat early on: “We make the impossible possible, and turn it into art”.