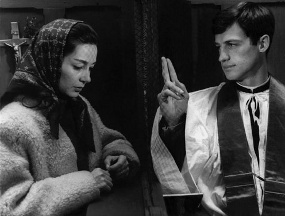 This annotation previously appeared in Senses of Cinema, no. 10, November 2000.

A selected filmography for producer Carlo Ponti is at the tail of this article.

It may be the business of other film-makers to discuss the big questions; personally, though I don’t mind touching on them, I have no wish to explore them. (1)

Tom Milne has suggested that the key themes of Melville’s work are the “impossibility of love, of friendship, of communication, of self-respect, of life itself.” (2) In concordance with the statement from Melville cited above, Milne’s ‘thematic’ reading gets us some way towards understanding and ‘capturing’ the sensibility of the director’s work, but it does not come near to suggesting the range of this work, nor the gentle, stoic melancholy (with bursts of often stylised brutality) that best defines the emotional state of many of Melville’s characters. Melville’s suggestion that his work only touches upon the “big questions” is misleading, and undervalues the emphasis his films place on the observational detail of everyday life, the specificity of a particular time and place, and the ritual actions and movements of bodies placed in specified contexts – all of which are “big questions” for the cinema. His statement is also misleading because it does not recognise how such elements or qualities can be synthesised to produce profound dissertations on the kinds of questions he suggests his films shy away from. It is the indirectness of Melville’s approach, combined with the intensely studied emphasis he places on significant – or ‘insignificant’ – gestures, actions, elements of mise en scène and stylistic devices (such as fades, close-ups and precisely deployed camera movement) that most commonly leads to such readings of his work. Melville’s films have the precision of a scalpel and the intensity of full-blown melodrama without being defined or ‘restrained’ by the coolness and histrionics of either.

Léon Morin, Prêtre is often regarded as the first film of Melville’s maturity, symbolising a break from the low-budget aesthetics and the free-wheeling stylistic experimentation of works such Le silence de la mer (1947) and Bob le flambeur (1955); a self-conscious ‘rejection’ also of the nouvelle vague which had spread out in Melville’s wake. Surface evidence backs up such claims, as Léon Morin, Prêtre features by this time established stars, Jean-Paul Belmondo and Emmanuelle Riva, in its central roles (though both are also associated with key works of the nouvelle vague), and follows more closely the general thematic and stylistic parameters of European art cinema of the period. Looking back on this film almost forty years later, it is much more difficult to recognise how it separates itself from Melville’s earlier work – other than through its obviously more expensive budget – and even some works of the nouvelle vague (of which Melville was only ever a progenitor, never a member). To be found intact are the powers of observation that Melville always brings to bare on a particular time and place, and the subject of an evolving friendship that emerges between two characters seemingly incompatible in terms of life choices, political allegiances and moral perspectives (of course things are always more complicated than such dichotomies suggest).

It is now more productive to place this film alongside Melville’s two other films of the Occupation, Le silence de la mer and L’Armee des Ombres (1969), and celebrate the extraordinary tapestry of war-time life they grant testimony to. All three of these films are adaptations of celebrated French novels of the Occupation, but within this rough ‘trilogy’ Léon Morin, Prêtre stands out, its perspective on events significantly different to the overt themes of resistance found in the other two works. Due to the intensity of the relationship that develops between the priest (Belmondo) and his unbelieving parishioner (Riva), and the focus Melville places upon it, the details of Occupation life and broader events such as the Liberation, almost seem to de occurring in the background, secondary to the moral, theological and existential questions that preoccupy the central characters (typical of Melville this conflict is often played out through the smallest of gestures, such as the Belmondo brushing the face of Riva with his cassock). In its centring upon spare interior spaces, an impossible romance (between characters who obviously ‘love’ one another) and the milieu of small town life, this film has much in common with Le silence de la mer. It also shares that film’s extraordinary use of voiceover – at times interior monologue, at others commenting on the action, the broader historical events or a small detail of everyday life – and expressive sound (though this is much subtler in Léon Morin, Prêtre, adding to an ambience that is essentially tonal).

My description of the film may suggest that it is preoccupied by the tortuous relationship that develops between the two central characters, and the frustration of its lack of physical consummation. And although it is, Léon Morin, Prêtre is also a much more complex, ambitious and ambiguous film than this suggests. First, this is predominantly a portrait of life under German Occupation and much of its energy is devoted to the observation (or just glimpsing or ‘flashing’) of the specificity of this event: the varied interactions between occupier and occupied, the gradually emerging implications of deportation, the changing faces of ‘occupying’ Italian, German and American soldiers, the sexual frustrations and fantasies of the almost exclusively female population. It is the last of these aspects that provides some of the film’s most fascinating detail (such as Riva’s confession of her love for her female workmate). This of course also sets the scene for Belmondo’s appearance (some way into the film) and the sexual fantasies that are projected onto him. Typically, for Melville, Belmondo’s character is unwavering in his commitment to a particular moral code (even if his means are often unconventional), using his sexual magnetism to draw women to the church while never really swaying in his devotion to his vows and ecclesiastical purpose. Melville’s characters rarely change or transform – they have an understanding of the world and their place within it – but the relationships between them and their milieu evolve gradually through a process of acceptance and dawning mutuality. Thus, the relationship explored in this film evolves into that which is most sublime and doomed in Melville’s cinema, friendship.

The style of Léon Morin, Prêtre is spare and economical. The soft greys and coolness of the generally muted black and white colour scheme, brilliantly expressing the limited and often uneventful life of the German Occupation. The camera lingers on cold and damp rooms and regularly situates characters looking out into empty or sparsely ‘occupied’ nooks and crannies. Despite the turmoil of the world which surrounds the characters – including the ever-present threat of deportation, the absence of men other than occupying soldiers – it is the regularity of life that is the focus of the film. The ‘resistance’ the film focuses upon is found in the moral and theological battle (though on the surface seldom more than a gentle parry and thrust) that is waged between Riva and Belmondo. Everything else takes a back seat and thus the big events of the War seem to occur elsewhere, only intermittently touching the more central concerns of human will, desire, conversions and moral codes. This may make Léon Morin, Prêtre sound like an overly pious and inappropriately inter-personal film, but its concerns are equally secular, centring on the strength of the characters’ moral commitments and worldviews. The conversion which takes place in this film is extremely ambiguous, virtually unreadable, as it is uncertain whether Riva has been seduced by the man or god in Belmondo’s priest. For his part, Belmondo relies upon this confusion, hearing the confession of a string of young women whose motives for visiting him are less than clear (though often very clear).

In the end, Léon Morin, Prêtre is a film about belief, for both the characters and the audience. It is also a film about being in and experiencing the world, of finding life (and friendship) in even the most difficult circumstances. Some of the film’s most fascinating scenes revolve around oblique discussions of the theological arguments of the books that Belmondo lends to Riva to both encourage and chasten her inquiry (she basically has communist sympathies). Yet, Belmondo’s instructions in reading these books are more revealing than the content of the books themselves. After devouring one of his books in an effort to illustrate her enthusiasm and passion for the project he has set her (and perhaps ‘project’ her enthusiasm for more ‘secular’ possibilities), Belmondo chastises her for reading the book too quickly. This example neatly summarises two of the key concerns and lessons of Melville’s cinema. First, that the substance of the film lies in the observation of detail, of life at a particular time and in a specific place. Second, that the key concerns of the film are with the rigor of any character’s attitude to being in the world, the moral, experiential and ritual codes that make sense of their actions (and life). This code is attached to all of Melville’s central characters, granting their actions and attitudes a “sort of purity”, whether gangster, assassin, German officer, Resistance fighter, communist sympathiser, or priest. As is said of the brutal figure of Gu in Le Deuxième Souffle: “He is a danger to society, but he has preserved a sort of purity.” (3) The above example is also a missive to the audience, a form of instruction that specifies the ways in which Léon Morin, Prêtre itself should be viewed.