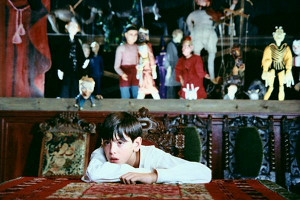 Ghosts haunt Alexander in Ingmar Bergman’s Fanny and Alexander as surely as two plays, Shakespeare’s Hamlet and Strindberg’s A Dream Play, haunt the film. This intertextual reference to the two plays highlights the world of mothers and the world of fathers that underscore the film’s deepest thematic structure: hope and possibilities. The world of fathers as exemplified by Oscar Ekdahl (Allan Edwall) and the Bishop Edvard Vergérus (Jan Malmsjö) is ineffectual and authoritarian while the world of mothers as represented by the grandmother’s (Gunn Wållgren) house is warm, life-affirming, and full of possibilities. The opposition of these two worlds structures the two halves of the film. However, both the world of the mothers and that of the fathers face a challenge from the imagination of Alexander (Bertil Guve). Thus, he can be seen to be the Jungian child archetype placed at the heart of the film.

As Jung points out in The Archetypes and the Collective Unconscious: “It is a striking paradox in all child myths that the ‘child’ is on the one hand delivered helpless into the power of terrible enemies and in continual danger of extinction, while on the other he possesses powers far exceeding those of ordinary humanity” (1). Even though he confronts a dreadful enemy in the form of his stepfather, Alexander finds the means to overcome and defeat this adversary. His imagination fuels his victory. Consider the power of Alexander’s imagination. When we see him at the film’s opening, he is playing with a Christmas diorama that morphs into a real Yuletide production with Alexander portraying an angel. Throughout the film, reality melds quite easily into fiction and vice-versa. The strength of the film rests in its ability to move so readily between worlds.

During the first half of Fanny and Alexander, Alexander inhabits the mother’s world where the father figure, Oscar, is inept at best and incompetent at worst. Oscar’s sentimental curtain speech reveals his inadequacies both as an actor and a father. He simply bungles the job. Later, while performing the ghost in Hamlet, Oscar suffers a stroke. Although Alexander’s family encourages him to come to his father’s bedside, he hesitates. As the family sees it, fear rules Alexander’s actions. While fear may play a part in Alexander’s response, so must his rejection of the unimpressive world of the fathers. Contemplate his role models. First, his father is somewhat sentimental while his Uncle Carl’s (Börje Ahlstedt) main ability in life consists of extinguishing candles with his flatulence. Second, his Uncle Gustav (Jarl Kulle) suffers from premature ejaculation. None of these men offer an acceptable model to follow. The one strong and possible role model, Isak (Erland Josephson), does not truly enter Alexander’s life until the second half of the film, and thus, cannot be said to truly occupy the world of fathers.

Furthermore, after his father’s death and his mother’s remarriage to Edvard Vergerus, Alexander enters the domain of the Jungian “terrible enemy”. Bleakness dominates the Bishop’s chancery, and during his time there, Alexander suffers in this harsh environment. The Bishop brutalises the child in an attempt to crush his spirit. Alexander relates a ghost story to his sister and a maid. The story centres on the first wife accusing Edvard of murdering her and their children. Edvard confronts Alexander about the story, and when Alexander denies having told the tale, Edvard forces him to swear so on a Bible. After cajoling a confession from Alexander, Edvard whips him and locks him in the attic. Although these actions illustrate Alexander’s role as the child archetype, they also emphasise the connection that Fanny and Alexander has to Hamlet. Much like King Claudius, Hamlet’s uncle who killed his brother to gain power, Edvard operates as an adversary to Alexander. The children even call their stepfather Uncle Edvard as if to further accentuate the relationship between the two works. Edvard and Alexander’s adversarial relationship is at least as dangerous to Alexander as Hamlet’s is to Claudius. However, unlike Gertrude (Hamlet’s mother), Emilie (Ewa Fröling) succeeds in rescuing her children.

On a visit to her former mother-in-law’s summerhouse, Emilie confesses the terrible mistake she made in marrying the Bishop. She also reveals that she is pregnant and cannot escape the house with her children. Helena, whose name (in Greek) suggests the light associated with the sphere of the mothers, sends help in the form of her lover Isak. Isak helps the children to escape by hiding them in a trunk. The trunk represents a magical world, an idea that is reinforced when the children arrive at Isak’s home. There they meet his nephew Aron, the puppetmaster. It is in his interactions with Aron that Alexander reveals his powers. After tiptoeing around the house at night looking for the toilet, Alexander hears a key unlocking a door. From behind the door, Alexander hears the voice of God. In terror he hides under a table only to find out that Aron has been manipulating a puppet he has been working on for a client.

Aron takes Alexander into the room of his brother Ismael. Here all the strange powers of the child archetype reveal themselves. We see into the chancery where Emilie has just given Edvard broth laced with sleeping tablets. As Ismael holds Alexander and helps him to focus his thoughts, we see Edvard’s invalid aunt set the house on fire. Edvard suffers severe burns from the fire that are nonetheless brought on by the destructive power of the suppressed feminine in the chancery. Thus, the fire imagery of the grandmother’s house and its association with the Yule festival becomes a purging force in the chancery – an idea alluded to in the reference to Strindberg’s A Dream Play and its lead character Agnes.

For the above reasons, it is possible to see how Bergman incorporates the archetype of the child into Fanny and Alexander. Bergman intensifies the use of the archetype by placing it in opposition to the mother’s sphere as well as to the father’s. At the heart of the father’s world the dark and brooding world exemplified by Hamlet exists. However, the sense of purity and possibility represented by A Dream Play serves to express the mother’s world. The film suggests that it is in the place between these two spheres that the child archetype must find its strength.