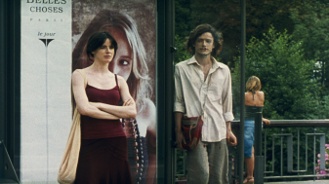 A film of seemingly austere means but voluptuous effect, Jose Luis Guerín’s In the City of Sylvia (En la ciudad de Sylvie/Dans la ville de Sylvie) is predicated on the simplest of human gestures – casting a glance – and pursues it to a point of pure, revelatory essence. At the stark core of the film’s latent narrative is a simple memory, possibly irretrievable, of a beloved’s face. For the lover, a romantic dreamer, the beauty of a face and the enigma of a stranger are reciprocally entwined, forging an economy of desire that takes gazing, and subsequently a lot of walking, as its currency.

Legible to a degree of practical transparency, In the City of Sylvia belies its precise formal construction and densely allusive texture, features that have come to define Guerín’s masterful, if belatedly acknowledged, oeuvre to date. It could be said that Guerín’s unclassifiable style is at once avant garde and old-fashioned, or rather that he has, almost without peer, channeled the intrinsically transgressive properties of cinema’s beginnings and applied them to modern social realities. As such, In the City of Sylvia posits the sympathetic fate of its dreamer as inseparable from the definitive drive of cinema itself: both entail the hazards and pleasures of looking as a means of shoring a sense of identity, solidifying the subjective self. Through the cryptic and playful schema of the search for lost love (or, crucially, a simulation thereof), In the City of Sylvia endeavors to recover the mystery of desire from the abuses of the overtly motivated characters who populate dominant cinema, and from introspective dreamers “exiled from all gregarity” (1). Guerín’s methodology provokes both the dreamer, and by implication the audience, into renewed states of participation through an enactment of desire that yields and asserts itself according to its object. Guerín’s mise en scène becomes a mirror of the spectator’s imaginative projection.

That In the City of Sylvia is virtually without dialogue, and unfolds more by spatial and temporal advances than dramatic proceedings, testifies to Guerín’s faith in characterisation free of psychological context. The film takes place in an unnamed European city, site specific in its adherence to cobbled lanes, cafe terraces, tramlines, and chiming cathedrals, while its anonymity suggests historical relativity (and situates the Catalan director beyond “nationalistic” identities of cinema). Apropos of its title, the city in question is anything if not of Sylvia, though it is in reality Strasbourg, a city whose ties with Goethe suggest that the film’s protagonist – artist, lover, dreamer – is cut from the same blue cloth as Young Werther (2).

I take a seat alone, in a café […]. I feel that I am sought after, surrounded, flattered. But the other is absent; I invoke the other inwardly to keep me on the brink of this mundane complacency, a temptation. I appeal to the other’s “truth”(the truth of which the other gives me the sensation) against the hysteria of seduction into which I feel myself slipping. I make the other’s absence responsible for my worldliness: I invoke… the other’s return: let the other appear, take me away […] from this wordly brilliance.

The film opens not unto a city but a hotel room, its walls cast in gauzy shadow, as the archetypically unnamed artist, a young man with long hair and sharp eyes, sits upright in bed, sketching raptly in a notebook. In the film’s tripartite chaptering, this is Night One, and very little is disclosed save for a shot of a coaster on the nightstand, inscribed with the name and directions of a bar, Les Aviateurs. It is only gradually revealed that it was at this location, six years prior, that the itinerant but indelible encounter with Sylvia occurred. Only retroactively can we infer that the young artist, setting out upon the city, is embarking on a quest. Ritually occupying a seat at an outdoor cafe, with a generous view of its inhabitants, the artist sets his gaze on a succession of faces, mostly female, mainly gorgeous. Idle in deed save for the inchoate portraits sketched in pencil, the would-be voyeur appears restless in his curiosity, matched by Guerín’s editorial and compositional acumen (4), in which faces appear, are partially obscured, and increasingly coalesce or clash within a collapsed optical plane of vision, assumptively that of the artist. The effect is one of escalating voyeurism that shades into delusion or is repelled by objective force. In either case, it is as if the artist’s gaze might, by assemblage, summon the seemingly irrecoverable face of a woman known only as Sylvia.

Is is not every day that you encounter what is so constituted as to give you precisely the image of your desire.

Randomly, and with the uncanny force of a surrealist apparition, a face appears, refracted in the cafe window. Is it her? No sooner has she elicited an overwhelming response in him than she disappears spectrally into the labyrinth of city streets. He, rather vertiginously, takes pursuit, a stalking that introduces the film’s second, protracted movement and finds Guerín’s mise en scène locked in an architectural tango, a beguiling sequence of tracking shots, pans, and reversals in which Sylvia becomes intractably enmeshed in the city’s very fabric. Where once the dreamer was idle, and the dream static, he is now called to action and subjected to contingencies beyond his control. As his drama appears to become more exigent, the recognition of a parallel and simultaneous world – call it the real – encroaches, unfolding on the outskirts of the screen but ignored at a certain cost. “A dialectic opens up between the dreamer seeing and seeing the dreamer” Guerín has stated (6), effectively defining the dual tendencies at work in the film, those of control counter to chance, fiction to documentary, the natural to the conceptual. Guerín synthesises – or rather sustains the tension between – these dichotomies, quite imperceptibly, such that readings of In the City of Sylvia have varied from possible love story, to cautionary tale of unfulfillment, to male fantasy.

In his indispensable companion piece Unas fotos en la ciudad de sylvia (Some Photos in the City of Sylvia, 2007), a digital video work consisting of still photographs in a silent montage, an instructive phrase prefigures In the City of Sylvia’s play of absence and presence and offers a Guerín-esque idea of egality within the frame: “When the figure disappears the surroundings appear.” The visibility of people, particularly the immigrants in this prototypical European city, those beyond the self-interest of the romantic and perhaps the audience too, is called into question by the inclusion of the ubiquitous, albeit cliched, figures of the Pakistani flower vendor, the African watch-and-trinket seller, the Romanian musician, each of whom repeatedly roams the frame in Sylvia’s city as well. If Guerín’s attempt to reflect the increasingly mixed ethnic and political climate of Europe feels nominal at best, skepticism is still cast on the extent of the dreamer’s own participation in the moment. Whether purely engaged or woefully oblivious in his pursuit, the dreamer is forced to recognise other people along the way. And just as Sylvia proves elusive, so too do the simpler pleasures of wandering the city unperturbed by love, among them the taste of freshly picked cherries offered by a farmer.

Guerín finds an ideal vehicle for a more provisional mise en scène (as well as convenient homage to F. W. Murnau’s Sunrise: A Song of Two Humans [1927]) in the form of the city’s ever-present tram, on which the enchanted but beleaguered dreamer is confronted with the limits of his sentimental destiny. Could such an arduous journey be nothing more than a terrible mistake? The film appears to annoint the dreamer’s ill-fated encounter with the oddest of advancements, some 40 minutes into the film: actual dialogue. In a virtually silent film teeming with so much sound, the grain of the voice is rendered strange indeed. Guerín has created an essentially “acousmatic” soundtrack (7), materially exaggerated as in Robert Bresson, derived from quotidien sources: high heels on pavement, weeping violins, moving trams, clinking glasses, passing cars, and muffled voices. The city symphony conveys a sense of reality engendered by autonomous forces, although the clink of an empty bottle tipped on cobblestones might just conjure loneliness in the wake of unrequited love. In the absence of the unattainable woman, the city recedes back to an empire of disenchanting signs, audible and visible traces that cast the dreamer back into the melancholy of his untenable position (which nonetheless includes a fortuitous one-night stand after a night in the bar).

An empty page, a blank screen, a woman seen, inscrutable, her hair tossed like a windswept crown: all of these become symbolic of a certain unknowability, of ineffable states expressed by other means of inscription, based in the imaginative powers of simple observation. For all its unabashed romantic sentiment, not least in its casting of beautiful actors, In the City of Sylvia is rather suspect of love’s illusions. Paranoia is never far from being on the heels of passion, and not for nothing does Guerín’s film ultimately recall Hitchock, and the dreamer most resemble Vertigo’s (1958) examplar of delusion, Scottie (James Stewart). Guerín discreetly namechecks a history of l’amour fou: Werther’s Charlotte; Dante and his Beatrice; Petrarch and his Laura (at least somewhat discreetly – “Laure je t’aime” is graffitied throughout the medieval city). The very name Sylvie invokes Gerard de Nerval’s eponymous novel and muse; the film’s finale fades to what Baudelaire described as “Some blue and pink evening […] heavy with farewells” (8).

In the City of Sylvia, however well-informed in its reflexive content, can’t evade the fundamental polemic put forth by theorist Laura Mulvey that describes the disparity encoded within narrative cinema of “woman as image/man as bearer of the look” (9). Does In the City of Sylvia engage in this very critique by means of a deliberate simulation of its (cinematically precedented) terms? Or does it indulge in the gender-polarising gaze under the pretext of its fictive enterprise? An indulgence on whose behalf: the character, the director, the audience? The notion of subjective agency – that which is denied the woman through objectification – is deliberately undermined by Guerín’s approach, in which there is no recourse to interiority among characters, only the instrumentality of individual wills on a perceptible surface (10). The distinction lends the film a decidely less anthropocentric outlook than its operative love story suggests.

Where are “things”? In amorous space, or in mundane space?

Guerín performs a small sleight-of-hand in the film’s final section, in which a litany of faces is again mounted in succession (12), seemingly summoned by the gaze of the dreamer (or willed into being by the film’s disembodied horizon) as he sits on the tram platform, his anonymous subjects suspended as if in collective introspection, appearing at once vulnerable and implacable. There’s an uncanny tension in this difference, between the look of things through the amorous gaze and the ways of seeing which recover from such hallucinations an autonomous otherness. Is it possible, the film suggests, to discern them independent of each other? The tram passes and divides the field of view into composite images – analogous to film itself – and from these rushes the face of Sylvia emerges, an apparition that haunts and sustains the dreamer’s fervid project of longing (and invokes the editorial process of the director, scanning successive images in search of…) (13).

The film’s final frame returns to the scene of Sylvia’s disappearance, at an intersection where the tram’s track bends, where she vanished as ephemerally as she arrived, no longer circumscribed in the dreamer’s amorous outlook to an idée fixe. The shot memorialises the occasion in its excess of absence: the lover gone, the street now sunk in the fading light of dusk, the memory receded. Holding the shot, however, Guerín extends the possibility, ever available, that there is consolation in our encounter with the present, with strangers who exist beyond our imaginative uses for them, beautiful and enigmatic.

perhaps we shall meet again but fail to recognize each other…