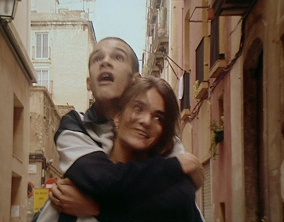 Work in Progress (En construcción), José Luis Guerín’s fourth feature, details the complexities of everyday neighbourhood life in Barcelona’s formally rundown Barrio Chino or the Raval (the name by which it is also known). Shot over a two-year period, the film follows the demolition of a dilapidated apartment complex and its re-emergence as luxury accommodation for a new breed of resident. From the beginning, the film announces itself in deceptively modest terms in an on-screen message which reads, “Things heard and seen during the building of a new housing block in ‘El Chino’, a working class area of Barcelona that was born at the start of the century and died at its end”.

Like other port districts, the Raval has long been a zone of human transaction, of bodily exchange, of prostitution, itinerant living. It has provided both a home to immigrants, peripatetic seafarers, and a gateway for invaders – Greeks, Phoenicians, Romans – whose spirits inhabit the city’s substrata. This is a neighbourhood of haunted houses. A decade before the making of En construcción large swathes of the area along the seafront were bulldozed and its residents dispatched to new accommodation in the outlying reaches of the city as part of the spectacular facelift that accompanied preparations for the 1992 Barcelona Olympics. Indeed, the Olympics themselves are an historical benchmark, often seen as the most public manifestation of Spain’s democratic arrival and, in Cataluña, as symbolically establishing the region as a “nation” on the world’s stage. An early shot in the film, and one returned to with obsessive irony, is of the publicity hoardings announcing in Catalan that the rehabilitation of the district is backed by European Union funds. Apart from the language and the geo-political reference, the image itself is wry. As much as it concerns architecture, urban planning of the modern period has always staked a claim to securing demographic hygiene. The picture on the poster is of the projected central square of the new Raval, lined with palm trees, open, spacious and embellished with greenery. The Barrio Chino is to be cleansed of its cramped, insalubrious interiors and its unsavoury residents. Such intentions of course – as the film insistently hints – ignore “the propensity”, as suggested by Freud, “of the familiar to turn on its owners” (1).

When Michel de Certeau writes of the “uncanniness of the ‘already there’”, he makes a punning gesture to his own Freudian legacy (2). De Certeau’s subject matter is precisely the neighbourhood and the “heterogeneous references, ancient scars” (3) of previous occupation that disturb the functionalist planners of urban renovation. “A stranger”, he writes, “is already there, in residence”. It is apt then, that almost all the individuals who populate En construcción come from elsewhere; they are either Moroccan building workers or Xarnegos – the derogative Catalan epithet applied to those who have emigrated to Cataluña from other parts of Spain to find work. They are, for the most part, living provisionally; that is, they are unsettled, displaced and nostalgic. Nostalgia pervades the film both in terms of expressions of dislocation – such as homesickness – or in recollection of the neighbourhood in previous times.

In a remarkable sequence early on in the film as the workers demolish the old building they discover the remains of a Roman cemetery. The observations of the locals who crowd around behind fences and comment on the activity below them are recorded as skulls, rib cages and entire skeletons are revealed. “It is an ethnic massacre”, one man proclaims, shortly before the news broadcast over the radio makes clear that construction work on the block is taking place during the time of the conflict in Kosovo. An elderly man, in turn recalls the disappearances and the killings in the neighbourhood during the Civil War (1936-39) when he was a child. History and geography converge around local politics and contemporary international conflict. Time thickens with contemporary implication.

Indeed, time here does many of the things it is not supposed to do in documentary film. In spite of its initial apparent claim to “fly on the wall” verisimilitude, this is not journalistic reportage. The lens of the camera, like the painted set of eyes on the crumbling wall seen in the very first shot (a telling symbol in its own right), pays witness, in startling ways, to those who inhabit the space of the film. Chronological time – returned to over and over again by reference to watches, by repeated shots of the Barcelona skyline with its looming clock on the horizon, by the cycle of seasons, and even biological time as we are privy to the very obvious development of one resident’s pregnancy – vies with diegetic time.

Filmic time is, of course, like urbanism, spatial. The palimpsestic quality of this neighbourhood, its history spatially measured in a series of stratified layers from its skyline to the forgotten cemetery beneath its foundations, is compounded by the cinematic references. En construcción begins with a prologue taken from archive footage of the same neighbourhood shot in the 1950s. We see black-and-white images of prostitutes on the street, men queuing to enter brothels, a long take of a drunken sailor staggering his way out of the district. Just as the discovery of the Roman tombs has relevance to contemporary life, a kind of filmic archeology – self-consciously staged in En construcción’s bold use of archival material – also makes clear the continuities between contemporary streets and buildings and the past, the “already there”. Furthermore, on the morning following the televised transmission of Howard Hawks’ Land of the Pharaohs (1955) the work’s foreman and its architect debate pyramids and perishability, bringing world history back to bear upon the building site by means of film.

En construcción is a film about displacement and dwelling. It is also a film about the fragments of diaspora as they gel around the idea of place. Diaspora is the condition of those Spaniards who went into exile (and thus homelessness) in the aftermath of the Civil War; it is also that of Spain’s Arab heritage and of the economic migrants from the poorer regions who flocked to cities like Barcelona. To this end Antonio, the old sailor – the verbose stalwart of the district – apparently homeless, figures as an integral member of the community in contrast to the estrangement experienced by the wealthy Catalan newcomers who establish themselves in the luxury apartments. Antonio is a bricoleur who scavenges in skips for things and repairs what he finds for sale. But he is also a bricoleur of speech who has travelled the globe and speaks several different languages. His worldview, nonetheless, radiates out from his neighbourhood, amid the rubble. Antonio roams in a haunted landscape marked by the ruins of the old building and the shell of the new one, the dismembered bodies and the traces of architectural forms, the places and people who are invested with a ghostly presence.