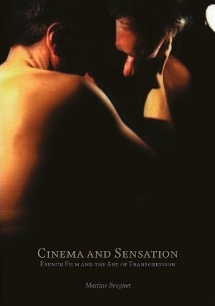 Those familiar with French director Claire Denis will be aware of the exquisite sensuality of her cinema. Whether coming together with another body in the world through the shared space and flesh of desire, or being driven apart from others by personal and sociopolitical circumstance, bodies – their gestures, bites and kisses, alternately languid or energetic movements, postures, habits and rituals – are the very “stuff” and substance of the film experience here. Given her privileging of the senses and her amenability to, as well as considered dialogue with, philosophers of the body, Denis is at the forefront of a number of contemporary directors (by no means exclusive to France, if we consider the work of figures such as Hou Hsiao-hsien, David Lynch or Wong Kar-Wai) who are generating much interest from sensually alert film scholars (1). Adrian Martin, for instance, identifies “the bedrock of Denis’ cinema [as] the flesh”, while Elena del Río comments that the “film body” of the cinema itself becomes a “sensation producing machine” in Denis, as if each film were “sending ripples of affect and thought across a diversity of its movements”, independent of the body of the viewer (2). The arresting materiality that infuses Denis forces us to look anew at sensory encounters with the cinema. Denis (alongside contemporary French directors such as Catherine Breillat, Bruno Dumont, Vincent Dieutre and Philippe Grandrieux, whom Martine Beugnet locates as part of a French “contemporary cinema of sensation” [p. 14]) demands from us textural rather than purely textual approaches, if we are to grasp the sensual significances of cinema.

Beugnet, in her Cinema and Sensation: French Film and the Art of Transgression, develops just such a textural, existentially immanent and materially pressing mode of analysis for these filmmakers. As she writes, “it is the materiality of the medium of the moving image that first comes to the fore here”, adding that her concept of a “cinema of sensation” involves “an approach to filmmaking (and, by extension, to the analysis of film) that gives precedence to the corporeal, material dimension of the medium” (pp. 3, 32). It is one of the real strengths of Beugnet’s study that she does not end up reifying sensation as belonging exclusively within the films that she examines, nor within the body of the spectator. Rather, her book foregrounds the many ways in which film and viewer are compassionately, passionately (and sometimes painfully) intertwined. Cinema and Sensation is a fine instance of the rewards that just such a correlative and sensually descriptive approach might yield – not just for the Francophile but, potentially, for other directors or national cinemas, as well as those who wish to return to film history through the route of the senses.

That said, it is the major premise of Beugnet that a cinema of sensation is especially in play within contemporary French filmmaking; so much so that it constitutes a unique corpus in its own right. To quote Beugnet:

A specific sense of momentum emanates from the work of a number of contemporary French filmmakers, evidenced by the release, in close succession, of a batch of films which betray a characteristic sensibility to and awareness of cinema’s sensuous impact and transgressive nature… (p. 14)

Examining these films as sensuous and “perceptual objects”, Beugnet argues for recurring stylistic figures and motifs – an emphasis on the corporeality of film as opposed to French traditions of scenario and/or dialogue-based cinema, the cultivation of “transgressive” extremes of feeling and emotion through the evocation of graphic sex and violence – without identifying the French cinema of sensation as a genre as such (pp. 16, 32). For Beugnet, in point of fact, this corpus is best defined as “‘unclassifiable’” because a “disregard for genre boundaries is as much a feature of the cinema of the senses as the blurring of the border between figurative and abstract” (p. 16). Through their preoccupation with the materiality of the cinema, Beugnet suggests that such experimental/art films “work to destabilize the primarily narrative and representational models” of what she situates as the “mainstream cinema’s standardized formats […] plot and characters, identification and narrative logic” (pp. 9, 5). In this regard, while I appreciate Beugnet’s stunning analyses, I am hesitant to adopt such divisions. Genre itself is an inherently hybrid and indeed fluid entity, as theorists such as Rick Altman attest (3), and my “sensual apprehension of film” (p. 5) is arguably no less present nor less potent when I feel the kinesthetics of bodies flying and falling through the air in the Spider-Man series (Sam Raimi, 2002, 2004, 2007), say, although that experience occurs in a Hollywood blockbuster. As Vivian Sobchack points out, “all films engage the sense-making capacities of our bodies, as well as of our minds – albeit according to different ratios (or rationalities)” (4). In these terms, the French cinema of sensation may well be an especially charged and particular instance of the shared embodiment that occurs on-screen and off- in all cinema, through what Sobchack would identify as the innately cinesthestic bases of the film experience (5).

Inflected by the embodied approaches of a number of contemporary film scholars (Sobchack, Steven Shaviro and Laura Marks), it is fitting that Denis’ cinema looms large in this book. Preoccupied with and dwelling upon the different textures of the material world – think of the crisp, starched uniforms of the legionnaires in Beau travail, the intimate landscape of the skin and its rupture in Trouble Every Day, the tendrils of cigarette smoke that infuse Vendredi soir or the warm dough of Nénette et Boni (1996) – Denis’ cinema enlivens the senses, encouraging us to feel the image through a series of embodied and emotive linkages between film and viewer. Beugnet’s analyses are sure to be of interest to Denis fans out there, as well as those with a more general interest in cinema and the senses. In point of fact, Denis is almost emblematic of the French cinema of sensation that Beugnet claims and its ability to create “vivid sensory world[s]” by appealing to our embodied perceptions (p. 82).

Through very simple as well as elaborate operations, cinema can thus reawaken or make the viewer conscious of sensual correspondences. Through framing, camera movement, light and contrast, the grain of the image and the mix of different film stocks, as well as the variations in sound and visual intensities, the effect of the audio-visual extends to touch, smell, and taste, and, in turn, operates a relay between the sensual and the emotional – the diffuse but pervasive multi-sensory evocation of pleasure, desire, longing, fear and terror. (p. 74, emphasis mine)

Given that Beugnet is concerned with filmmakers who have been labelled the new French “extremism” or a cinema du corps (where physicality occurs in brutally intimate, visceral terms through conjunctions of sex, blood, flesh and violence) (6), it is refreshing that she is not only concerned with the violent or the shocking. Unlike previous discussions of Breillat or a film such as Baise-moi (7), Beugnet willfully moves between a far more enlightening spectrum of oscillating pleasures and pains in her exploration of contemporary French cinema.

While these films are marked by their “graphic violence or sex […] a violently disjointed relationship between subject and object that quickly brings the cinematic into the realm of the abject”, Beugnet reminds us of how this corpus is also invested “in a celebration of the sensual, reflexive bond of subjective body to objective world” (p. 32). While we are assaulted by the many shocks, tremors and terrors of the body in the French cinema of sensation, we cannot forget the ways in which we are seduced by and caught up in their material joys. As Beugnet is right to insist, “to be immersed in [these] films’ sensuous and aesthetic fields, to experience the effect of the films’ materiality, the multi-sensory variations of intensities, is also to delight in the distinctive capacity of film to become ‘a sensual and sensible expansion’ of ourselves” (p. 124). With a keen eye, an alert ear and a ready sensitivity to the embodied textures of the French cinema of sensation, Beugnet evokes the pleasurable as well as painful ways in which film and viewer are not distant or disembodied strangers to one another.

Foregrounding the reciprocal embodiment of film and viewer, Cinema and Sensation: French Film and the Art of Transgression makes for an intellectually elegant and compelling read. The now seemingly requisite Deleuzian concepts are very much the frame for this study. (Is Gilles Deleuze our only critical recourse in the sensual approach to film? The phenomenological philosophy that informs Sobchack, the work of cultural anthropologists or the inter-medial histories that Brigitte Peucker establishes for cinema (8), do suggest otherwise.) Regardless of whether you follow the Deleuzian camp or not, there can be little doubt that Beugnet successfully weds her philosophy with a sensual attentiveness to the cinema – in turn, she generates some of the most elegant film analysis that is to be found within the current return to the senses in film theory (9).