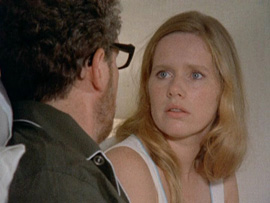 What balance of novelty and familiarity sustains a marriage? How can a couple remain both dynamic and intimate? How does anyone maintain a monogamous commitment when the thrill of discovery physiologically quickens the pulse, or when one person will never be everything to another? Why does anyone betray another, when exposure can turn the stomach?

In 1960, Michelangelo Antonioni famously claimed that “eros is sick”, insofar as the technologically evolving world hadn’t engendered an accordingly evolved moral landscape: people’s expectations for emotional commitment were incompatible with the sensual and stimulating modern world. While Antonioni’s films portray this intersection of antiquated morality and technological advancement through a mostly anesthetised aesthetic (in character-diminishing landscapes and erotic encounters eerily void of pleasure), Bergman’s films insist upon the pain of feeling within that modern world. Instead of creating stories and a style that perform this moral/technological estrangement, Bergman focuses intimately upon the emotional causes and effects of feeling incompatible desires within the modern world – a tension stunningly exemplified in Scenes From a Marriage.

Chronicling the waxing and waning of love and commitment between Marianne (Liv Ullmann) and Johan (Erland Josephson), Scenes From a Marriage moves through the daily joys and struggles of a working marriage, the devastating announcement of a desire to separate, the struggles of each person to rebuild his/her life post-separation, and the exploration of the affection that remains, despite the dissolution of marital bonds. Where Antonioni might coolly distance the spectator through stylistic numbing akin to the character’s disingenuous or unfulfilled yearnings, Bergman’s bold proximity features excessive facial close-ups (visually, Ullmann’s lips and eyes tell their own story with a full range of emotions) and enduring long takes, which thwart a cool distance and demand spectatorial engagement. In Scenes From a Marriage, surprising moments of sexual attraction (e.g. Marianne’s vengeful and lustful visit to Johan’s office, for the signing of the divorce documents), coupled with devastating encounters of utter indifference or, worse, grief (e.g. the anxiety-laden sleepless night before Johan’s morning departure), indicate the mania of this relationship; and yet Marianne and Johan’s continual turning toward one another shows the gentle and consistent tenderness of their enduring affection.

its timeliness as a social document. To countless husbands and wives experiencing profound shifts in the foundations of modern marriage, the tribulations of Johan and Marianne reflected their own dramas, staged either openly or in hidden theaters of the mind behind masks of conjugal felicity. (1)

Numerous reviews of Scenes From a Marriage estimate its sociological impact on modern marriage; and critics often describe the film’s success in relation to an increasing prevalence of couples’ counseling and/or divorce rates (2).

Throughout Scenes From a Marriage’s intense and lengthy screen duration, Bergman orchestrates the beauty and terror of intimacy over time, the ways that people and relationships age: the ever-difficult lesson of any love requiring both work and whimsy, the way years breed familiarity both satisfying and exhausting, and the continual need to make new or defamiliarise what we know, such that discovery and fidelity need not be mutually exclusive. Both style and story capture the human desire to make permanent that which must change, all the while suggesting the beauty of change over stasis. In essence, Scenes From a Marriage advocates a cinematic becoming over a photographic stasis.

Shot in 16mm for television and transferred to 35mm for its film release, Scenes From a Marriage’s grainy images subtly suggest the dissolution of faces the intimate shot scale otherwise seems to love. A further result of increased grain, light seems gently to trickle into these otherwise claustrophobic interiors: we experience this film as if through a nervous yet steady light or an anxious morning haze, the features of those at whom we look simultaneously developing (as if a photograph in the darkroom) and dissolving before us. While its grainy image and spare palette wash out most settings beyond the parameters of the face, Scenes From a Marriage thematically and narratively explores the ways that intimate relationships and, more acutely, physical bodies bear the passage of time. As much a portrait of aging as of intimacy, Scenes From a Marriage considers the sexual, sensual, and familial evolution of a relationship, while also concentrating on the ways that bodies and faces weather the years.

While close-ups predominate in this and all of Bergman’s films (attributable, here, to esteemed cinematographer Sven Nykvist), Scenes From a Marriage’s close-ups of Marianne – from her initial basking in the glow of their marriage to her devastated betrayal, from her resplendent post-separation renewal to her vulnerable self-reflection – cast her facial features as the film’s most affective realm. Early in the television serial, Marianne tells a magazine interviewer, “I wish [this marriage] could always be like this, that nothing ever changed”; yet this statement occurs within a long take facial close-up, in which the gentle fluctuations of her mouth and eyes visually insist upon the impossibility of such stasis. Despite Marianne’s claims to the contrary, Bergman reveals the pleasure inherent in the experience of change by focusing close-up long takes on the shifting of Ullmann’s features; the film trains our spectatorial gaze to cherish the beauty of mutability through the visual pleasure of these close-ups of subtle movements. A microcosm of the film’s tension between change and stasis, these close-ups establish tension between Ullmann’s clear blue eyes, a gaze impervious to age, and her slightly-freckled ivory skin, whose lines and freckles only increase with age.

In one particular sequence, halfway through the film, this constancy (of Ullmann’s gaze) overtly establishes the visual continuity of her character, while Marianne’s words suggest the unraveling of this integrity. In this sequence, Marianne and Johan meet for the first time after separating. After reluctantly resisting Johan’s advances, Marianne offers Johan insight into her emotional development by reading him her latest diary entry: “to my surprise, I must admit that I don’t know who I am. I haven’t the vaguest idea,” she begins. In one of the most self-aware and lyrical sequences of modern cinema, she proceeds to chronicle her familial, emotional, and sexual coming-of-age. Most astonishing are the still images that visually punctuate the voiceover’s lyrical self-reflection. Bergman incorporates Ullmann’s own past into this fictional world, as Ullmann’s baby-to-adolescent photographs comprise a montage over which Marianne reads. We glimpse a woman –be she Ullmann or Marianne – swiftly move through developmental stages, as if we can know her through this visual intimacy; yet this sequence also undermines the credibility of photographic history, insofar as these several stills hardly supplant or even approximate the actual experience of her past. Just as Marianne and Johan awkwardly “pose” for a magazine photograph at the film’s beginning, these still photographs accentuate one’s self-stylisation before the camera. At once Marianne’s life expands (photographically creating her past) and Ullmann’s personal history emerges; yet, similar to (though less acute than) Persona’s (Bergman, 1966) famous enmeshed facial close-up that disturbingly jolts the spectator, Scenes From a Marriage’s photographic stills fabricate an identity as finite as the moments captured. Moreover, this photographic montage unifies through the motif of Ullmann’s eyes: from infant to schoolgirl to sexually-awakening adolescent to bride, Ullmann’s eyes bear time less overtly than the physical body or skin (eyes don’t grow, after all). In a brilliant evocation of film’s complicated and shattering relation to aging (the body and face change, while her eyes continually attest to these photographs being Ullmann’s own), the sudden appearance of photographic youth compresses this life – both actor and character – into these smiling, quickly aging, postures.

This photographic montage contrasts with the real-time of the marriage, rendered through agonising long takes and close-ups, in which the difficulty of being honest and loyal, of being hopeful and defensive, of waiting and of not knowing how to fill the silence with words or gestures, seems to last far longer than its actual screen duration. Towards the end of the film, Marianne and Johan celebrate twenty years of their marriage, “an entire lifetime”, as Marianne says: “we’ve spent an entire grown-up life together; isn’t that strange?” By this point of the film, we (characters and audience) have spent nearly three hours together (hardly twenty years, but a temporal endurance nonetheless). This commitment means sitting through less-interesting, even unpleasant, conversations, because we hold out hope for the return of concentrated and impassioned engagement. To compare the photographic montage with the film’s duration, “time flies” in youth and moves slowly in adulthood, as both story and especially style suggest.

An important lesson in emotional literacy as well as a stylistic paean to the face in close-up, Scenes From a Marriage balances cringe-inducing sequences with visually stunning or heart-warming moments, such that our experience of their experience includes seduction (by words, phrases, faces, colours) and repulsion (as these faces become ugly before us, as they crumble in grief or pain; or as they hurt each other in ways that, to keep watching, we’re as masochistic as they are). For example, Bergman mitigates a difficult tension-filled conversation with a close-up of Ullmann’s face against a green chair – the clear emerald upholstery accentuating the vulnerable riveting blue of Ullmann’s eyes. In colour and facial features, Bergman indicates a stylistic harmony; in dialogue and plot, Bergman highlights the relationship’s difficulty. Marriage believably comes to be this movement between seduction and masochism, between longing and fulfillment, between disappointment and expectations exceeded. The ways that these characters continually struggle through their pain also characterises our spectatorial experience of their relationship: the beautiful encounters make the brutality worthwhile.