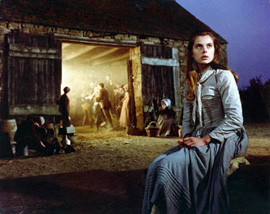 Several 19th century painters come to mind while watching Roman Polanski’s Tess: Sir John Everett Millais, Jean-François Millet and Jean-Baptiste-Camille Corot. The exquisite cinematography calls to mind both the moody and romantic landscapes of Corot and the social realism of Millet while the first scene between Tess and Alec, when he offers her fresh strawberries, recalls Millais’ painting The Woodsman’s Daughter. Thinking about these painters aids viewers in their interpretation of the film. For instance, consider various landscapes where Tess appears: in the fields with her baby; walking through the mud to see Angel’s family; surrounded by the police at the film’s end. Each scene reveals that her complex characterisation is as moody and intense as the scenery that surrounds her. This characterisation is reinforced by the cinematography. The cinematography works, then, to intensify our understanding of the film and highlights Polanski’s meticulous filmmaking.

Polanski’s meticulousness is significant. Denis Meikle points out that “Roman Polanski’s approach to filmmaking invariably was slow and precise and mood-building but, on Tess, he excelled himself” (1). Furthermore, consider a 1979 interview that Polanski gave to Max Tessier. In his interpretation of Hardy’s vision, Polanski contends that the passage of time has provided us with needed insights for deciphering the novel: “Today we have a frame of reference spanning a hundred years to fully understand Tess’s actions” (2). The painterly quality of the cinematography provides contemporary audiences with a frame of reference for interpreting the film that the passage of time has clarified. James Morrison reveals that contemporary commentators on the film, such as François Truffaut, tended to dismiss it (3). However, as an audience, we now have had nearly 30 years to create a “frame” for developing our own understanding of Tess and its place in the context of Polanski’s other films.

In Tess, the cinematography also underscores the mythological elements of Hardy’s novel. Take the film’s opening scene. After a long shot of women walking down a country lane and passing a crossroad, we see them enter a field. They are carrying wheat stalks and are dressed in white. They begin dancing in the field while three men walk along the same road watching them. Like the other women, Tess is dressed in white with white flowers in her hair. The predominant colours, white and green, ironically call to mind life and fertility, yet in Tess, they underscore the ultimate tragedy of Tess’ fate; the colours of white and green give way to the color red at the film’s end just as Tess’ joy and simplicity give way to her death.

Moreover, while Angel joins the group, he rejects Tess in favour of another partner – something she will remind him about when they work together on the dairy farm. This rejection will be repeated later when Angel learns of Tess’ life with Alec. The opening scene, then, frames the story and works with the closing scene where we see Tess leaving Stonehenge with Angel after being arrested for Alec’s murder. The fertility rituals of the opening lead to the sacrificial rituals of the closing.  Tess is rejected as a partner but accepted as a sacrifice. Along with the images of the women, Polanski uses images of the sun quite carefully to suggest Tess’ fate. In the opening scene the setting sun creates an impression of Tess’ impending doom. While at the closing, the rising sun seen through the upright stones of Stonehenge reinforces Tess’ characterisation as sacrificial victim. This ironic construction of Tess as sacrifice works in two ways in the film. First, she is offered up to Alec and the D’Urbervilles by her parents’ ill-fated desire for status. Tess’ father and mother plot to have her introduced to the family and hope to have the introduction lead to a good marriage. Of course, their schemes will end tragically.

In these opening scenes of the film, Polanski employs several important visual clues to accentuate these themes. For example, after a coach ride to the D’Urberville home, Tess walks up to the house through a Gothic Cathedral-like grove of trees only to be disappointed by the newness of the house, which underscores the newness of the D’Urberville name that Alec’s father has bought. Reality destroys expectations much as the relationship between Alec and Tess will destroy her. Second, this first scene between Tess and Alec calls to mind the opening of the film by the use of fruit and flowers and strengthens the vision of Tess’ fate. Tess tells Alec of her parents’ desire that the older branch of the family should call on the younger branch – to which Alec asks “Stokes” and Tess replies “No, D’Urberville”. We see some of Alec’s cynicism as he answers, “Yes, I meant D’Urberville”. Alec goes on to offer strawberries, a treat Tess can only have in season. However, Alec points out that strawberries are in season in the hothouse gardens of the D’Urbervilles’ home –hinting at the luxuries he could provide Tess, as well as the sexual experience he offers. As he seductively places the strawberry in Tess’ mouth, the red colour of the berry hints at the red hue of the gown Tess wears in the scenes after she has murdered Alec, as do the roses he uses to decorate her dress. Polanski subtly emphasises the connection between strawberries, roses and death in these closing scenes. The colour red will appear again when Angel sees the small bloodstain on the hem of Tess’ petticoat as they are riding on the train after the murder, and when the landlady sees a small patch of blood on the ceiling.

Aside from the understated use of the strawberries and the colour red, Polanski employs other visual connections and cues in the film. Consider the scene when Alec rapes Tess. The scene occurs after Tess and her compatriots leave a barn dance and Alec has followed on horseback. In order to escape a fight with her friend, Tess accepts a ride with Alec. The dense thicket of trees recalls the avenue of trees that leads to the D’Urberville mansion. The area is claustrophobic and calls to mind the end of the film when Tess is surrounded by the police and equally hemmed in. Additionally, Polanski uses mist to obscure the scene – emphasising the problematic nature of the rape. Concerning the rape, Morrison argues,

After Tess is raped, her beauty is seen to be polluted, her marginal visibility denied. Polanski emphasizes this point by making Angel Clare’s rejection of her more fickle than it seems in the book. As rape victim Tess is never visible – or as the film would have it always visible, but never seen. (4)

The problem of Tess’ visibility becomes apparent in the scenes that follow the rape. After she leaves Alec and gives birth to their child, Tess appears in scenes filled with sunlight, as if the birth has driven away the dark and claustrophobic world represented by the forest. These sunlit scenes follow Tess to the dairy farm where she meets Angel again. While Polanski initially associates the sunlit, pastoral world with Angel, particularly as we see his affection toward Tess, any sense of light and joy that a relationship with Angel might bring is short-lived.

Moreover, Polanski further underscores Angel’s problematic response to Tess by the use of landscapes. For instance, when Tess and her companions are going to church, they come across a shadowy, flooded lane. They strive to cross it without soaking their dresses. Angel comes by and carries each woman across the water. Although it is outwardly wholesome and tender, the scene recalls the rape scene in the forest because Tess tries to resist Angel at first. Furthermore, after Angel rejects Tess on their wedding night and goes to Brazil, the landscapes associated with Tess become snow-covered and dominated by blues and greys. Polanski employs such a landscape to make Angel’s spurning of Tess seem much harsher than Alec’s cynical and worldly response toward her. These painterly moments shown in the cinematography reveal a dynamic understanding of Hardy’s novel.

Polanski’s Tess is a visually powerful film, punctuated by painterly moments that highlight important themes and character relationships. The alternating use of light and dark landscapes, as well as the careful attention to detail, helps to make the film a provocative retelling of Hardy’s novel. Although initial critical response to the film may have often been lukewarm, as Truffaut’s reaction reveals, the passage of time demonstrates the film to be certainly one of Polanski’s most enduring cinematic creations.