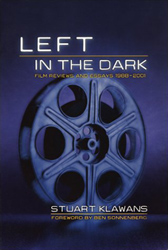 Tension marks the allure of superior criticism – ideally, there should be a conflict between text and subtext, between what we’re lead to think in the opening, and what we’re surprised to learn at the end. Writers like Pauline Kael, Manny Farber or Jonathan Rosenbaum will stun readers, particularly newcomers, by the apparently acerbic provocations of the prose and the teasing of complexity and sophisticated nuance of their thoughts – they’ve engaged, individously yet casually, with a range of ideas and counterarguments. And certainly the biggest let-down occurs when the writing collapses into a familiar drone of lazy buzz words – as when Kael grew overly fond of the term “kinesthetic.” Staying smart and astute while facing deadlines is hard, and honest Stuart Klawans has no illusions over his own occasional deficiencies. Over 60 of his reviews, plus the occasional feature, from a 13 year span have now been collected: Left in the Dark, as a title, could just as well allude to the intellectual compromises of film reviewing.

In the back pages of The Nation, every two weeks, Klawans shuffles with Agee-style agility through plodding plot synopses, fragmentary analyses and opinionated commitment – sometimes regrettably in that order. Ultimately every film, save the really dull ones, is a mystery, inexhaustible; he cuts across them fleetingly, adroitly pointing the reader to a broader interpretive context, while zeroing in on a formal peculiarity, a thematic ambiguity. He lacks the leisure and libraries of an academic; more drastically, his magazine can’t even afford to keep him on staff. His avowed mentor is late Times critic Vincent Canby, who could write briskily, humorously, humanely on admittedly demanding fare (he championed Fassbinder). But sometimes, such as in Canby’s Times-tailored prose, a critic’s most conspicuous limitation is her/his “humanity” – a commonsensical parochialism that’s incapable of the radically idiosyncratic and novel insights of much great criticism.

Klawans adeptly pursues the tradition of what one could dub the “gentleman critic”: i.e. a witty, humble, sophisticated layman of sorts who juggles the occasionaly confrontational polemic with quoteable doses of erudition and even-handed judgement. The profile most celebratedly fits the late James Agee, of course a Nation critic himself; “[t]he testimonial of Agee’s worth was the cleft in his self-regard,” wrote Donald Phelps in his book Covering Ground, “the desire to be the provincial which his limitations decreed; warring against the desire, never entirely articulated […] to be something considerably larger and wider.” (1) It isn’t entirely fair to pigeonhole Agee, as his critics sometimes do, for his unfailing renown among the literati and the middlebrows; for starters, he was no snob, and at his most daring he could defend the then tenaciously unpopular Carl Dreyer.

Only consider that defense, which laboriously makes its way to this astounding conclusion: “there is only one rule for movies that I finally care about: that the film interests the eyes and do its job through the eyes,” Agee wrote (2). Similarly Klawans, grappling with Abbas Kiarostami’s elusive and arid Taste of Cherry (1997), remarks: “Once you say what the film’s about, you can’t say anything more. But this point, at which description falters and analysis fails, is precisely where Taste of Cherry begins. That’s why it is a masterpiece.” [p. 22] This brand of muddle-headed mystifying is Klawans’ most reliable blind spot; precisely what Godfrey Cheshire has intelligently argued against in his own appraisal of the Iranian filmmaker.

Generously, Klawans will frequently write unquerellously and conversationally to his readership. He opens a review of My Own Private Idaho (1991) remarking that “everyone” has a favorite scene in the Gus van Sant film; several paragraphs later, he mentions his own. Klawans is a child of ’60s cinephilia, a generation recognized as witnessing the first tides of the New Wave and the ascendency (and warring camps) of Pauline Kael and Andrew Sarris. Beyond Agee’s convivial influence, Klawans’ writing is indicative of a communal attitude towards moviegoing and revieing: a wandering, ever-extended dialogue among like-minded buffs.

He’s particularly good at working through the intangible qualities of notoriously difficult filmmakers. If “the great achievement of the age of reason was to discover reason’s limits,” he summarizes, indulging in a little encyclopedic preaching, “some of the bravest thinkers and artists have mounted expeditions into the territory beyond.” [p. 183] In his piece on The Sweet Hereafter (1997), he drives the point home: “All of Egoyan’s films have dwelled on the theme of life after loss,” he notes, “the way your mind keeps circling back until time becomes spongy; the way the present moment seems to pass at a slight remove, just beyond the dead space that surrounds your body.”

Hinted at throughout the book is a highly selective outlining – a sketch of the intellectually austere-formalist wing of cinematic modernism. Incipient in the early masterworks of Dreyer and Robert Bresson, this aesthetic picks up steam with Antonioni. From the ambulatory-realist mode of his documentarian beginnings, his style grew into a near-static, photogenic fixation on urban loneliness – anticipating many of the filmmakers Klawans discusses, including Egoyan, Kieslowski, Todd Haynes and possibly Kiarostami. Caught up intellectually in the web of contemporary social life, but cleansed of political passion, this directorial legacy is just one flip-side of the modernist coin.

This splintered heritage, between the reflexive and the galvanized, is alluded to with considerable even-handednesss in Klawans’ review of the meditative, autobiographical Chronicle of a Disappearance (1996). “Yes, he’s unmasked the absurdity of Jewish nationalism, but without affirming Palestinian nationalism,” he concedes, balancing his appreciation of Elia Suleiman’s “thoroughly extraordinary” film, “Such loftiness is possible only for intellectuals, artists and those who have never missed a meal; a day-laborer under curfew in Gaza might prefer a political response that fits in the hand.” [p. 178] 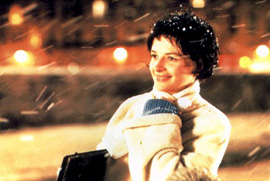 Though he’s no strict formalist, Klawans’ paralysed devotion to art-house pomp and splendor grows vexing. When he jokingly describes the belated American release of Leos Carax’s The Lovers on the Bridge (1991) as an answer to his prayers, it seems more a gaffe exposing the strangely credulous appeal of the film. Elsewhere, Carax’s cult item has been adroitly dismissed as a rehashed sampling of Surrealist soundbites and Jean Vigo-derived artifice. Far better is his razor-sharp debunking of David Lynch’s Wild at Heart (1989), a macho pastiche of B movie memorabilia, in which “the presumed assault on bourgeois order is safely contained – in an art gallery, at a performing arts center, on the screen.” [p. 48] The piece is all the more salient given the wider popularity, a few years later, of Quentin Tarantino and Oliver Stone’s Natural Born Killers (1994) – the distinctive rot of the so-called “scuzz film” now fully mainstream. (3)

Possibly the two most insightful pieces of the book are Klawans’ defenses of Katt Shea’s The Rage: Carrie 2 (1999) and Jane Campion’s The Portrait of a Lady (1996); the former is a vilified follow-up to the Brian DePalma classic, the latter so steeped in ambiguity it was initially greeted with critical misapprehension. For Klawans, the theme of sexual frustration runs through the original Carrie – not simply the title character’s, but DePalma’s own, who “humiliates and destroys Carrie because she’s the girl who won’t put out.” [p. 66] Allegorically, the film is a sadomasochistic jab at the sexually non-compliant, much to the consent of the entertained, free-thinking audience.

The Rage strikes back against the boy’s clique who systematically bed and dump every virgin in sight. The film’s sexual politics are remarkably even-handed; Shea is accusatory in her scorn of the high school obsession with “scoring,” while still gamely supporting teenage sex. As Klawans sums up, Shea’s exploitation films are really about “the possibilities and limits of a woman’s sexual power.” Or, as long as sex and power remain intimately connected, the “boy’s club” that Shea and Klawans deplore won’t give an inch – a puritanical morality, if you agree that “egalitarian sex” is just another word for an idealist’s wet dream.

Jane Campion is preoccupied with the same problem, albeit differently. Part of what makes her delicately arranged Portrait so seemingly blurred is its mix of visual claustrophia and stubbornly opaque characterization. The gap between our sexual mores and the circa-1873 ones of the characters stays incommensurably wide, while the monochromatic gloom and tight compositions keep us within their breathing distance.

Klawans focuses on the most jarring sequence: Isabel’s brief vacation before her marriage (and capitulation) to Gilbert Osmond, rendered in the faded look of a 1920s silent short. The anarchronistic interlude, dated by our standards, “would be impossibly futuristic to Isabel Archer.” [p. 174] Socially limited and sexually overwhelmed, in the 1920s she “would have had a way to articulate her dilemma. Fifty years earlier, without such means of expression lying ready to hand, an Isabel could only have blundered ahead.” [ p. 174]

That’s what ultimately makes Left in the Dark, its shortcomings notwithstanding, so eminently worthwhile; at his exceptional best Klawans slows down the on-screen flux for his readers, his train of thought ten times quicker than our own.