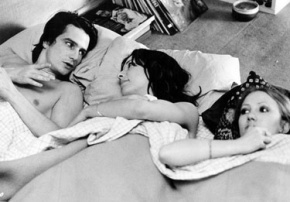 Jean Eustache made twelve films, of which his first feature, La Maman et la putain (The Mother and the Whore) is still considered his masterpiece. According to Cahiers du Cinéma, it is nothing less than the only true “May ‘68” film in French cinema (1). It won the Grand Jury and International Critics Prizes at the 1973 Cannes Film Festival, where it created scandal and outrage as, after the screening, many critics accused it of being immoral, obscene and, as the conservative broadsheet Le Figaro put it, “an insult to the nation” .

La Maman et la putain is the minute examination of the relationship between three characters caught in a love triangle, but above all it is the portrait of a young man, Alexandre (Jean-Pierre Léaud), in Paris during the summer of 1972. Alexandre is poor and financially dependent on his mistress, Marie (Bernadette Lafont). Despite the comfortable aspects of this relationship, Alexandre is not happy as he is still in love with Gilberte (Isabelle Weingarten), his ex-girlfriend. Shortly after a disappointing encounter with Gilberte, Alexandre picks up a girl, Veronica (Françoise Lebrun), whom he notices sitting outside the Left Bank café frequented by the Existentialists, Les Deux Magots. The young woman becomes a central figure in his life and on Marie’s request he introduces them to each other.

Although the events of May 1968 had changed attitudes towards sex, marriage and the family, the “sexual revolution” was still a highly controversial issue in France at the time of the film’s release. It was only in the following year, and under political pressure in the wake of 1968, that the newly-elected neo-liberal government of Valéry Giscard d’Estaing implemented a series of much awaited reforms. The “age of majority” was brought down from 21 to 18, a Ministry of Women was created, the pill was made available to minors without parental consent and abortion finally legalised. 1973-4 is also when the first oil crisis brutally hit the French economy. France, like all its Western counterparts, was subject to a brutal recession that led to high unemployment and a new politics of austerity. La Maman et la Putain is therefore set in the context of a national moral and economic crisis: the main character is unemployed, something virtually absent on French screens since the 1930s. It was also a time of political disillusionment when the generation that had been actively involved in the events of May 1968 realised that the social reforms had not really transformed the basic structures of French society.

With its location shooting in the existentialist cafés of Saint-Germain-des-Près, and its accurate recording of the verbal mannerisms of young Parisian intellectuals in the 1970s, the film is something of a document and a re-examination of the “May revolution”. As critic Serge Daney wrote in his obituary for Eustache in 1982, thanks to La Maman et la Putain, people will remember what it was like in Paris for the young generations in the aftermath of May 1968 (2). For its probing of the disappointment of that generation, the film has assumed cult status, a reputation which extends to Eustache who is generally considered in cinephile circles as a doomed and unfairly neglected artist.

In the year that followed the director’s death, the French literary magazine Les Nouvelles Littéraires paid a special tribute to Eustache by devoting a series of articles to La Maman et la putain. In one of the articles, Jean Douchet mentions that Eustache used to describe the film as “a string of apparently insignificant events”. When discussing his reasons for making the film, Eustache also stated that one of his ambitions was to show how, in a person’s life, decisive moments are often immersed in a continuous flow of trivial actions and do not necessarily stand out as significant turning points.

People who knew Eustache always insisted on the autobiographical quality of the film and on the similarities between Alexandre’s love life and Eustache’s personal experience with Francoise Lebrun who, in the film, plays the part of Veronica but, like Gilberte, was in real life a university lecturer before starting a second career in film. But like the nouvelle vague directors before him, Eustache creates a modern and personal style to deal with contemporary and personal issues in a mode that transcends realism and autobiography. In La Maman et la putain this is achieved by using a very poetic and declamatory form of dialogue that works as a counterpoint to the realistic, documentary-like images. Eustache once declared that he wanted to put the art of conversation to the test in his film. Conversations between characters are indeed the film’s backbone. However, despite giving an impression of spontaneity, the characters’ words were in fact very carefully scripted and there was no room for improvisation during the shooting. All the long monologues were read out by the actors who had a piece of paper in their lap or a board in front of them in order to make sure they were saying the exact words of the original script. It is equally remarkable that Alexandre uses the formal and totally unrealistic “vous” when addressing his lovers. This form of address, which belongs more to the literature of the past than to the casual and egalitarian 1970s, also stresses, along with Jean-Pierre Léaud’s theatrical acting style, the fictional nature of the characters.

It has been argued that La Maman et la putain is a misogynist film (3). But this does not take into account the clear distinction the film makes between men and women. The three women are independent, professional young women. Gilberte is a university lecturer; Marie owns a fashion boutique in central Paris; and Veronica is an anaesthetist nurse at a renowned Parisian hospital. The fact that the women in Alexandre’s life work and that he is emotionally and financially dependent on them, makes Alexandre’s attacks on feminism less convincing. Veronica’s famous monologue in the film can be interpreted as a scathing attack on the sexual revolution of the 1960s and 1970s. But for many men the sexual liberation meant that, because of the existence of safer contraception, women were seen as more available for sex than they were before. This is why when Veronica, with her crude language, claims that the “only beautiful thing is to fuck someone you really love”, it would be a mistake to think that she is endorsing a reactionary view on women’s sexual freedom. Rather, she is rebelling against a new form of sexual exploitation masquerading as emancipation.

Eustache’s influence on French filmmaking can be traced today in the work of directors as different as Catherine Breillat and Olivier Assayas. Breillat’s still camera, long takes and close-ups, as well as the minute analysis of her female characters’ intimate emotions and sexuality are reminiscent of the way Veronica is filmed in La Maman et la putain. The cinema of Assayas, who like Eustache is a disciple of Rohmer, also portrays young people and groups of friends belonging to the intellectual Parisian milieu. Furthermore, the semi-autobiographical nature of his films bear a resemblance to Les Mauvaises fréquentations (1963) and La Maman et la putain in that they focus on the male character and adopt his point-of-view while using a semi-documentary approach. In this respect, Assayas can be seen as a disciple of Eustache whose films question the relationship between documentary, fiction and autobiography.

Even after the unexpected commercial success of La Maman et la Putain, Eustache complained regularly of feeling stuck in an intellectual ghetto. This perception of the elitist nature of Eustache’s work is the result of a confusion between cause and effect: Eustache’s films were either too short or too long to please distributors. Because his films shunned established mainstream film conventions, they were relegated to the margins.

As a consequence, for most of his career, Eustache, who always dreamed of becoming a great director with a wide popular audience à la Jean Renoir, felt unfairly treated by the film industry. When he shot himself in the heart at the age of 42, some blamed the French film production system for his death; others referred to the traumatic events represented in La Maman et la Putain. Before him, the woman behind the character of Marie had killed herself after the film’s release.

As for Jean Eustache, he just left a note on his bedroom door: “Si je ne réponds pas, c’est que je suis mort”. He also left us a unique oeuvre and a masterpiece.