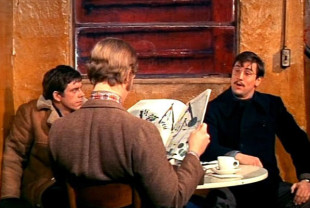 Released in 1968, Greetings is both an important early product of the New Hollywood as well as the first major work of director Brian De Palma. Although De Palma remains predominantly identified with later commercial successes such as Carrie (1976), Scarface (1983), and The Untouchables (1987), Greetings provides significant insight into the director’s early career. Produced on a budget of under $50,000, it exemplifies an era of low-budget independent filmmaking characterised by the work of John Cassavetes, George A. Romero, Monte Hellman, and others. Prior to the film’s release, De Palma had already completed a number of short works as well as two feature length projects. But Greetings marked an important step in the director’s artistic evolution. It contains a challenging treatment of both form and content, revealing an aesthetic approach more closely related to such French New Wave directors as Jean-Luc Godard than Alfred Hitchcock (a key influence on his later work cited by many critics). It also engages in a satirical interpretation of key social and political issues relevant to the specific historical era of the late 1960s.

In his Senses of Cinema “Great Directors” entry on De Palma, Keith Uhlich notes the director’s often-neglected role as political humourist. He claims that “one thing often ignored in light of the Hitchcock criticism is the director’s pointed and cutting sense of humor” (1). Greetings demonstrates De Palma’s ability to utilise humour in a challenging manner. From the opening moments of the film, in which a television broadcast shows President Lyndon B. Johnson attempting to inspire American support for the Vietnam War with the line “I’m not saying you never had it so good, but that it true, isn’t it?” (echoing British Prime Minister Harold Macmillan’s words from a decade before), the film creatively merges humour with larger social and political concerns. As David Bartholomew points out, the film’s “main characters symbolize, or at least work through, the dominant themes of the era” (2). Although presented in a lighthearted manner, their actions touch upon significant topics of the era such as draft-dodging, representations of women within pornographic cinema, and the conspiracies associated with the Warren Commission following the assassination of John F. Kennedy.

In many ways, it is productive to view Greetings alongside two other De Palma films of the period: The Wedding Party (co-directed with Wilford Leach and Cynthia Munroe, filmed 1963; released 1969) and Hi Mom! (1970). Both films also utilise humour in creative ways. While the former places De Palma’s early attempts to work with cinematic comedy within a relatively straightforward narrative structure, the latter elaborates upon the abstract formal qualities and socio-political subtext that inform Greetings. Hi Mom! employs a decidedly darker sense of humour in its manner of addressing larger ideological issues, particularly within its “Be Black, Baby” sequences. It also functions as a sort of sequel to Greetings in its focus upon the Jon Rubin (Robert De Niro) character following his return from Vietnam. In many ways, Greetings bridges the gap between the two works. It reveals important elements of De Palma’s creative growth before the director’s move to a more commercial mode of filmmaking.

Greetings also contains a challenging approach to style very different from that informing De Palma’s more widely recognised works. It emphasises form over content in several ways. As Laurent Bouzereau notes, “with Greetings, De Palma’s style began to take shape; he was confirming the fact that he gave priority to visual concepts over a substantial plot” (3). The film’s extensive use of the jump cut, speeded up motion, and rapid editing strategies resembles the work of Godard as well as important American independent films of the period such as Easy Rider (Dennis Hopper, 1969) and There’s Always Vanilla (George A. Romero, 1972). It largely avoids a linear narrative structure in favour of a storyline that is continually disrupted by stylistic preoccupations.

Although very much a product of its time, Greetings still remains among the most important of De Palma’s early works. Its reflection of counterculture ideology as well as significant socio-political issues affecting the period place it apart from the director’s more well-known commercial films which typically rely upon Hollywood conventions. While De Palma continues to be most associated with his work in mainstream cinema, Greetings provides viewers with an intriguing insight into the director’s formative stages.