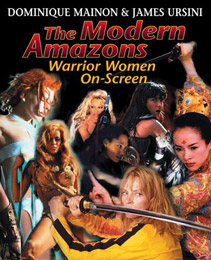 Our fascination with these physically strong women has also opened up a thriving industry dedicated to the study and appreciation of warrior women. This can be seen in books such as Tough Girls: Women Warriors and Wonder Women in Popular Culture and Girl Heroes: The New Force in Popular Culture (1) and numerous articles in scholarly journals (2), film and lifestyle magazines (3), and the art section of news dailies (4). There has also been an unprecedented amount of online material on the woman warrior, such as fan websites, fan fiction websites, webzines, web forums and weblogs. A Google search for “Buffy: The Vampire Slayer” alone produces 1.46 million website citations. Work and interest in the area of warrior women thus flourishes in both scholarship and popular appreciation. Hence it is very timely that Dominique Mainon and James Ursini have released The Modern Amazons: Warrior Women On-Screen, a passionate and entertaining encyclopedic volume of warrior women in film and television.

The Modern Amazons is an excellent resource for readers looking for a database of women warrior characters as it provides short narrative synopses. The book provides a good introduction to the various incarnations of the woman warrior, albeit with more emphasis on Hollywood productions. The Modern Amazons is also up-to-date with mentions of recent warrior women such as Aeon Flux (Charlize Theron) in Æon Flux (Karyn Kusama, 2005), Domino Harvey (Keira Knightley) in Domino (Tony Scott, 2005) and Selene (Kate Beckinsale) in Underworld: Evolution (Len Wiseman, 2006). Moreover, The Modern Amazons is a visual feast with almost every page filled with either film posters, publicity shots or frame stills of these strong women in action. The book also contains a chronology of films featuring women warriors and an actor index.

While this is a reference book, The Modern Amazons does not present these characters in a stagnant fashion. Rather, the women warriors are introduced to us in 14 thematically-driven chapters. The chapter “Fur Bikinis and Jungle Love”, for example, presents women warriors in barbaric settings, such as cavewoman Loana (Raquel Welch) in One Million Years B.C. (Don Chaffey, 1966) and Tarzan’s sexy female counterpart Sheena (Irish McCalla) in the television series Sheena: Queen of the Jungle (1955-57), while the chapter “Float Like a Butterfly, Sting Like a Bee” discusses women warriors in male-dominated sports such as boxing. Mainon and Ursini deem significant the women warriors in Kill Bill’s Deadly Viper Assassination Squad, and I found their lengthy character analyses of The Bride (Thurman) aka “Black Mamba”, Vernita Green (Vivica A. Fox) aka “Copperhead”, O-Ren Ishii (Lucy Liu) aka “Cottonmouth” and Elle Driver (Daryl Hannah) aka “California Mountain Snake” useful. This is perhaps because of Kill Bill’s box office success, the film’s intertextual referencing of popular culture (e.g. The Bride’s yellow jump suit is reminiscent of the one Bruce Lee wore in the posthumously-released Game of Death [Robert Clouse, 1978]) and the scholarly, critical and popular interest generated by these women (5).

Mainon and Ursinido not claim to be exhaustive in their presentation of warrior women characters. They do convince us, however, that the proliferationof women warriors in Hollywood cinema has strong currents of cultural and gender significance. The main theme running through this volume — most obviously and appropriately — is feminism. Mainon and Ursini point out that the woman warrior speaks to the importance of women in society, whether or not that society acknowledges their significance. In particular, Mainon and Ursini refer to early women warriors exacting vengeance, such as the giant Nancy Archer (Allison Hayes) in Attack of the 50 Ft. Woman (Nathan Juran, 1958) and its remake in 1993 (starring Darryl Hannah, directed by Christopher Guest), and prostitute Kelly (Constance Towers) in Sam Fuller’s The Naked Kiss (1964). These women challenge patriarchal norms by attempting to break out of the social constraints that emphasise female subservience: Nancy Archer transforms from a meek and mild woman into a powerful 50-foot presence, seeking revenge on her philandering husband, while Kelly challenges people’s impressions of her as a low-class sex worker by bravely exposing the town’s war hero as a child molester. More than being contemporary symbols for female empowerment and strength, such as present-day women warriors Xena and Buffy, these earlier women warriors were inspirations of defiance and future female emancipation.

Mainon and Ursini also emphasise the feminist element in their reading of sexy or scantily-clad women warriors. While they acknowledge that there is titillation in outfits such as Emma Peel’s (Diana Rigg) various tight body suits in The Avengers (1961-69), Wonder Woman’s stars-and-stripes bustier and shorts ensemble, and Charlie’s Angels’ barely there work clothes, Mainon and Ursini suggest reading these women beyond the superficial. While others have argued that women warriors are not simply subjects for the male gaze – such as Yvonne Tasker’s suggestion that Ripley’s striping down to her bra and panties in Alien was an act of pragmatism and desperation rather than titillation (6) – it is always useful to be reminded so.

The Modern Amazons also considers women warriors outside Hollywood cinema. In the chapter “Enter the Dragons”, Mainon and Ursini note that Hong Kong and Japanese martial arts cinemas have had a long history of featuring female characters skilled in fighting. They claim that it was as early as the 1920s, through films such as Red Heroine (Yimin Wen, 1929) and Swordswoman of Huangjiang (Shang Guanwu, 1930), that women warriors were protagonists in Eastern Cinema. In fact, the most commercially and critically successful Asian-language martial arts film to date is Crouching Tiger, Hidden Dragon (Ang Lee, 2000), a film featuring three female protagonists who are warriors.

Readers are also treated to some healthy discussion of the impact of Japanese and Hong Kong women warriors on Hollywood. Mainon and Ursini rightly claim that the woman warrior figure in Asian martial arts cinema has provided a template for contemporary Hollywood warrior women. For instance, the Japanese film Lady Snowblood (Toshiya Fujita, 1973) inspired the character of O-Ren in Kill Bill. Moreover, in a separate chapter “Girl Power”, Mainon and Ursini note that the American Cartoon Network television hit The Powerpuff Girls (1998-2004) is influenced by Japanese manga. I found guest writer David Koenigsberg’s chapter “Welcome to Japan, Round Eye! Now Die!: Sailor Moon, a Warrior Woman?” particularly interesting in its examination of the cross-cultural reactions of American audiences to this Japanese anime character.

One of the more fascinating aspects of The Modern Amazons is its situating of on-screen women warriors within history and mythology. The chapter “Fantasy, Myth, and Folklore”, for instance, traces the roots of warrior women to historical figures such as St. Joan of Arc. On-screen versions of this figure have appeared in films such as La Passion de Jeanne d’Arc (Carl Dreyer, 1928), Joan of Arc (Victor Fleming, 1948) and The Messenger: The Story of Joan of Arc (Luc Besson, 1999). Likewise, the chapter “Where No Man Has Gone Before” points out that some contemporary warrior women are modern reincarnations of earlier on-screen women warriors, such as LeeLoo (Milla Jovovich) in The Fifth Element (Besson, 1997) and her earlier manifestation as the robot Maria (Brigitte Helm) in Fritz Lang’s Metropolis (1927).

Mainon and Ursini also look at women warriors whose characterisations are influenced by animals traditionally associated with women. The animals examined here are the snake and the cat; the snake is associated with women through the Greek mythological character Medusa, while the “feminine” has often been linked with the feline. For instance, Santanico Pandemonium (Salma Hayek), the exotic dancer turned vampire killer and then vampire in From Dusk Till Dawn (Robert Rodriguez, 1996), uses a snake in her act. In “Superheroes and their Archenemies”, Mainon and Ursini discuss the influence of cats on the look and form of women warriors, with particular reference to Batman’s nemesis Catwoman in both the television series Batman (1966-68); and on the big screen in Batman Returns (Tim Burton, 1992) and Catwoman (Pitof, 2004).

The Modern Amazons is an easy-to-read book for anyone interested in on-screen women warriors. It does not present complex arguments or theories but rather, simply introduces us to the numerous warrior women in existence in film and television. Perhaps the real significance of this collection is the sheer volume of women warriors in the history of film and television, which is testament to their impact on popular culture.