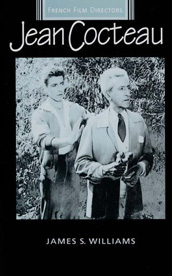 In his article, “Resurrecting Cocteau: Gay (In)visibility and the Clean-up of French Culture” (1), James S. Williams argues that there has been a concerted effort in France to forget Jean Cocteau the gay artist, and remember only Cocteau the interdisciplinarian. As an example, Williams uses the 2003 exhibition at the Centre Georges Pompidou, Jean Cocteau: sur le fil de siècle, in which the curatorial choice was made to place Cocteau’s erotic drawings in a separate section, with advisories to the public. In so doing, they made (for Williams) “a central issue of the one element that Cocteau did not, in fact, have a complex about: the free-flow of his sexuality” (p. 321). Certainly, when I saw the exhibition at the Musée des beaux-arts in Montréal (2), the sequestering of the drawings seemed a pity. They were the strongest pieces in the show – along with his film works, of course; an oversized, original poster for La Belle et la bête (Beauty and the Beast, 1946) was particularly impressive.

Between the drawings and the poster, these works showed the best side of Cocteau: loose, saucy, bold, camp. Williams’ newest book, Jean Cocteau, a monograph for the French Film Directors series published by Manchester University Press (3), is concerned exclusively with Cocteau’s films – rather than his writing, drawing, sculpture, or what have you – and Williams has taken it upon himself to re-emphasise Cocteau’s sexuality. This focus should be a boon; and at times, it is. There is a very careful account of Orphée (Orpheus, 1950), considering it exegetically, formally, and generically (Williams is generally very good on genres, maintaining that Cocteau always combined them rebelliously). Although Orphée has been regularly introduced in many publications, Williams offers enough background to serve an undergraduate reader, which is part of the book’s aim, and sufficient detail to interest the Cocteau scholar, which is another. He is occasionally and elaborately witty. He is perceptive about Cocteau’s influence, picking through the zeitgeist for the Coctelian. His chapter on Cocteau’s collaborations is nicely navigated and incisive about Jean Marais; and his digressions on Cocteau’s collaborationism are perhaps apologetic, but never defensive.

This last quality – a sufficient distance from his subject – is unfortunately lacking elsewhere in the book, and its absence creates and contributes to a number of problems where it need not. Hyperbolic auteurist appraisals of Cocteau are frequent: his oeuvre is “one of the most complete artistic studies of the male body” (p. 12); also, “one of the most sustained, quasi-scientific explorations of time […] in the history of cinema” (p. 16); furthermore, the mixed genres in Orphée “come together in almost perfect harmony” (p. 107). Evaluations of this kind have their place, but Williams is often relying on Cocteau’s word as a source for aesthetic judgement. When considering the power of the reverse-motion cinematography in Le Testament d’Orphée (The Testament of Orpheus, 1960), he decides that the “whole mysterious effect is poetry itself, as Cocteau explains” (p. 163).

Moreover, and more detrimentally, this reliance on Cocteau’s account sometimes contradicts the history Williams presents in the rest of the book. The most obvious instance of this occurs in the final chapter, where Cocteau’s remark “that all his films, with the exception of Le Testament […] were asynchronous with their period” is taken as proof of same (p. 186). This suggestion is made after earlier chapters have confirmed Cocteau’s receptiveness to contemporaneous artistic movements. A lengthy (and very interesting) section about accusations of plagiary levelled at Cocteau from the Surrealists over Le Sang d’un poète (The Blood of a Poet, 1930) makes that connection clear. Likewise, Williams notes the “panning shots and use of handheld camera betraying the contemporary influence of Italian neorealism” in Orphée (p. 120).

Unfortunately, the problems in Williams’ text do not all come down to Cocteau’s sway. There is anachronism: a reference to a Georges Méliès film (its title not given) from the 1910s “where a character is filmed by a television company” is vexing (p. 68). There is structural awkwardness: the third chapter, by far the longest, is something of a Coctathlon, dealing with six films where other chapters focus on one; this also results in another chronological blunder with Le Testament being covered before Orphée. And then there is dabbling in sometimes dubious (and always fruitless) psychoanalytic etymologising: is Le Testament usefully a reference to testes, or the Sphinx to sphincter?

One is left with a sense of opportunities missed. Cocteau’s leading place in the history of France’s film production is frequently hinted at – La Belle et la bête is reported to be “one of the first encounters in French cinema between experimental art cinema and the mainstream” (p. 65) – but seldom developed. There are theoretical avenues unexplored, too, including a very intriguing note about Walter Benjamin and Cocteau’s similar sense of time and history, but it remains merely a note. That Williams is such an attentive writer, his knowledge of Cocteau so evident, and the series editors at Manchester University Press ordinarily so thorough, makes the unevenness of this work perplexing, and, one hopes, no more than a temporary lapse for both.