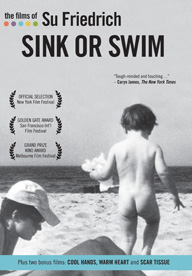 Su Friedrich is one of the most important figures in the generation of filmmakers who changed the course of American avant-garde/avant-garde film in the 1980s. In contrast with the predominantly formalist and apolitical “visionary” films of the American avant-garde from the 1940s to the 1970s, these filmmakers openly engaged with contemporary social, political and cultural issues while maintaining the avant-garde tradition of pushing the boundaries of cinematic form and content. Feminism and lesbian desire and self-realization figure prominently in Friedrich’s work but, with the exception of her advocacy documentary The Lesbian Avengers Eat Fire, Too, her films and videos resist easy categorization, and because she draws upon a wide range of formal techniques and employs a variety of formats (from Super-8 and 16mm to several different kinds of video) there is no clearly marked Friedrich style of filmmaking. She goes where her life and interests lead her, which makes all of her work, in a general sense, autobiographical.

Four films – Gently Down the Stream, Sink or Swim, The Rules of the Road, and The Odds of Recovery – are overtly autobiographical, but each differs radically from the others in form and specific subject mater. For the early, silent Gently Down the Stream, Friedrich drew upon her dreams for brief, but powerful, erotically charged texts scratched, word by word, into the film’s emulsion. In keeping with the dislocated associations of dreams, the relationship for the film’s words to its images is indirect and metaphorical, rather than literal and illustrative.

In Sink or Swim, a young girl recounts in voice-over a series of telling moments in Friedrich’s life, particularly those involving her father, who divorced her mother and “deserted” the family while Friedrich was still quite young. While the girl’s account maintains a narrative coherence in its portrayal of Friedrich’s mental and emotional life as she grows up and comes to terms with her deeply ambivalent feelings toward her father, the images seldom illustrate the denotative meaning of the girl’s words; instead, they help to extend their implications into metaphoric, symbolic, and even mythic, realms of signification. The film’s formal inventiveness and intricacy of cross-references and allusions make it, in my view, her strongest work and one that amply repays multiple viewing – which, thanks to the DVD version, is now possible.

While Rules of the Road is less “avant-garde” than Gently Down the Stream and Sink or Swim, it nevertheless demonstrates Friedrich’s ingenuity in translating autobiography into cinematic form. Shot after shot of old station wagons parked and travelling through the streets of New York create a theme-and-variation accompaniment for Friedrich’s narration of the role a 1983 Oldsmobile Cutlass Cruiser played in her relationship with her girlfriend – even after she and her girlfriend break up. It is a clever and touching film, shot with a sharp eye for the subtle range of colours and textures offered by old cars and urban environments, and edited with a sure command of cutting rhythms and audio-visual relationships.

The Odds of Recovery is the most up-close and personal of the autobiographical films. Friedrich appears in front of the camera for substantial portions of the film as she goes through a series of consultations and examinations in New York hospitals. With varying degrees of bemusement, frustration and anger, she addresses the camera directly to recount the history of her medical problems, including six operations, and their effect on her life generally and her sex life in particular. The result is a candid, courageous self-portrait, equally successful in avoiding exhibitionism and self-pity. It gains in depth of meaning by being interwoven with other footage depicting Friedrich’s life outside of hospitals and examining rooms. Two complementary and symbolic activities stand out: gardening and embroidery. Along with a number of shots of flowers and vines in a roof-top garden and Friedrich at work in the garden, there are shots of her embroidering a long, sinuous vine with a variety of brightly coloured blossoms, blossom-like shapes suggesting internal organs, and leaves with dates corresponding to the low points in her medical history: a “1985” leaf next to an “Abscess on ovary” leaf, a “1989-99” leaf next to a “High prolactin level” leaf, etc. The embroidered vine, like the film itself, distils messy life into the orderly patterns of art. 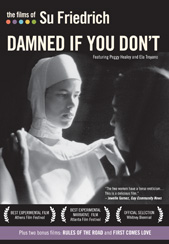 Of the remaining films, the most controversial – at least when it appeared – is Damned If You Don’t, a lesbian love story in which a woman successfully seduces a not-unwilling nun (the film ends with the two in bed making love). Set against this mini-narrative is found footage from a 1940s melodrama about the travails and temptations experienced by nuns in a convent. It is watched on a television by the nun’s seducer while a woman, in voice-over, describes and makes wry comments on the films’ plot and characters. A third strand is Friedrich’s own footage of actual nuns going about their business on city streets, and in churches and convents; a fourth is voice-over quotations from the book, The Life of a Lesbian Nun in Renaissance Italy; and a fifth is enigmatic, yet strangely poetic, images of a swan, a water snake and white whales. Although these strands create interesting relationships, they do not – for me, at least – fully cohere into a unified work of art. Nevertheless, the film is important as an early example of a feminist filmmaker’s refusal to excise the visual pleasure offered by shots of a woman’s body, and as an irreverent exploration of the intersection of piety and sexuality–prompted, at least in part, by Friedrich’s own experience of being educated by nuns during the years she was discovering her own sexual orientation.

That covert autobiographical element comes closer to the surface in Hide and Seek, a combination of interviews with lesbians recalling their early sexual awakening, found footage from stilted, conventional sex education films from the 1950s and ’60s, and a fictional narrative about a tomboyish pre-adolescent, Lou, and her school friends. The film does much more than implicitly critique the conventional, heterosexual point of view of the educational films and their efforts to instil an extremely limited concept of what constitutes “normal” sexual behaviour. Through the interviews, it celebrates the variety of ways these lesbians discovered and expressed their sexuality, the good humour with which they tell their stories, and the psychological insights those stories include. It also explores the open borders between friendship, intimacy, nascent sexual awareness, and social bonding among Lou and her friends. It is an educational film in the best sense of the term.

Friedrich’s technique of mixing diverse film sources first appears in The Ties That Bind, which is also her first film with sound and the first to straddle the border between avant-garde and documentary film. In voice-over, Friedrich’s mother vividly describes growing up in Nazi Germany (her family deeply disapproved of the Nazi régime, but did not actively oppose it), experiencing the war years and the Allied occupation, marrying an American soldier, Paul Friedrich, and moving with him to Chicago (where she still lives). The visuals include home movies of the young couple after their move to the US, archival footage from war-time Germany, Friedrich’s own Super-8 footage shot during a trip to Germany, extensive footage of Friedrich’s mother shot at the time the film was made, and Friedrich’s questions (scratched into the film’s emulsion) that prompt her mother’s reminiscences. Friedrich’s editing and her mother’s voice are the formal ties that bind the material together in a compelling blend of history and biography. 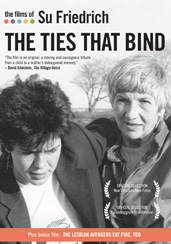 In an interview in Scott MacDonald’s A Critical Cinema 2, Friedrich remarks, “To me, the most fantastic part of constructing a film is taking many disparate elements and making some sense out of them, making them work together and inform each other.” In her best-known works, Friedrich accomplishes this feat over and over again, as I hope the preceding discussion has indicated. Certainly, one of the pleasures offered by Friedrich’s films is the opportunity to discover formal, thematic, metaphoric and symbolic relationships among the diverse audio and visual ingredients the filmmaker chose to work with.

But as Rules of the Road illustrates, Friedrich’s editing skills serve equally well when she works with relatively uniform audio-visual material, as is also the case with First Comes Love, a quasi-ethnographic study of the costumes and rituals (formal and informal) of conventional church weddings. The soundtrack is composed of fragments of popular songs about love–requited, lost or denied. Friedrich’s cinematography (some of the best in her entire œuvre) and editing (a textbook example of cutting images with – and against – the rhythms of pop songs) make First Comes Love Friedrich’s most “entertaining” film and, therefore, a perfect vehicle for a statement about same-sex marriage. Half way through the film, between a shot of a couple exchanging vows in front of an ornate altar and a shot of them starting back up the aisle, Friedrich inserts a statement about the inability of same-sex couples to be legally married, and, in a slow scroll, lists every country in the world where that is the case (or was the case in 1991). Following the final shot of the film – a boy sweeping up rice on the street – we read, “In 1990 Denmark was the first country to legalize homosexual marriage.”

Outcast Films, the distributor of The Films of Su Friedrich, describes itself as “dedicated to the fair and equal representation of media made by or about the diverse Lesbian, Gay, Bisexual, Transgender community”. While Friedrich’s films fall within that broad category, their importance extends well beyond it, and an audience capable of appreciating them is not limited to the LGBT “community” but includes anyone interested in avant-garde film and the more experimental strains of documentary film. And while each DVD can be purchased individually, it takes all five to fully demonstrate the range and strength of Friedrich’s work over the past 25 years.

In addition to including two or more films (as listed at the beginning of this review), each DVD includes Friedrich’s complete filmography, and, for the longer, major works, English and Spanish subtitles. Purists (like myself) will grumble about a “softening” of the film image when transferred to video (only The Lesbian Avengers Eat Fire, Too and The Head of a Pin were shot and released on video), but the quality of the images throughout is acceptable, if not ideal. Sound quality varies considerably, at least on my low-tech home video set-up. Recorded interviews and synch sound apparently recorded with microphones mounted on the camera tend to be mushy and occasionally indecipherable (that’s when I resorted to English subtitles). But these are relatively minor complaints about a collection representing some of the best work of the post-1970s generation of American avant-garde filmmakers.