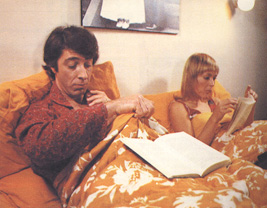 Certain films are like time capsules, or so they seem to us in hindsight. Libido (1973) being a case in point. As a four-part film with episodic variations on a theme, it has its antecedents in European portmanteau films such as Les Sept péchés capitaux (The Seven Capital Sins, 1962), RoGoPaG (1963) and Amore e rabbia (Love and Anger, 1967). For those of us discovering – or rediscovering, as the case may be – the film some thirty plus years since its initial release, we cannot but be surprised with the names associated with the production. They read like a roll call for the so-called New Australian Cinema, which at a time signified more a dream than a reality. It is little exaggeration to call Libido a kind of creative crucible from which many significant facets of new industry emerged.

A few examples: the episode titled “The Priest” was director Fred A. Schepisi’s first real foray into filmmaking, his background having been in television commercials. Written by Thomas Keneally, this story of the conflicted sexual passions of a priest led to his much-acclaimed début feature on more torments of the flesh, The Devil’s Playground (1976), and then further collaboration with Keneally on The Chant of Jimmie Blacksmith (1977), a film whose searing violence and depiction of racist colonial Australia stands comparison with The Proposition (2006). Though an established novelist even at the time, Keneally will find ‘movie fame’ as the writer of the book that will become Steven Spielberg’s Schindler’s List (1993).

The episode “The Family Man” was written by David Williamson and features a young Jack Thompson in a lead role. It is a study of misogyny, an early dissection of the sexual psyche of the Australian male in the face of the rising wave of feminism. Williamson’s reputation as a pre-eminent dramatist was yet to be established and “The Family Man” provides an early glimpse of a theme that he will continue to explore in both plays and screenplays. Subsequently, Williamson’s original screenplay for Petersen (Tim Burstall, 1974) will be instrumental in shaping Thompson’s screen persona. And further staring roles in films such as Sunday Too Far Away (Ken Hannam, 1975) and ‘Breaker’ Morant (Bruce Beresford, 1980), to name but two, will make of him a cultural icon of the New Australian Cinema.

Petersen’s director, Tim Burstall, was also a contributor to Libido and his episode, “The Child”, looks now atypical of the films that define him. For a time, Burstall staked his claim to a contemporary populist cinema of social critique, ocker comedies such as Stork (1971) or Alvin Purple (1973), for example. On the other hand, “The Child” has its strongest affinities with art-house fair such as Joseph Losey’s The Go-Between (1970), with which it shares its period setting and the theme of the trauma of the young in the face of adult sexuality and duplicity. Though it lacks the grace and sophistication of a Picnic at Hanging Rock (Peter Weir, 1975), in its own way “The Child” looks towards the period costume genre that will come to dominate much local production in that decade.

Watching Libido today is to glimpse the embryonic stages of the Australian new wave, to see its early promise and freedom. Too little of Australian film history is written by those who were direct participants, by those who helped shape and give it direction. We are grateful to co-executive producer and director of the episode, “The Husband”, John B. Murray, for providing a first-hand account of the genesis of Libido.

And so, briefly, to the international front. The appearance of the new Hou Hsiao-hsien film – though regretfully yet to find theatrical release in Australia – is always worthy of attention. We take the opportunity to not only assess the merits of Zui hao de shi guang (Three Times, 2005), but a number of his other films of recent years so as to spotlight Hou’s “optics of ephemerality”, as author Charles Warner so aptly puts it.

On recent films, Brokeback Mountain has received so much critical commentary it seems hardly in need of more, yet we believe that Dennis Grunes’ article is an honest and fresh take on the film. Our thanks to Jon Jost for bringing our attention to Grunes’ work.

Special thanks to Sally Shafto, too, not only for her own article to the “Cinema and the Pictorial” section, but also for drawing our attention to Dominique Païni’s article and translating the work from the original French. Thanks also to our colleague Michelle Carey for proposing the idea of covering such as a theme and facilitating matters.

On a final note, for quite some time we have been flirting with the idea of introducing a separate and on-going DVD review section. With this issue we have taken our first modest step in that direction. We hope to see it grow in range and scope in subsequent issues, and with that goal in mind we welcome contributions.