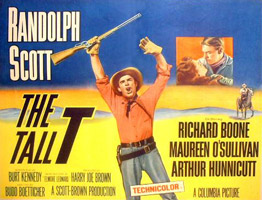 This is a captive/survival story. The hero, Pat Brennan (Randolph Scott) is stranded afoot in the middle of the desert. He is picked up by a passing stagecoach driven by his friend Rintoon (Arthur Hunnicutt). The coach has been specially chartered by pompous Willard Mims (“He’s a bookkeeper”, Rintoon explains) to take he and his new wife, Doretta (Maureen O’Sullivan), on their honeymoon. They stop at a swingstation (1). Three outlaws, Frank Usher (Richard Boone), Chink (Henry Silva), and Billy Jack (Skip Homeier) kill Rintoon and take the remaining three prisoner. A ransom scheme involving Doretta’s rich father is hatched, Willard leaves with the demand for money, and Brennan and Doretta have to outwit the killers in order to survive. It’s that simple.

The Tall T is part of three larger phenomena: the last great cycle of western films made in Hollywood; the refashioning or re-invention of the western by fiction writers and their filmmaking counterparts; and a series of westerns known as the Ranown “cycle” (after their production company, a partnership between RANdolph Scott and Harry Joe BrOWN), four of which are a continuing meditation, rearranging a small array of elements in varying patterns. These are Seven Men from Now (1956) (2), The Tall T, Ride Lonesome (1959), and Comanche Station (1960). All star Scott, are directed by Budd Boetticher, written by Burt Kennedy, scored by Heinz Roemheld, shot on Lone Pine locations, and (with one exception) photographed by Charles Lawton, Jr. This makes for a remarkable consistency across the series, which is an outstanding example of studio B-picture production.

Since the early days of Anglophone auteurism in the 1960s, these films have had a canonical status and prompted some excellent critical writing (and most of what follows is deeply indebted to those writers) (3). The Tall T, along with the others in the cycle, it must be said, are films for connoisseurs, for viewers interested in westerns and familiar with the genre’s history, traditions, iconography, themes, plots and gestures. The Tall T is not parodic, or ironic in the current sense, or self-referential, or self-conscious, or subverting, or postmodern (nor pretentious or sentimental, either), but everything in it is conscious, considered, thought out, condensed and precise. The filmmakers (including the actors) are creative minimalists: they spin more out of very limited resources – simple plot, few characters, few locations, few events, with the only spectacle being the bleak, grand desert and mountains of Lone Pine (and only one interior – a cave).

Jim Kitses’ key critical perception is that the Ranown films are deep (and dark) works of comedy; this is most immediately evident in Tall T’s language. Dialogue is assembled from 19th century frontier words, phrases, place names and the like, mixed with contemporary 1950s usage. This is edited down into short, sharp lines exchanged in funny, edgy, insinuating dialogue in which something is always submerged but on the move. This dialogue is rich with phrases and images which stick in one’s mind long after seeing the film. The result is a highly stylised language which isn’t a replication of 19th century speech and diction, nor is it contemporary 20th century usage: it’s the language of a specific fictional western world, a world and a language of which Boetticher and Kennedy, in films like The Tall T, were major creators. Their 1950s work in this area provided the foundation for Sam Peckinpah’s baroque elaboration of the form in the 1960s (4). (Heinz Roemheld’s music is particularly useful in supporting this activity. The music is ambiguous, playful, not interested in cueing the viewer to emotion, mood, or impending events.)

One can’t watch Tall T without being struck by the actors and their line reading (let alone the elegance and variety of their body acting). Adapting Elmore Leonard’s story “The Captives” (5), Boetticher and Kennedy transferred all Leonard’s dialogue, word-for-word, into The Tall T. Reading “The Captives”, the dialogue is striking, it impresses – not unusual for Elmore Leonard, it’s one of his most admired skills. But seeing what the actors do with these lines, giving them rhythm and shape and concrete specificity, is to appreciate the remarkable collaboration between Boetticher and his actors. There’s not a dead or even a plain line in the film: they all sing. This craft and care and shared infectious delight are equally distributed among all the actors – they all get to play (about a well in which the bodies of three innocent murder victims have been tossed, and in response to the proposal that more be added, a minor character muses, “That well’s gonna be chock-a-block”). Even a risky line, “Some things a man can’t ride around”, slides perfectly into place as Scott caresses it. (Leonard said that of all the actors in all the film adaptations of his work, only Richard Boone got the dialogue right, in The Tall T).

Boetticher and Leonard both acknowledge the deep influence Ernest Hemingway had on their work (Boetticher was a bullfighter in Mexico before going to Hollywood), but it comes through differently, taking different directions (6). Leonard starts his story as Brennan, afoot, thumbs a ride on Rintoon’s stage. Kennedy and Boetticher don’t get there for 22 minutes of The Tall T; instead, they open with Brennan arriving at the swingstation on his way into Contention and talking with the station man and his little boy (“Pa, what’s it like in Contention?” (7)“There’s people there, Jeff, lots of people.”) This is followed by a scene in Contention, where Brennan meets Rintoon and the Mimses, then one at Tenvoorde’s ranch, played for slapstick, as Brennan fails to ride a bull to win a bet and ends up in a trough. This entire opening part of the film is played as jaunty, joshing comedy and light banter, creating a collision of tone and mode when the four innocents are captured by the outlaws.

Leonard kills off Frank Usher as the penultimate action in his story, leaving Chink the last gunman to be disposed; Kennedy and Boetticher switch this around – quite logically, because they’re interested in paralleling the Brennan and Usher characters and extending their thrust-and-parry conversations to the very end (it’s been noted many times that Usher is, in many ways, a much more likeable, interesting and human character than Scott’s Brennan). The final change Boetticher and Kennedy make comes at the end of the film. Here’s Leonard’s version, all Brennan’s interior monologue, the last lines of the story. He has just killed Chink.

He suddenly felt tired, but it was the kind of tired feeling you enjoyed, like the bone weariness and sense of accomplishment you felt seeing your last cow punched through the market chute.

He thought of old man Tenvoorde, and only two days ago trying to buy yearlings from him. He still didn’t have any yearlings.

What the hell do you feel so good about?

Still, he couldn’t help smiling. Not having money to buy stock seemed like such a little trouble. He saw Doretta come out of the trees and he walked across the clearing.

Boetticher and Kennedy have Doretta crying after the final killing of Usher. Brennan says to her (the last line of the film): “C’mon now, it’s gonna be a nice day.”