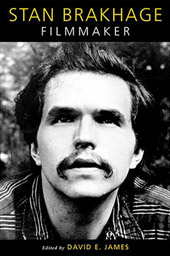 Stan Brakhage didn’t invent the avant-garde cinema. But he certainly reinvented it. Under his tutelage, it finally became a fine art. Joseph Schumpeter would have called it “creative destruction”, a new order suddenly replacing the old. In any case, after Brakhage, the old avant-garde suddenly became an artefact, superseded by his new vision of cinema’s possibilities. And it was a glorious vision indeed, of a first-person cinema reflecting a new autonomy and freedom.

But Brakhage’s achievement cast a long shadow. When he died on March 8, 2003, no one had replaced him. Stan Brakhage: Filmmaker, a collection of essays edited by David E. James, is among the first efforts to reckon posthumously with his legacy. Unsurprisingly, it’s hardly definitive. More tribute than scholarship, it’s a hodgepodge of history, theory, poetry, criticism, and anecdote.

And yet, under the circumstances, such eclecticism is probably a virtue. Over the years, Brakhage has attracted a great deal of critical attention: positive, negative, and mostly inconsequential. Film scholars have an unfortunate affinity for sententious nonsense, and the avant-garde seems to encourage their worst impulses. By emphasising canonical studies and memorials over novel scholarship, James minimises the humbug. The result is a remarkable – and remarkably compelling – portrait of Brakhage as artist, theorist, and friend.

The collection begins with a quaint, vaguely patronising essay by Parker Tyler, praising a young Brakhage’s “tact”. Originally published in 1958, Tyler’s essay is now faintly comical, seeming to cast Brakhage as the Pat Boone of the avant-garde. And yet, despite his preciousness, Tyler still somehow captures Brakhage’s peculiar blend of radicalism and conservatism. Unlike many of his contemporaries, Brakhage was hardly iconoclastic. On the contrary, he respected – even venerated – his predecessors. And he avoided the cynicism endemic to the avant-garde. In the face of dialectical materialism and postmodernism, Brakhage remained a humanist. Few of his peers had the wisdom or courage to follow suit.

Brakhage made three films based on the Faust myth: Tortured Dust (1984), Confession (1986), and the Faust series (1987-89). P. Adams Sitney uses them to illustrate Brakhage’s unusual syncretism in “Brakhage’s Faustian Melodrama”. Brakhage’s daily life always provided the raw material for his films. And the Faust films were no exception, incorporating his traumatic divorce, discovery of new love, and memories of earlier suicidal impulses. But apparently, the notably literate Brakhage also incorporated elements from Gertrude Stein, Robert Duncan, Thomas Mann, and Paul Valery’s versions of the Faust myth. With his usual wit and sensitivity, Sitney traces these connections and others, analysing the evolution of Brakhage’s ideas while recognising his genius.

It’s notoriously difficult to adequately describe a Brakhage film, as the experience resists reduction to words. Paul Arthur’s “Becoming Dark With Excess of Light” is among the few successful examples. This precise and perceptive study of Brakhage’s Vancouver Island Trilogy – A Child’s Garden and the Serious Sea (1991), The Mammals of Victoria (1994), and The God of Day Had Gone Down Upon Him (2000) – perfectly captures their peculiar Arcadian languor. Brakhage’s last major photographed films, they reflect an unusual serenity. And Arthur’s careful descriptions economically evoke their subtle palettes and measured pace. More, he explains how the elements of each film contribute to the structure of the whole, providing a hornbook for viewers unfamiliar with the avant-garde and a model for other scholars.

Still, Annette Michelson’s seminal “Camera Lucida/Camera Obscura” best expresses Brakhage’s Promethean stature. First published by Artforum in 1973, it cemented Brakhage’s critical legitimacy. And it remains among the most eloquent and profound theoretical accounts of Brakhage’s achievement. After T.S. Eliot, Michelson suggests an artwork’s measure of greatness is its effect on its predecessors, rather than its successors. And she claims Sergei Eisenstein and Brakhage as the twin poles – the alpha and omega – of film art. According to Michelson, a filmmaker or critic’s failure to account for either “may be seen most indulgently as provincialism, must more exactly be termed unseriousness” (p. 38).

Michelson’s title alludes to the dialectic binding these two filmmaker-theorists together. Eisenstein’s “intellectual montage” turned ideas into images, literalising Erich Auerbach’s account of the epic form. Brakhage’s “metaphors on vision” turned perceptions into images, representing Roman Jakobson’s description of metaphoric language. By distilling every element of a film into an image, Eisenstein created an “Intellectual Cinema”. And by translating the experience of perception into film, Brakhage created a “Cinema of Vision”. Both transformed the cinema: Eisenstein by showing everything and Brakhage by showing what can’t be seen.

But gradually, Dworkin loses track of the film, and the essay devolves into chatter. The intriguing suggestions are overwhelmed by puzzling, pointless non sequitur. Ok, so du champ means “of the field”. But suggesting this coincidence connects Marcel Duchamp to Georg Christoph Lichtenberg’s study of electromagnetic fields is merely facile, the literary equivalent of numerology. And the essay collapses with Dworkin’s inexplicable paean to the photocopier collages of Jay Schwartz, an obscure Colorado artist. When Brakhage eventually reappears, he’s just another illustration from the theoretical combine of Gilles Deleuze, Paul Virilio, and Company.

Still, if Dworkin buries insight in nonsense, Tyrus Miller’s “Brakhage’s Occasions: Figure, Subjectivity, and Avant-Garde Politics” is far worse, using cliche to camouflage banalities. Or so one surmises, plucking nuggets of film theory conventional wisdom from the turgid morass. The opacity of Miller’s prose is truly impressive. A representative example: “The space of immanence – for example, that space defined by a Brakhage hand-painted film – is a thinking and experiencing that is going on, not in the head of a subject, whether artist or spectator, but precisely as an outside occasion, in the temporary, continuous, techno-imagistic-vital space in which both he and we commingle” (p. 186). The Maharishi does Hegel, I guess. Other bits recall the infamous Postmodernism Generator. For instance, Miller proclaims Brakhage’s work “stands at the juncture of two phases of radical desubjectification that are not just aesthetic strategies of an individual artist, but epochal characteristics of our biopolitical present: absorption into the immanence of universal life and assimilation to death” (pp. 192-93). Sounds awfully momentous. And means nothing at all.

Suspiciously, James himself seems more interested in class conflict than film criticism. His introduction provides a serviceable condensed biography. But he focuses more on cementing Brakhage’s radical bona fides than making sense of his artistic project, insisting Brakhage rejected “the languages of the Hollywood film and the capitalist mode of film production” (p. 15). In fact, Brakhage was never much of a class warrior. But James is awfully determined to gin up a revolutionary hero. It’s a shame, because when he gives the ideological hobby-horse a rest, he’s often spot on. For example, his own contribution, “Amateurs in the Industry Town: Stan Brakhage and Andy Warhol in Los Angeles”, is a first-rate historical essay.

The highlight of the collection is the selection of reminiscences by Brakhage’s friends, artists and filmmakers like Bruce Baillie, Chick Strand, James Tenney, and Carolee Schneemann. Particularly notable is Abigail Child’s “Notes on Sincerity and Irony”, as it epitomises the residual ambivalence to Brakhage’s legacy harboured by many of his successors. An avowedly “political” filmmaker, Child is frustrated by Brakhage’s conservative streak, but still admits a grudging respect for his accomplishments. As always, artists draw on the best materials at hand, ideology notwithstanding. They’ll be drawing on Brakhage for some time yet.