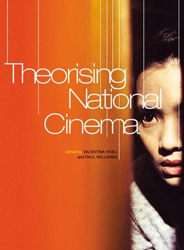 Theorising National Cinema begins with the editors’ introduction and is then divided into three sections: “Theories”, “Histories” and “Crossroads”. The “Theories” section is the shortest and contains three chapters on national cinema theory. Included in this select group is Philip Rosen’s 1984 article “History, Textuality, Nation: Kracauer, Burch and Some Problems in the Study of National Cinemas”, as well as editor Paul Willemen’s “The National Revisited” and Stephen Crofts’ “Reconceptualising National Cinema/s” (1). Rosen’s article engages many of the epistemic issues prominent in national cinema debates of the 1970s and ’80s. He focuses on issues of textuality and the question: “how does ‘national specificity’ manifest itself in films?” (p.9), concluding with a discussion of the relationship between national cinema analysis and psychoanalysis. Willemen is interested in the relationship between the national and the international, and between identity and subjectivity in socio-cultural formations. One of the most interesting elements of Willemen’s argument is his discussion of Mikhail Bakhtin’s idea of “creative understanding” (p.37). Willemen applies this idea to the way film spectators make sense of “other” national cinemas and the cultures they represent, and in turn draw on apparent differences to rethink their own culture. Willemen makes some interesting points, however generally this article is exceedingly academic and, as such, the uninitiated will have difficulty deciphering his arguments. The third theoretical article, Crofts’ “Reconceptualising National Cinema/s”, contrasts with Willemen’s style. Crofts’ chapter is an accessible resource, divided into short sections with subheadings that constitute a clear taxonomy of national cinema. Crofts briefly outlines what he considers to be the key elements that constitute world cinema, from European-model art cinemas and totalitarian cinemas to national cinemas that attempt to imitate Hollywood.

Disappointingly, the three theoretical pieces included in Theorising National Cinema do not reach the same depths or level of innovation found in comparable compilations such as Cinema and Nation and Global/Local (2). However, the “Histories” and “Crossroads” sections of Theorising National Cinema contain some really exciting ideas and theoretical contexts covering a range of national cinemas and television cultures. In the “Histories” section, we find essays on Italian, Irish, British, French, Russian, Chinese and Japanese cinema, as well as innovative writing on American film economics, South Korean Cinema and Palestinian television. Some of the essays in this section evoke abridged versions of the esteemed Routledge National Cinema Series, of which Susan Hayward is the general editor (3). For instance, in the Routledge style, Maria Wyke’s discussion of “Italian Cinema and History” is both detailed in its description and discussion of early Italian cinema, and skilled in offering an approach to Italian national cinema more generally. Alongside consideration of the more canonical national cinemas, such as the Italian or French cinemas, we find discussion of new cinemas. Martin McLoone’s essay on “National Cinema in Ireland” examines a cinema that has only emerged in the last 15 years, and has aided in the re-imagining of Ireland in the formidable shadow of globalisation. McLoone echoes Willemen’s concern with the relationship between the national and the international when he suggests that “Irish culture in general and Irish cinema in particular now inhabits some ill-defined space between the particular and the universal, between essentialist irrelevance and global insignificance” (p.89). McLoone’s concerns resonate with other small English language cinemas, including Canadian and Australian national cinemas. These small Anglophone cinemas have, as Crofts suggests, “sought to beat Hollywood at its own game – and overwhelmingly failed”, or alternatively, struggled against European cinema’s dominance of the market for art cinema (p.50).

There are also a number of chapters in this section which present national cinema readings of specific directors and films. In each case, the authors defend the value of contemporary, innovative approaches to national cinema studies and perform revisions of previous cinema histories. In “Ozu and the Nation”, Kathe Geist addresses the work of Japanese filmmaker Yasujiro Ozu in the context of Japanese national cinema. According to Geist, while Ozu’s work has been famously addressed in relation to aesthetics, a national cinema reading can still be appropriate. In the chapter on Hou Hsiao-hsien’s “Taiwan Trilogy” (A City of Sadness [1989], The Puppetmaster [1993] and Good Men, Good Women [1995]), Chris Berry revises his own observations about the emergence of a “postnational” cinema in Taiwan. Berry begins this revision by suggesting that “a ‘national cinema’ approach is too invested in territorial nationalism to adequately account for films such as these” and that “it is in this sense of the national grounded in the modern territorial nation-state that these films might be considered ‘post-’” (p.148). According to Berry, this should not mean an end to considering films in a national context, but it simply points to the need to redefine the national in the contemporary era. Indeed, he confirms “the national may not be what it once was, but neither has it disappeared” (pp.148-149). Overall, through his analysis of the “Taiwan Trilogy”, Berry manages a masterful redefinition of the “national” in national cinema theory that is able to capture the complexities of “the national in the transnational era” (p.156).

By contrast to the academic tone of the essays discussed above, the chapter entitled “The Hidden Conscience of Estimated Palestine”, written by Palestinian filmmaker Elia Suleiman, is somewhat poetic (4). Suleiman’s piece is a plea for greater freedom of representation on national television in Palestine. He calls for Palestinian television to transmit “images that bulldoze boundaries” and “interrogate the role of traditionalism, sexism and colonial discourses” (p.203). This intensely political essay struck a chord in me, for as I write this review a war rages in the region. Suleiman reminds us that national visual cultures not only reflect and represent the nation but also have the power to confront, shape and change.

Suleiman’s essay forms a transition between the “Histories” and “Crossroads” sections of Theorising National Cinema. In “Crossroads”, we find essays on Latin American, Arabic, African and Indian cinema as well as discussion of new ways of addressing Asian cinemas and European television cultures (emerging from the consideration of regional paradigms in national cinema studies). This section is concerned with new configurations of national cinema, transnational cultural flows, the shifting representation of national identities and the concurrent changes to national cinema studies. In his chapter “National/International/Transnational: The Concept of Trans-Asian Cinema and the Cultural Politics of Film Criticism”, Mitsuhiro Yoshimoto suggests that the idea of “Trans-Asian cinema” is symptomatic of academic reflexivity towards the theoretical assumptions that underpin traditional approaches to national cinema. Yoshimoto contends that the notion of trans-Asian cinema is deployed to avoid the essentialism of traditional understandings of national cinemas and to reconfigure approaches to national cinema to include regional sensitivity. These interesting ideas relate to Berry’s work discussed above, as well as those put forward in the chapter by David Morley and Kevin Robins. Morley and Robins speak of the reconfiguration of European identities in relation to transnational television cultures in the context of the European Union and ideas of American cultural imperialism (5). They contend that “New forms of bonding, belonging and involvement are being forged out of the global-local nexus” (p.295). Similar to Berry, Morley and Robins imagine national media scapes “beyond the terrain of physical geography” (p.296). The authors avoid reducing the complexities of European television cultures and once again revise national cinema and television theory.

Editors Vitali and Willemen have also compiled a bibliography which is divided into four sections: “General”, “Cinema and the National”, “National Cinemas” and “Journals”. This bibliography contains some useful and important references, although the “Journals” section and some of the “National Cinemas” listings are rather scant. The bibliography also has some odd omissions such as the recent and important book on “third” cinemas by Hamid Naficy, An Accented Cinema: Exilic and Diasporic Filmmaking (6). The section on Australian cinema is also very brief.

I may perhaps reveal a bias in pointing to another omission: the absence of a representative essay on Australian national cinemas. The bibliography entry and inclusion of (the University of Queensland’s) Stephen Crofts’ theoretical article “Reconceptualising National Cinema/s” do not fill this gap. Furthermore, the titles of Crofts’ chapter and John Akomfrah’s “On the National in African Cinema/s” highlight one more notable omission in Theorising National Cinema: the absence of the plural, “national cinemas” in the book’s title. Akomfrah suggests, “one should talk of African cinemas, in the plural, rather than about African cinema as a kind of genre” (p.274). The African continent consists of many nations; as such, one intuitively understands Akomfrah’s insistence on plurality. However, the plural has also become an important signifier of the more general complexity and fluidity of the “national” categorisation of cinemas. National cinemas are now commonly understood as fragmented corpuses of films, and thus intensely plural. Indeed, Vitali and Willemen demonstrate this plurality in their writing and editorial selection but, ironically, not in their title.

This is a dense and informative book and I am not able to do justice to its 21 chapters in this short review. But to conclude, I would like to stress the importance of the continued consideration of national cinemas despite the challenges to the discipline caused by globalisation, multinational capitalism and transnational cultural flows. If the selection of essays in Theorising National Cinema proves anything, it is that despite Hollywood’s dominance and the shifting cultures of production, distribution and reception, films from around the world continue to engage the national as well as the global, regional and local. The shifting and fragmented nature of national cinemas also requires that national cinema theory be continually revised, reconfigured and advanced, as it is in this book. It is very clear that the work showcased in Theorising National Cinema is of continuing importance for national cinema studies and global film scholarship.