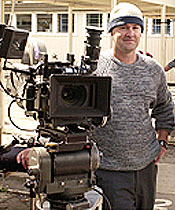 The greatest surprise of the 2004 San Sebastian Film Festival appeared to be a deep and plaintive film from America, yet it actually came from New Zealand. Like Clint Eastwood’s recent Mystic River (2003), In My Father’s Den links both the present and the past, and builds a complex story of family secrets with intensity, rhythm and control. Similar to Terrence Malick’s Badlands (1973), it is a film as poetic as it is crude. Internet was the best way for an interview with Brad McGann, connecting Barcelona with New Zealand.

Violeta Kovacsics: You have already directed some short films before. Though In My Father’s Den has nothing to do with a short, it is rather complex. Weren’t you afraid of directing such a risky film as a first feature?

Brad McGann: It depends how you define “risky”. For me, there are “good” and “bad” risks, and any first feature is going to be a risk by the sheer fact it’s a first feature. Something I would never risk doing, for example, is making something I didn’t fully believe in, or that hadn’t had sufficient enough time to develop or find itself. But given this was a film I believed in 100% as well as being something I felt had been thoroughly explored in development it reduced certain chances of it failing but by no means guaranteeing it. In other words, a lot of the risks had been assessed in the writing process, and discussed at length between myself and the producers (Trevor Haysom and Dixie Linder). We all had the same film in mind. Therefore any risks we took with structure, approach, characterisation, material etc. were calculated against the big picture, which we all felt we knew. Also, my favourite filmmakers are all people who have taken big risks, especially at the early stages of their filmmaking career when they were establishing their voice – Cassevetes, Bertolucci, Malick, Schlesinger, Tarkovsy, Truffaut – these are not the sort of people to sit on the fence or play an easy hand. For me, these kind of filmmakers act as a guiding light for someone like myself making their first feature because they remind you of what cinema is all about. I also felt comfortable knowing that Dixie Linder had produced The War Zone (Tim Roth, 1999), which was far, far riskier than In My Father’s Den in its subject matter, and, in my opinion, one of the top films to come out of Britain in the last ten years. 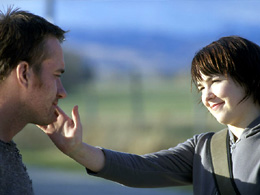 BMcG: What I liked about the book was that on the surface it was a crime story, but underneath it was about secrets, complicated and fractious familial relationships, the effects of physical and emotional isolation, and the tragic loss of potential in the death of a young person. It was also about people trying to reconcile themselves with the past, and how the past is very much a part of the present. These were really strong themes to play with. And I really liked the central friendship between Paul (a man in his 30s) and Celia (a teenage girl) – and how that could become a conduit for many conflicting and ambiguous thematic strands in itself. We live in a time where it is virtually impossible for an adult to befriend a child or someone in their teens, given the perceived danger. But it was this danger aspect that drew my interest, because I started thinking why it is that society in many ways severs contact between people from different age groups, and frowns upon them becoming intimate in any way. In saying this, I had no interest in exploring the sexual connotations of “intimacy”, but more an intimacy that occurs when two people begin to bare their souls to each other. And also the central character Paul – I liked that he was a character who in 99% of situations would never choose to disclose himself, but in this rare instance was opening up to another human, who just happened to be half his age. She was a part of him coming to understand himself.

The process of book to screenplay was really about how to make a book published in 1972 work as a film set and made in 2004. It meant updating and reshaping the material in order for it to work for a modern day audience. Letting go of the novel as a strict guide at second draft and bringing my own material to it was a really liberating process, and in many ways I see the final film as a “meeting point” between myself and Maurice Gee (the author) – a 50/50 kind of thing. The basic story, core material, characters, and themes are definitely Maurice’s, but have been “re-imagined”, I guess, by myself, 30 years later. Maurice gave me complete license to change anything in the book and never made me feel like his novel was sacred.

VK: The rhythm is one of the film’s assets. It takes you slowly to the story’s heart. Did you plan it from the outset or did it develop during the editing?

BMcG: I always planned for the film to be a slow-burner that shifted in and out of several timeframes. I didn’t want it to be dictated by genre but to be something that felt organic and that unravelled in a gradual and fluid manner. There was an asymmetry in the script that I tried to maintain, and Chris Plummer who edited the film really tapped into that aspect. He comes from a musical background and has a really good instinct for rhythm (he was a drummer) but also had a strong sense of the film that I wanted to make. I guess the end film is a combination of what was planned and what came up in the editing room. I am very open to change and shifting the film away from the script if it makes for better viewing or more interesting story telling. And what I discovered is that the film takes on a rhythm all of its own regardless, and you have to listen carefully to what that rhythm is rather than smother it with what you intended it to be. I think Chris really helped discover the rhythm – the subtleties and nuances – because he does have that special ability to “hear” the musical quality that underlies a story that may not initially be “audible” to the director. But I really love that we kept the asymmetry and the risky quality in terms of the film’s structure and narrative layout.

VK: There is a lot of misery and sadness in the story, but it never falls into morbidity. How did you work that?

BMcG: I guess it just comes down to how you see life. I do see life as being an experience in which you will inevitably encounter misery and sadness along the way, but I don’t see life as being morbid. To me it’s about shadow and light. You can’t have hope without experiencing despair, or know what joy is without having experienced pain. And I think in this film there is a subtle exploration between “shadow” and “light” – the joyous moments and the sadness that underlies the human condition.

VK: Music plays an important role. Not only through Patti Smith’s song but also Celia’s music. How did you choose the music?

BMcG: Mostly instinctively. Some of the artists/tracks were locked in at script stage, such as Patti Smith, Kiri Te Kanawa, Fetus Productions, whereas others fell into place during the editing process, and others in the final stages of post (with assistance from EMI London). I love music – almost to the point of obsession – and always knew that the film would have a strong musical element to it, not only in its presence, but also in the way that it linked to theme and story, and the time period it was meant to evoke. It also helped weave together different timeframes and provided a short hand way of painting some minor characters such as the teenage Jackie and teenage Paul. The trouble was that I had so many potential songs I wanted to experiment with. In the end, I liaised mainly with Chris to make the final choices (who has similar taste to me and so happened to be a huge Patti Smith fan, especially the album Horses) and Dixie Linder. To me music always works best when it serves a function on a deeper level.

VK: Before starting the shooting, did you have all the visuals in mind? 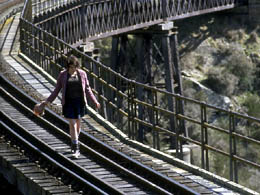 BMcG: Yes and no. There’s no way you can have it all mapped out in your head, and if that is the case it would make the filmmaking process really dull for everyone but the director. I tend to work collaboratively, although I do have certain ideas about the “philosophy” of the visual approach before shooting which usually comes back to character or theme. As long as you have a rationale or some kind of approach, things usually fit into shape. That also includes who you bring on-board and why you chose to work with them in the first place. Those executive choices about crew have a huge impact on the creative result.

VK: There are no evil characters in the film. Even Jackie is redeemed by Paul’s final hug. Indeed, the story is more about these characters than about a crime. What was your first position regarding the characters?

BMcG: The murder-mystery genre usually dictates that at some point the film is going to play into the good-versus-evil paradigm which I was really against doing. I don’t see the world in those black and white terms, so it was really important that the finger couldn’t be pointed at any particular person, and if so, it would be done with utmost empathy. I wanted to somehow make a murder-mystery where everyone and no one is culpable, where Celia’s death was a collective result of the secrets and lies that surrounded her character, and the breakdown of communication. This was especially important to me given that we live in a world that is obsessed with finger pointing. My policy is never to judge a character; I always look for what makes them human regardless of their actions.

VK: The film has a lot of critical American cinema in it. I think of Terrence Malick and Clint Eastwood. Which are your cinema references?

BMcG: Thank you for Malick! But Clint Eastwood? I think I mentioned them earlier. Other filmmakers/writers include Dennis Potter (for the musical quality of his narratives), Krystof Kieslowski (for his visual poetry), Ken Loach (for his unrelenting realism), Atom Egoyan (especially The Sweet Hereafter), Ang Lee (especially The Ice Storm), early Roman Polanski such as Cul-de-sac and Knife in the Water (for their atmosphere and economical storytelling).

VK: Are you already working on a new project?

BMcG: I have a few ideas that I am exploring. I would love to do a film that uses teenagers as a key component, and that is set in a warmer part of New Zealand! I’m currently putting an idea together.