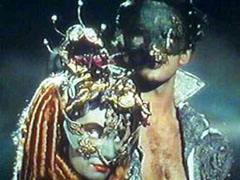 … the whole thing seems to be the product of an aberrant, second-rate imagination that confuses décor with art.

… As I said, it’s a dance opera. And quite stunning… It is not necessarily easy. But just because it isn’t easy doesn’t mean it isn’t worth the effort. See it. And stay with it. It is an incredible work of the imagination of those who were behind the scenes. Don’t deny them entry into your lives.… And do you know who the greatest fan of this film is? Martin Scorsese. He’s studied it, he’s seen it many times. And if it’s good enough for Martin Scorsese, it’s good enough for me.

Pauline Kael is probably partly correct when she describes Michael Powell and Emeric Pressburger’s The Tales of Hoffmann as resulting from an imagination that she calls “aberrant”, in as much as this amazing film often shoots off, digresses in startling directions, delivers wayward flourishes, transports us to unexpected places.

And not one of those places is at all real. The locales, per se, are fabulously fake, almost mirages of tricked-out fabrication, artful décor fused into decorative art that’s still somehow always being staged rather than seeming stagy. The whole ravishing mise en scène unravels like a bewitching brand of primitive live-action cartoon. There are actual people here, yet they’re stylised almost like creatures in some ancient Asiatic-Slavic shadowplay – not really of this world, human and yet all-too-unhuman.

Furthermore, the artistic vision steering us here (and there and everywhere throughout the constantly transforming diegesis) is anything but “second-rate”. As the inestimable Bill Collins so fulsomely attests, this is an ambitious piece of truly inspired fantasy, absolutely first-class, and an astounding aesthetic experience that overlays the visual language of ballet with the sonic forces of opera. All wrapped up in, and fluidly morphed via the magic properties of cinema, properties that can only be best explored and captured by genuine magicians.

And what a cast and crew of eminently skilled conjurers were assembled here! Coming only three years after their remarkably successful backstage “dance-ical” (and career-biggest international hit), The Red Shoes (1948), Powell and Pressburger recruited a number of key personnel from that crowd-pleasing enterprise to collaborate on an even bolder new venture. This was to be a film version of Jacques Offenbach’s tunefully popular but also narratively strange and mysterious operetta about an eponymous poet and three of his great (and tragically doomed) love affairs with a courtesan, an opera singer, and a wind-up doll.

But what was quite a universally palatable feast of colour and movement in The Red Shoes becomes in The Tales of Hoffmann a much more physically and emotionally jarring and sometimes quite upsetting sensory overload. What Bill Collins and others define as a “dance opera” may sound a diverting conceit. The viewing reality – or wilfully unreal surreality, as staged by Powell and Pressburger – is quite a different matter…

The opening titles over Beecham’s orchestra tuning up announce “A Fantastic Opera” which carries the potential for not only fabulously concocted dreamscapes but also could imply an invitation to the devilishly contrived worlds of nightmare. Consequently, for every exquisitely rendered version of “The Enchanted Dragonfly Ballet” (superbly danced by Shearer in blue-green-on-coffee-toned glitter) we get, for instance, the first episode concerning Olympia (Shearer again with suspiciously perfect porcelain features) framed in resolutely lurid shades of violently clashing golds and purples, The “look” isn’t necessarily a “good” one because it’s all-too-clearly not meant to be so. By the time mechanical marionettes have turned into a twirling human chorus (and then back again), the alarming “scenic” shifts and changes have prepared us for the ghastly spectacle of Hoffmann’s first love being dismembered into robotic bits and pieces before our very eyes. Comic opera meets splatter pic? Méliès and Clair interweave with Cocteau and Lynch.

And (so much) more is still to come. From a kind of Russian folktale-land we move to a wonderfully configured Venice where the gorgeously haunting “Baccherole” duet for two female voices has now become shapely, double-imaged Ludmilla Tcherina’s narcissistic femme fatale, delivering a literally duplicitous aria for ego and alter-ego. Next we see carousing, copulating couples surround a smitten Hoffmann who, in a state of tumescent frenzy, all but soars through a sensually piercing version of “Diamond of Fire” while an ever-present sinister machinator (immaculately incarnated by a lithely lizardy Robert Helpmann) conjures genuine gems out of melting candle wax.

Later, in the film’s most austerely fanciful sequence involving Anne Ayars as Antonia, a sickly singer in love with a now rich and famous Hoffmann, we’re offered the, at times, distressing spectacle of someone fanned by the flames of glory and ambition who’ll sacrifice everything for the coldly comforting rewards of Art. Again Helpmann’s ubiquitous manipulator is on hand (like Anton Walbrook’s Svengali-esque entrepreneur in The Red Shoes) to lure our sweet-faced twenty-year-old prodigy into a pitch of anxiously conflicted transcendence that goes beyond mere mortal matters (like loving Hoffmann) and which can only end in a kind of ecstatic self-(de)-termination. At one climactic point the action transposes us to an ancient Greek amphitheatre and onto the ageless, eternal arena of all performance, the seminal originary home of the performing and dramatic arts (including, by extension, film).

Our journey across Hoffmann’s “three magic visions” ends with a two-part epilogue, of sorts. The first section reprises Hoffmann’s fatally feminine trio who are joined by an extra fourth entity, all four paired up for a quartet of spinning pas-de-deuxs which finally blend into just one couple performing beneath four floating shafts of blue chiffon, before advancing toward an infinite horizon. The second section, a kind of cruelly ironic coda, brings us back to the by now drunkenly disillusioned Hoffmann, once again abandoned by his current object of desire (Shearer as the professional star danseuse who had much earlier enchanted us as a dragonfly). A tavern door closes on him, we return to Beecham wielding his conductor’s baton, and, out of nowhere, a rubber stamp “brands” the whole multi-media, multi-cultural polyglot of a production as “MADE IN ENGLAND”.

That defiantly specific branding could be seen as, once and for all, refuting François Truffaut’s infamous claim that British cinema, as such, was a contradiction in terms (4). For what Powell and Pressburger have impressively created in The Tales of Hoffmann is something that rapturously rises above the terms “British” and “Cinema”, something arguably more aligned to what Richard Wagner was trying to realise in his concept of the Gesamkunstwerk or “total art work”, wherein the three major strands of dance, song and drama merge into an intensely resonant composite, totalising whole. The Tales of Hoffmann, like later, headily potent, initially much-misunderstood “all-in-oner” masterworks, such as Jacques Demy’s Les Demoiselles de Rochefort (1967), Herbert Ross’ Pennies From Heaven (1981), Francis Ford Coppola’s One From the Heart (1982) and the recent Robert Rodriguez/Frank Miller joint effort Sin City (2005) aims, with uncompromising focus, at stretching the film medium to new levels, new registers, new joys.