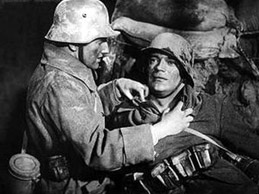 History speaks in G.W. Pabst’s Westfront 1918 and not only through its setting during the “war to end all wars”, that nightmare of impersonal and random death on an unimaginable scale which claimed over 11 million lives and left another 20 million wounded, not to mention uncounted victims of typhus, cholera, and influenza. Pabst’s adaptation of Ernst Johannsen’s novel also reflects the bitter pessimism, and the sense that social life was coming apart, which characterised the late Weimar period; while the German economic crisis of 1918 spoke directly to the global crisis in 1930.

At its premiere in Berlin on 23 May, 1930, the film’s unsparing realism reportedly caused “up to 20 people” to faint (1), while the Berlin correspondent for the New York Times dubbed it “the most vivid argument yet contrived against war. A book or a speech are cold, dead things beside it” (2). Such was its impact that the film faced a storm of protest, both from the right for its alleged defeatist view and from the left for its refusal to deal with the causes of the war. In less than three years, the Nazis would take power and immediately suppress Westfront 1918 and most of the 30 other films that dealt with the war. By 1995, however, it was chosen as one of five Pabst works among the 100 Most Significant German Films, a list collected from filmmakers, film historians, journalists, and editors, and published by the Stiftung Deutsche Kinemathek (3).

Around the world, Westfront 1918 and All Quiet on the Western Front (Lewis Milestone, 1930) both touched a public nerve but from different angles. (In Europe, Pabst’s film played in theatres six months before Milestone’s, but in America it was the Hollywood production that created a sensation six months before the German film was seen.) All Quiet on the Western Front recounts the progressive loss of youthful ideals, from the initial indoctrination of nationalist patriotism in the schoolroom to the last breath on the battlefield. War is the problem: the final message suggests that without war’s intrusion, life for its naïve schoolboys would proceed satisfactorily. In Westfront 1918, however, the war exists as just one symptom of a corrupt bourgeois society that is gripped by economic injustice and out of control.

To Pabst, war is a problem of staying alive within the grinding gears of the military juggernaut. His story of four German soldiers refuses to aestheticise the destruction into visual beauty or to traffic in symbols, allowing no suggestion that the war has somehow cleansed or fulfilled individual destinies. In contrast to Milestone’s harrowing but showy display of technique, Pabst deromanticises the combat by withholding all satisfactions of the action film, allowing no scenes to be shaped where the violence makes a narrative point. The destruction respects no heroic conventions, with death raining downward and detonating upward without announcement or impacting on the plot. With only trenches and desolate foxholes for protection, Pabst’s soldiers are exposed to spasms of random danger where anything could happen.

Pabst’s realism extends to the uninflected narrative, which avoids a linear plot structure, proceeding instead in loosely-connected episodes involving four comrades. From the opening camaraderie in a French village billet, the scene shifts to soldiers waiting for rescue as they struggle to hold up a collapsing bunker (presaging the claustrophobia of the trapped miners in Pabst’s Kameradschaft [1931]), then to the company withstanding attack by friendly fire.

While identifiable types, these common men are all stoic adults who act on their own; they are not green recruits or sentimental stereotypes. Thus, the Student sidesteps duty to pursue a French girl; Karl the Berliner seeks to recapture the illusory security of home and hearth; the Lieutenant goes mad trying to serve the military power structure; and the cynical Bavarian sings a mordant ditty (“Never leave your house and home or a cold grave will be yours”) as he casually picks lice out of his uniform (clearly powered by racial prejudice, he calls coffee “nigger sweat” and only moves to wield his dagger when he spies a black African soldier).

When Karl returns to Berlin (“What’s the use of leave when everyone at home is starving?”), urban miseries greet him, as people stand in breadlines (recalling Pabst’s first major success, Die Freudlose Gasse [The Joyless Street] [1925]) and spare no pity for the mother of a slain hero because all have sons who died. After a portly burgher complains that the military are not winning (“When are you getting to Paris?”), Karl discovers his wife in flagrante delicto with the butcher’s assistant (“He brought food with him”). Pabst moves in on Karl’s face for the film’s first close-up, but it is compassion for the wife’s shame that informs the sequence, as she begs for some sign of forgiveness that Karl is unable to give.

Realising that the home-front offers no escape from the anxiety of the front-lines, Karl returns to the trenches in existential crisis, knowing that the war will swallow him up. Remarkable among the unsentimental performances here is the naturalistic acting of Pabst’s longtime colleague Gustav Diessl, who had himself spent a year as a prisoner of war and who would serve the director in seven films (4).

Pabst’s sound film debut, Westfront 1918 combines the most advanced camerawork developed in the silent era and the authoritative montage learned from the Soviets (including Eisenstein) with sophisticated sound strategies, using natural sounds – from whispers to whistles to blaring sirens – for subtle transitions. Unrelieved by music, the stark mood lifts only for an entr’acte sequence of front-line music hall performances (also providing Pabst with a handy occasion for several leering appreciations of a performer’s silk stockings and high heels).

When the final assault begins, it sweeps across increasingly epic vistas, composed in depth through multiple planes of action. The camera tracks through the trenches, from a high angle and far back, anticipating the pitiless objectivity of modern surveillance. Space on the battlefield holds no possibility of liberation or escape (there are no vanishing perspectives), but rather a disorienting exposure that offers no place to hide, with only man-made obstacles of barbed wire emerging through the clouds of smoke.

The brilliant lighting of Fritz Arno Wagner – collaborator of Murnau (Nosferatu [1922]) and Lang (M [1931]) as well as Pabst (Kameradschaft, amongst others) – somehow maintains a credible impression of night-time while flooding a figure with light of exceptional clarity, and memorably transforms a man’s face into a death’s head by simply lessening the illumination. Though Pabst generally practices “a kind of photographic realism that completely rejects the subjective camera of Murnau and Freund” (5), the director films a lumbering tank from the viewpoint of a fallen soldier threatened by the awkwardly moving beast, a frightening harbinger of the coming mechanisation of warfare.

If Pabst holds out any hope, it is for an ideal of international brotherhood absorbed during the four years of World War I that he spent as an enemy alien in a French P.O.W. camp. Pleading the cause of common citizenship, Westfront 1918 ends on a French soldier clutching a German’s hand, a prelude to Kameradschaft (and a motif seconded in Victor Trivas and George Shdanoff’s Niemansland [1931]) (6).

Modernist in its unsparing desolation and its rejection of melodrama, Westfront 1918 has scarcely dated in its picture of total war that ends in death and madness. With a raw directness of experience far from the modern postures of irony or heroism, it still speaks as a cautionary reminder from history that powerless humans, not action figures, fight our wars.