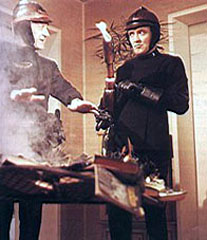 Against the backdrop of a stylish but affectless future world, Fahrenheit 451 tells the quintessentially Truffautian story of Romantic self-fashioning via the reconstruction of the past, here embodied in literature and storytelling. The will to narrative is construed as flame-like: consuming and destructive, vital and ignoble, yet capable of achieving miraculous, phoenix-like rebirthings. This article looks at some of the ways these ideas are expressed through the film’s engagement with books.

“There will be as many literary references in Fahrenheit 451 as in all Jean-Luc’s eleven movies put together”, Truffaut wrote, gleefully (1). The selection of books seen and burned in the film is significant on many levels (2). Its eclecticism proclaims that true reading is omnivorous, arbitrary, feeding on unmemorable thrillers and dull treatises as well as classics and personal favourites. The latter are well represented in the film, with books by Balzac, Proust, Genet, Audiberti and Henry Miller alluding to Truffaut’s own tastes. Some titles burned are associated with censorship controversies: the appearance of The Catcher in the Rye, Justine, Mein Kampf, and My Life and Loves taking Fahrenheit 451 into territory some critics find ideologically incoherent (3). But those burnings of nominally subversive books are strung together with an affectless impartiality that makes full use of the uncomprehending mechanical gaze of the camera, implying that the movie’s world is beyond knowing or caring. One sequence sandwiches a shot of an obvious signifier of censorship (a smouldering still from Rivette’s then banned Diderot adaptation La Religieuse, 1965) between the burnings of an anodyne primer (Look With Mother), and a book about billiards (In Ze Pocket), as if there were no difference among them worth registering. The static quality of the attention given each book drains controversial texts of a certain frisson and thus their identity; thus, associations the spectator tries to attach to these books are negated, resulting in a curious sense of estrangement which is a key feature of effective science-fiction.

The movie is excited by books as empirical and material things, too. Nicolas Roeg’s tremendously flat and hard-edged Technicolor cinematography is, arguably, better adapted to the surfaces of books than to the surfaces of actors, interiors and landscapes, which come off looking comparatively bland.

I have noticed only today that letting books fall out of frame doesn’t work – I have to follow their fall right to the ground. In this film, books are characters, and to break their flight is tantamount to leaving an actor’s head out of the picture (4).

Books are hidden, revealed, furtively or openly handled, fingered, riffled, torn, burned. People throw books out of windows, at heads, secrete them in pockets; they slot them into toasters and roll them up inside vases; they hoard them inside dummy TV sets, heaters, clocks, laundry baskets, light fittings, cocktail cabinets, and scoop whole shelves to the floor. A book materialising in a dream flaps ominously round the room like a demented albatross. Like an overripe seed pod, a transparent white bag full of books hits the asphalt and bursts. Trainee firemen learn their trade by manipulating blank and uncontaminating book shaped objects. Kerosene-soaked pages curl, swell, break apart; fragile paper dust jackets detach themselves and float off on the breeze, and hard, cold, jittery winds, for one nightmarish minute, force themselves between the pages of a deluxe edition of Dali’s paranoiac-critical paintings.

Conjoined with the movie’s obsessional book collecting is its manipulation of the spectator’s urge to read all writing appearing on screen. We are pre-sensitised for the scarifying impression of print, as photographic emulsion sensitises the plate, by a staggering demonstration of what it means to be deprived of it: the famous opening credits, which are not written, but spoken over a string of zooms into bright coloured monochrome stills of television antennae atop suburban houses, offer a startling and disorienting opening. When printed pages do finally fill the screen with legible type, they fade before our eyes, as fire turns the white paper black, and we race against the flames and compulsively read the words. The movie makes the spectator scan several book pages, notably the passage in Lolita where Humbert plays with the syllables and variants of the titular character’s name, and a passage printed in Russian, where one word set in an alien text is sufficient to catch the eye and identify the book (Karamazovy).

Involuntary reading is behaviour comprehensively mirrored for the spectator by the movie’s protagonist, who is a compulsive reader of books as well as a thief and hoarder of them. If the library assembled by the movie is expressively random, Montag’s “special” books are overdetermined with meanings. Having “stolen” a book about Gaspard Hauser from under the very nose of the pontificating Fire Captain, Montag uses books to move from a pre-linguistic Wild Man existence to the promise of a fully formed interior life (his final totemic choice of book is Poe’s beautifully named Tales of Mystery and Imagination). Montag’s epiphany descends from the first book he reads, which is David Copperfield (in contrast to Bradbury’s novel) (5). When Montag sits down with David Copperfield, the blank TV screen lighting the page, Truffaut refrains from attempting to plunge into the interior of the character, preferring to give us a sensitively photographed and edited picture of the words that are being read on the soundtrack. Hesitantly, Montag the novice reads out every bit of print including the book’s full name, and the name and address of the publisher. As he commences the first chapter – “I Am Born” – the camera moves in to look over his shoulder at the lines of type, cutting twice to ever-tighter framings, whipping back to follow the motion of the finger the reader places under the words and the travelling eye that takes them in, staying with him, at his pace, to the end of the first paragraph.

David Copperfield sets in motion quiet chains of thought suggesting the artist’s creation of himself is tied to his entry into the Symbolic: “To begin my life at the beginning of my life….” Truffaut includes this novel because it is about “the drive to tell a story…the will to narrate, the storyteller’s destiny” (6). The camera records what is seen by the eye at the moment of its birth into the world of Fiction, and the new-born eye is innocent (7). This is a key trope for both Dickens and Truffaut. Their child(like) heroes learn to image, or imagine, the realm of understanding alluded to by writing, via processing that writing as a fully visual or graphic object. This mysterious leap is what allows the initiate to discover what he is, to place himself among the unimaginable, intangible narratives of long ago and far away (8).