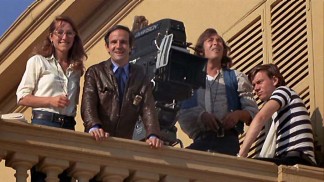 There is so much that one can say about Day for Night. However, since it is impossible to mention every fine performance and notable scene, whether comic or melodramatic, I simply will not try and will rather focus on a single aspect: the central position the film takes in the life and work of François Truffaut.

Like Federico Fellini’s 8½ (1963) and Jean-Luc Godard’s Le Mepris (1963) before it, Day for Night is a film about making a film. However, the tone of Truffaut’s film is far removed from the introspection and lofty artistic ambitions of Fellini’s film in this mode and the cynicism and alienation of Godard’s. Telling the story of the production and ‘shoot’ of a run-of-the-mill European co-production entitled Je vous présente Paméla, Day for Night is rather a heartfelt love letter to the cinema and the people who work in it. It is also one of Truffaut’s most personal films. Indeed, he not only co-wrote and directed it, he also plays Ferrand, the director of the film within a film, with great self-effacing charm.

This naturally gives rise to the temptation to view Ferrand as Truffaut’s direct surrogate, and there are indeed some important similarities. Both for example, have poor hearing due to their time in the army. Furthermore, when a producer asks Ferrand why he does not make political or erotic films, one is reminded that the same criticisms were frequently levelled at Truffaut, particularly after the events of 1968. However, there is also a key difference that adds greatly to the richness and complexity of this deceptively simple film. Truffaut was an auteur (he practically invented the term) who only made films that he wanted to make. Ferrand, on the other hand, is a mettuer en scène, a director for hire who has given up all hope of ever creating art, and whose ambition now stretches no further than just finishing a film.

Two things are remarkable about this. Firstly, there is the irony that Day for Night is a film that could only have been made by Truffaut, yet it is about a film that could have been directed by just about anyone. More important though is Truffaut’s total unwillingness to look down on the character he is playing as an “inferior” artist or person. On the contrary, Truffaut publicly defended both his on-screen character and the film he was making, “claiming a nostalgia for films that are not afraid to tell a story and that have no qualms about being melodramatic” (1). It would seem that time and first-hand experience of the perils of the film industry had mellowed the former enfant terrible of French film criticism who famously wrote in the mid-1950s that he did not believe in “the peaceful co-existence of le cinéma du qualite and le cinéma d’auteurs” (2).

Finally, there is a strong kinship between the real Truffaut and the fictional director he plays. In the film, Ferrand is troubled by a recurring dream (shot in black-and-white) in which he sees himself as a young boy, stealing stills from Citizen Kane (Orson Welles, 1941) from a cinema lobby. This is not only a veiled reference to Truffaut’s own delinquent past, once again linking the character with the actor-director, but is also references Truffaut’s assertion that Welles’ film had “inspired more vocations to cinema […] than any other” (3), his own included. Yet how many of those aspiring filmmakers went on to make work comparable to that of Welles? Truffaut perhaps did, but hundreds more did not. As Roger Ebert notes, “The parallel is clear. As a youth, Ferrand dreamed of being another Welles, but now he’s pleased to simply work in the same industry” (4). In a way, Ferrand is a reflection of what Truffaut could have been, and would not have been ashamed of being. Ferrand, like Truffaut, lives to make films, and if the real-life director had the uncommon luxury of picking what those films were, he, like Ferrand, would still prefer to make bad or ordinary films rather than make no films at all.

Watching the film, it is perhaps easy to see why. Although he shows us the lows as well as the highs of filmmaking, Truffaut’s love and affection for both the medium and the “family” he surrounded himself with is utterly infectious. From the opening scene, in which a dramatic confrontation between two men, one old and one young, is interrupted by a sudden shout of the word “cut”, Truffaut invites the viewer to share in the filmmaking process and reveals the tricks of his trade like a magician might after a particularly complex illusion. Truffaut shows us what a key grip does, tells us about the differences between direct sound and post-synchronisation, reveals how a thick blanket of snow is created at the height of summer (it involves fire hoses and an industrial amount of detergent), and in one particularly interesting scene reveals the meaning of the film’s title.

In this scene Ferrand tells his star, Julie (Jacqueline Bisset), and her male stunt-double that the car crash sequence scheduled for the next morning will be shot in “La Nuit américaine”. This term, which gave the film its original title, is the French language equivalent for “Day for Night”, the technique of shooting in daylight but making it look like night through a combination of filters, under-exposure and specific printing techniques. Although Julie is bilingual, she is unfamiliar with the term, and there is a momentary breakdown of communication between director and star. She translates his words literally, coming up with the seemingly meaningless but ultimately very telling phrase, “American night”. This indicates, on one level, just how synonymous the terms “américaine” and cinema are, even for the French. However, it also highlights the façade of Hollywood, and the commercial cinema in general. Cinema is not as Godard put it, “truth at 24 frames per second”, but an elaborate series of illusions made to look like reality. Night-time scenes are shot in broad daylight; men double for women, and so on. But while there is something very artificial about making day appear as night, there is also something very magical about it, and it is to the everlasting credit of Truffaut that his film focuses on the magic of cinema, not the deceit.